Which NFL fans are the most loyal?

NFL fans live and die by Sunday Night Football, but you don’t just watch for fun. You watch to support your favorite team.

Each team has a distinct image – impacted by location, performance, players and fanbase. Brands use Relative Insight to uncover the unique opinions and preferences of audience segments. We wanted to do the same with fans.

Using Relative Insight, we compared sub-forums specific to each NFL team to learn how conversations differ. These forum users are all NFL fans, but their franchise allegiance defines what they talk about and why. By comparing fanbases using audience insights analysis we can uncover the differences in the topics, words, phrases, grammar and emotion they use.

We can expect all NFL fans to use universal football terms like quarterback or touchdown, which don’t tell us very much about each unique fanbase. That’s why Relative Insight goes beyond frequency analysis. Through comparative analysis, we can weed out those expected conversations to reveal what’s different.

We chose seven teams to highlight. Here’s what we found:

After overcoming controversy in 2020 that resulted in a name change, The Washington Football Team faced another scandal in October. The US House of Representatives investigated the team after former employees came forward alleging a toxic workplace, including sexual harassment and racism. Many Washington fans stopped supporting the team, calling the situation disgusting and shameful. 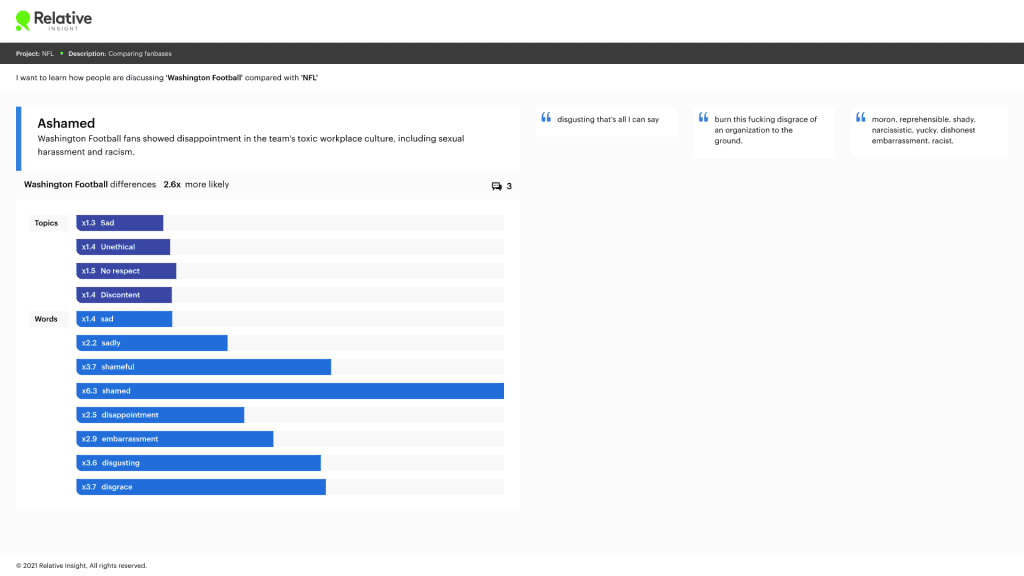 The Packers also alienated some fans after recent controversy. While the NFL does not enforce a vaccine mandate, the Packers were fined after star quarterback Aaron Rodgers failed to follow COVID protocols for unvaccinated players. The scandal resulted in angry, upset and pissed fans – spurring forum conversations about morals and principles. 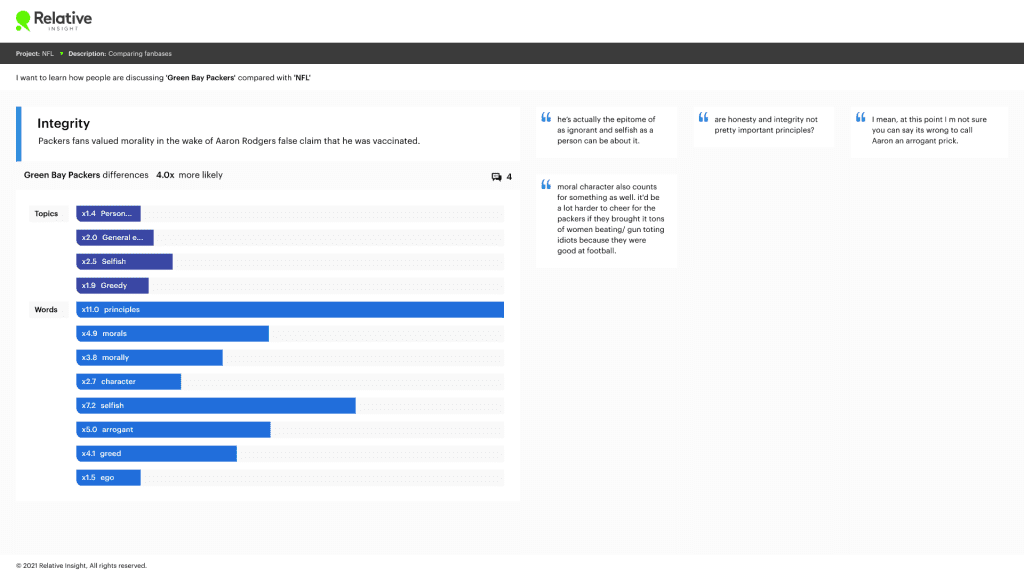 As the most emotional NFL fans we analyzed, Dallas Cowboys forum conversations were more likely to use emotionally driven language relating to happiness, contentment, fear and shock. This range of emotion reflects the Cowboy’s performance. While the team is the top of the NFC East division, they are currently on a two game losing streak.

Patriots fans showed one specific emotion: Excitement. Forum conversations included words like excited, interesting, curious and hype when discussing the team and upcoming games. Considering the Patriots are on a six game winning streak, this optimistic energy doesn’t come as a surprise.

On the other end of the emotional spectrum, Seahawks fans showed very little excitement for their team. Forum conversations included words like bored, tired, stale and predictable in reference to the team’s losing streak and routine plays.

Although the Steelers are also on a losing streak, fans stayed loyal. Instead of showing disinterest, forum users doubled down and made excuses for their team. Fans claimed rain and stormy weather impacted team performance, resulting in bad plays that would not have happened otherwise.

Eagles fans were the most calculated of the teams we analyzed. They were more likely to discuss stats, averages and numbers during forum conversations. These words were often used to a very specific degree, detailing exact numbers to the decimal point. Forum users shared these statistics to support their opinions and game predictions.

Forum conversations and user emotions are heavily impacted by team standing and recent events. While loyal NFL fans will stand by teams during a bad season, social controversies are a sure way to lose support.