Bubbles, outbreaks and the return of pro sports in North America 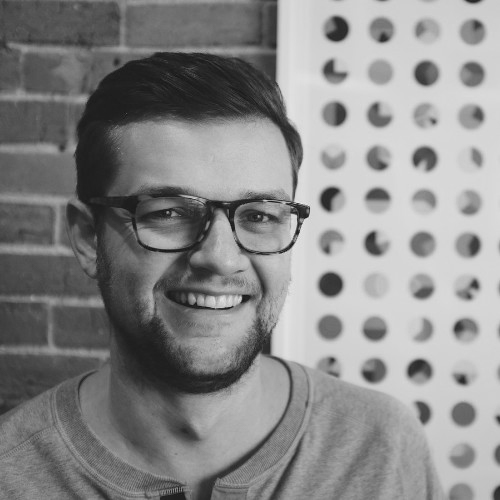 Following the abrupt suspension of play in the NBA and NHL in early March, sport fans rejoiced as play resumed last week. Along with the MLB kicking off an abbreviated 60-game season, this means three of the four major North American sport leagues are back in action. But how have the respective leagues been managing the resumption of action amidst the global pandemic?

While the NBA and NHL have been commended for the early success of their ‘bubble’ models (knock on wood…), the MLB has come under much scrutiny for their decision to allow travel as outbreaks threaten the future of the baseball season.

To understand how the conversation is evolving across basketball, ice hockey and baseball, we used Relative Insight’s text analytics platform to compare media coverage of the three leagues and identify key themes .

NBA & NHL: Life in the bubble

As leagues prepared to restart play, there was a tremendous amount of discussion (and concern) as to how the bubble model would work. Naturally, this discussion has continued as play has started, with the word ‘bubble’ being 6.3x more prevalent in the NHL and NBA media coverage. This comes along with a great deal of discussion around what life looks like for those living within the bubble, with the word ‘inside’ being 15x more common.

While discussion of bubbles does appear in the MLB coverage, it is mostly in (critical) reference to the league’s decision not to opt for a bubble approach. 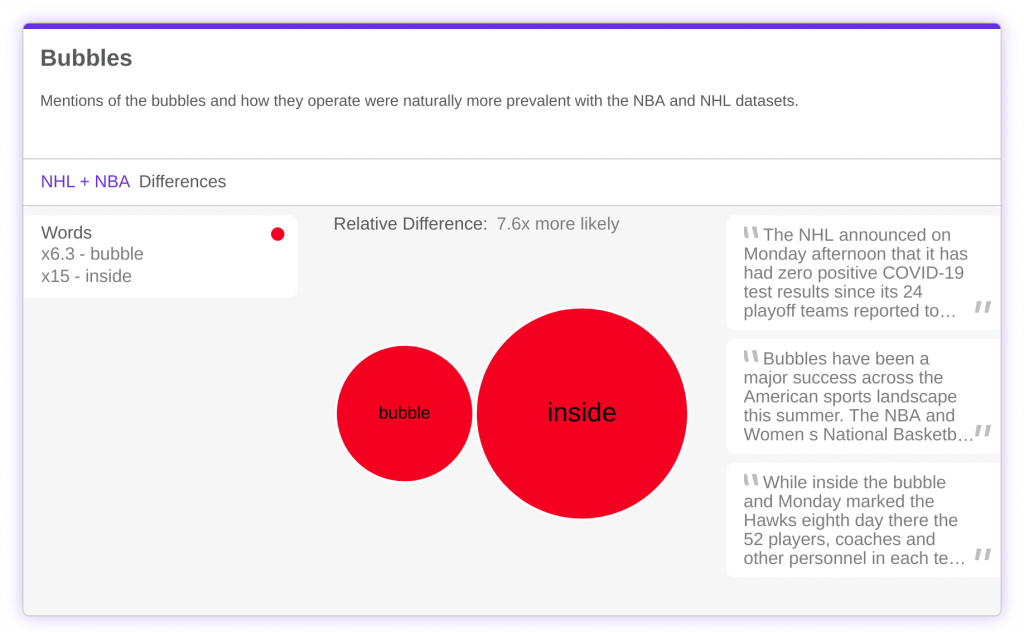 Despite the obvious drawbacks of being separated from family, friends and the outside world – praise has been coming in from all angles for how the NBA and NHL have implemented their bubbles and managed (thus far) to keep players and staff safe.

The words ‘good’ and ‘great’ were far more common among the media coverage of the NHL and NBA than MLB, with ‘happy’ as a topic being more than 10x more prevalent. 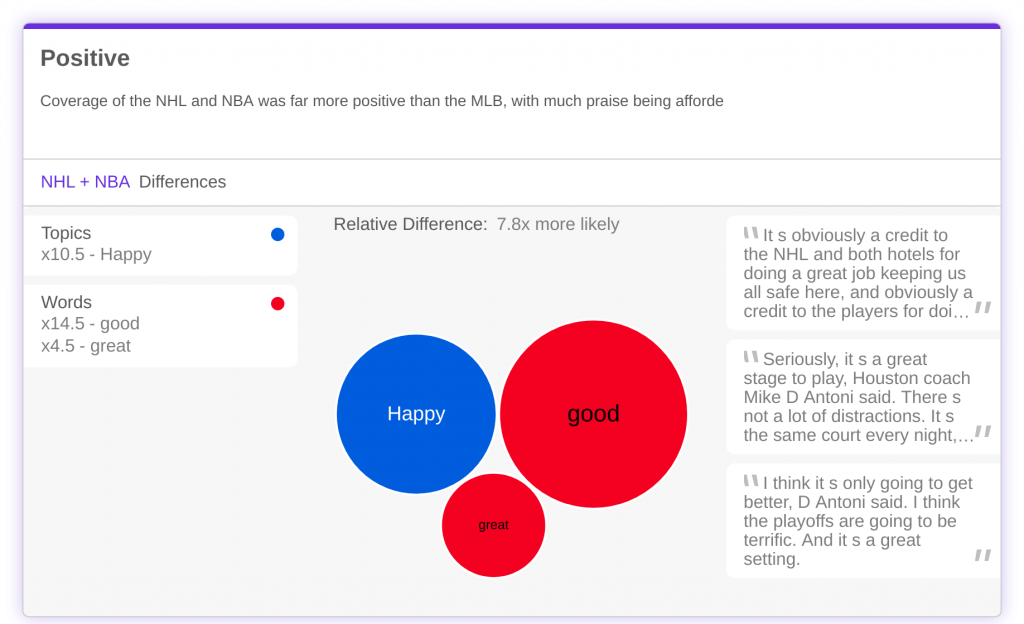 While the NBA and NHL are providing some much needed ‘feel-good’ stories for sport fans, media coverage of the MLB stands in stark contrast with outbreaks of COVID-19 dominating the headlines. 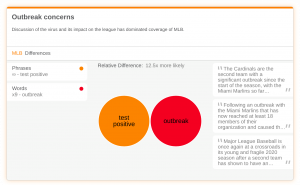 Notably, the phrase ‘test positive’ occurs significantly in the MLB coverage while being entirely absent in discussions of the other leagues. These positive tests have led to several outbreaks within teams and there is a great deal of discussion around the impact of these outbreaks on the ability to play out the rest of the already abbreviated season.

Unfortunately, this has stolen attention away from the baseball itself. 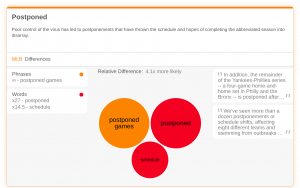 Without a bubble, travel and its impact on controlling the virus has emerged as a common topic in baseball coverage. This highlights the importance of maintaining a controlled environment for player and staff safety as well as the ability to actually play out the season. 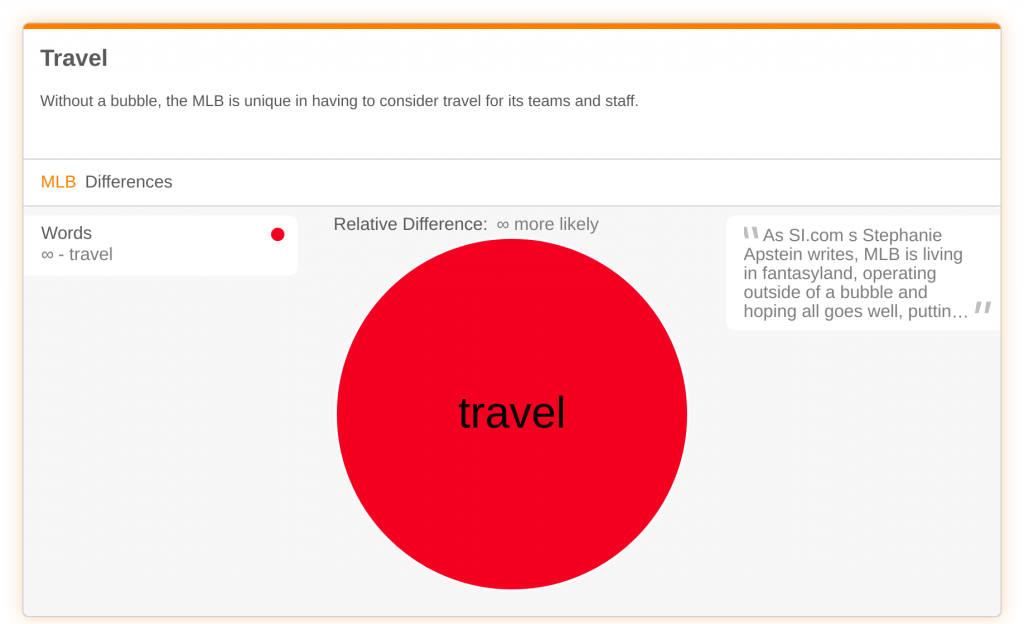 The case of MLB illustrates just how challenging reopening will be for those working in sport, entertainment, retail and hospitality.

Relative Insight delivers qualitative analysis at scale by focusing in on key differences and similarities that reveal powerful audience insights. From decoding survey open-ends to social media analysis, the platform can compare any source of language data.

Tracking the discussion around the Tokyo 2020 Olympics

England vs Italy: Comparing the language of football fans