In the US, 57.5 million viewers watch live sports at least once a month. Within the next four years, that number is expected to surpass 90 million. Now, that’s a lot of people.

All of these viewers enjoy watching sports, but their league of choice says a lot about who they are and what they like. Brands are using Relative Insight to understand differences in consumer preferences, finding unique consumer insights across different fanbases. This enables brands to tailor their sports marketing strategies and communications to align with target audiences.

In this analysis, we pulled social media conversations mentioning the NFL, NBA, MLB and NHL in conjunction with words like sponsorship, commercial and ad in order to identify how consumer opinion on sports marketing strategies differ across leagues.

This form of social media analysis compares conversations between fanbases, helping us identify the unique topics and words used by each league’s viewers. Here’s what we found:

The National Football League is a prime example of the power and relevancy of marketing. The Super Bowl brings in over 110 million viewers and $6.5 million per commercial. This prominence meant that most advertising related conversations centered around the Super Bowl.

NFL viewers specifically mentioned the prevalence of celebrity cameos in commercials for brands like Hellmann’s, whose ad included Pete Davidson. While general opinion was divided on whether this tactic is likeable or overdone, many viewers identified a commercial by the celebrity and not the brand. This proves the power of familiar faces and well-liked celebs. 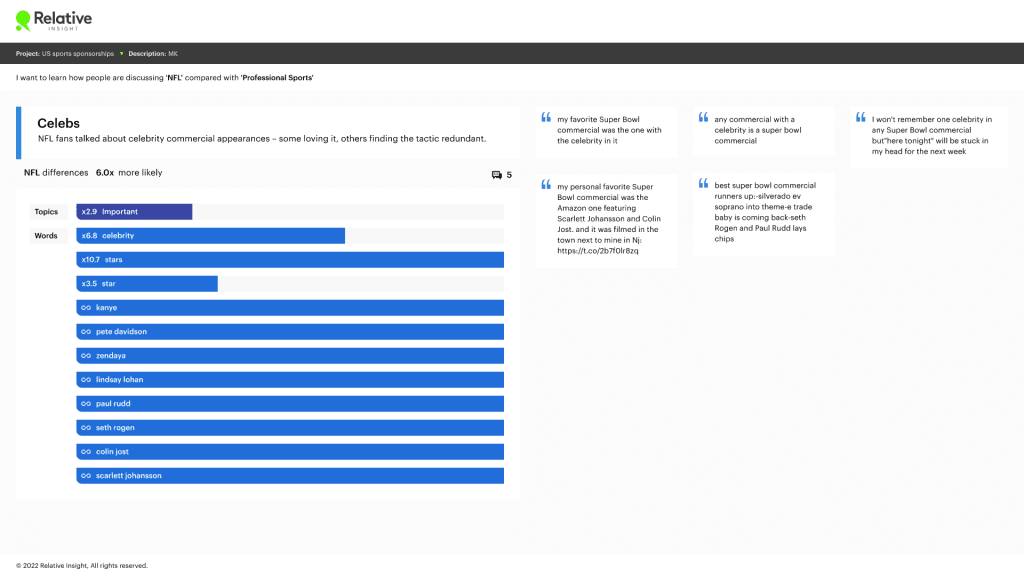 Other brands that stuck out to NFL fans included Coinbase, Amazon, Lay’s, Squarespace and McDonald’s. This insight helps inform sports marketing strategies by demonstrating which types of brands hit the mark with NFL viewers.

Basketball fans found relevancy in an entirely different sect of brands compared to the other professional leagues. They favored sports clothing and beverage brands, including Timberland, Nike, Adidas, Ebay, Mountain Dew and Hennessy.

NBA viewers also preferred commercials that incorporated popular music like Kanye and Doja Cat. They were more likely to mention the words song, songs, album, tune and soundtrack when discussing the ads that they found memorable. 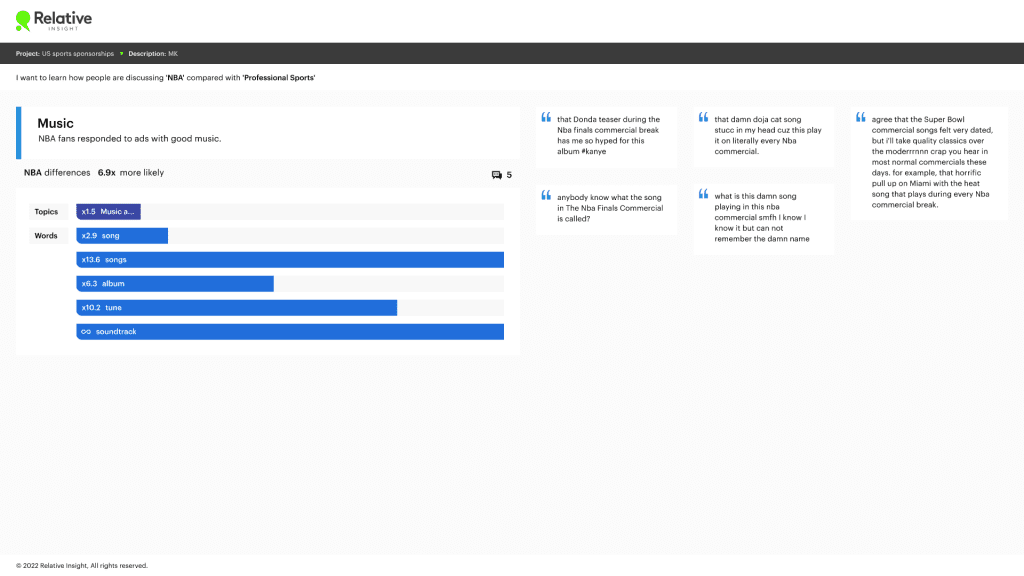 Hockey fans appreciated a wider range of advertisers. We found food, beverage, auto and financial brands mentioned within our analysis of the NHL. While viewers of all leagues mentioned food or drink brands, brands like Dunkin and Tim Horton’s stood out to these fans who likely live in cooler climates. 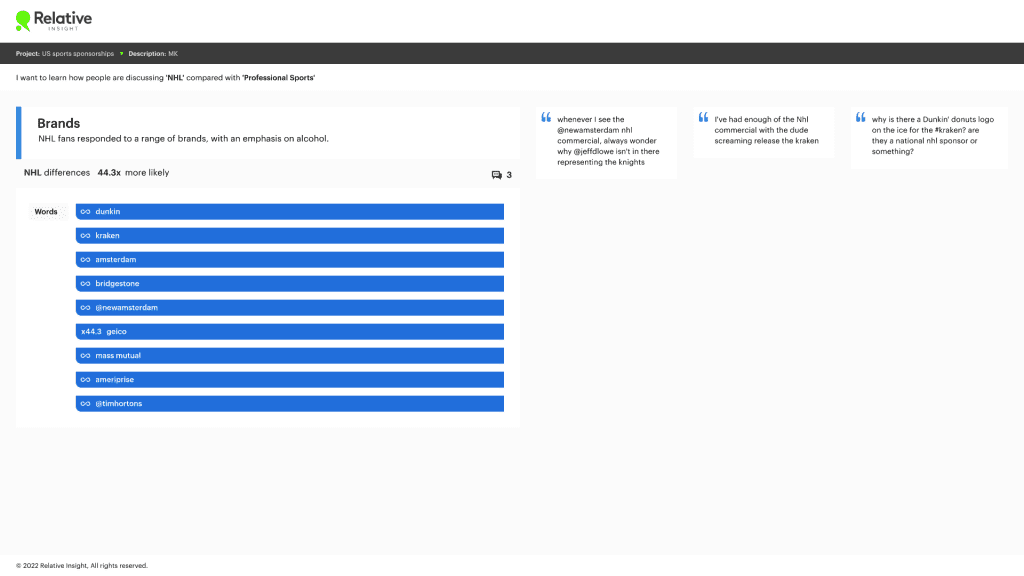 An interesting insight we found was that baseball viewers were more likely to talk about sponsorships as opposed to commercials, which we saw from the other leagues. MLB fans found long term sponsorships more impactful than individual ads, and mourned the end of iconic sponsorship eras. They specifically mentioned brands like Bank of America, T-Mobile, Arby’s and Dick’s Sporting Goods. This highlights how creating an effective long-term partnership with sports teams can be beneficial from both a brand and sports perspective. 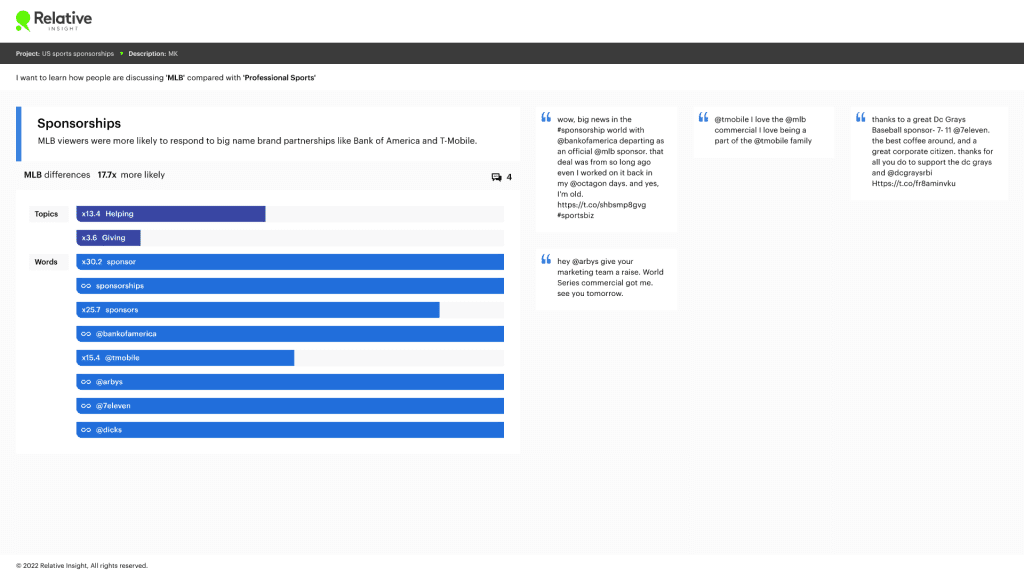 What does this mean?

Text analysis demonstrates how unique each audience truly is. It’s easy to assume all sports fans like the same things, but when we dig a little deeper we can see that’s not the case. We were able to identify specific brands that were favored by each fanbase, an insight which is also useful for brands looking to tap into sports sponsorship as part of their marketing strategy.