As the COVID-19 vaccine rollout encounters distribution problems across America, we set out to understand public sentiment. Are Americans excited for the vaccine? Scared? Ambivalent?

Using Relative Insight, we conducted a social media discourse analysis by taking tweets discussing the vaccine from January 1-20 and comparing them against news coverage of the same topic from the same time period. Relative Insight uses comparison-based text analysis to highlight the topics, words, phrases, grammar and emotion seen in one data set but not the other.

By comparing tweets against news coverage, we can weed out informational tweets – likely seen from media organizations – to reveal the ones truly based on opinion. Here’s what we found:

We saw a range of emotions – Twitter users were happy, sad, afraid, discontent and generally emotional. There was no consensus in terms of public opinion on vaccines. Even those going forward with the vaccine, showed apprehension to receive the newly-developed medicine.

Variations of the word heard were regularly seen from Twitter users, implying the passage of information through word of mouth. Users would qualify their statements by adding I heard… before any information they share which shows a lack of confidence in the information being presented. 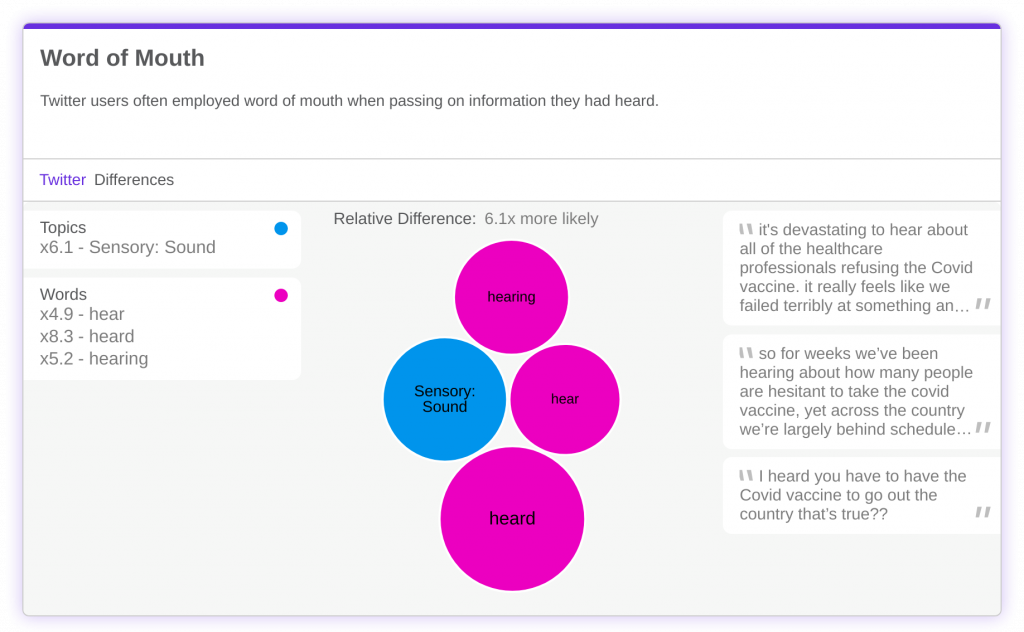 We saw many Twitter users also qualify their statements using I think… This demonstrates that many users were freely sharing their opinion on the vaccine. Other instances of the word referred to other’s thoughts and beliefs. 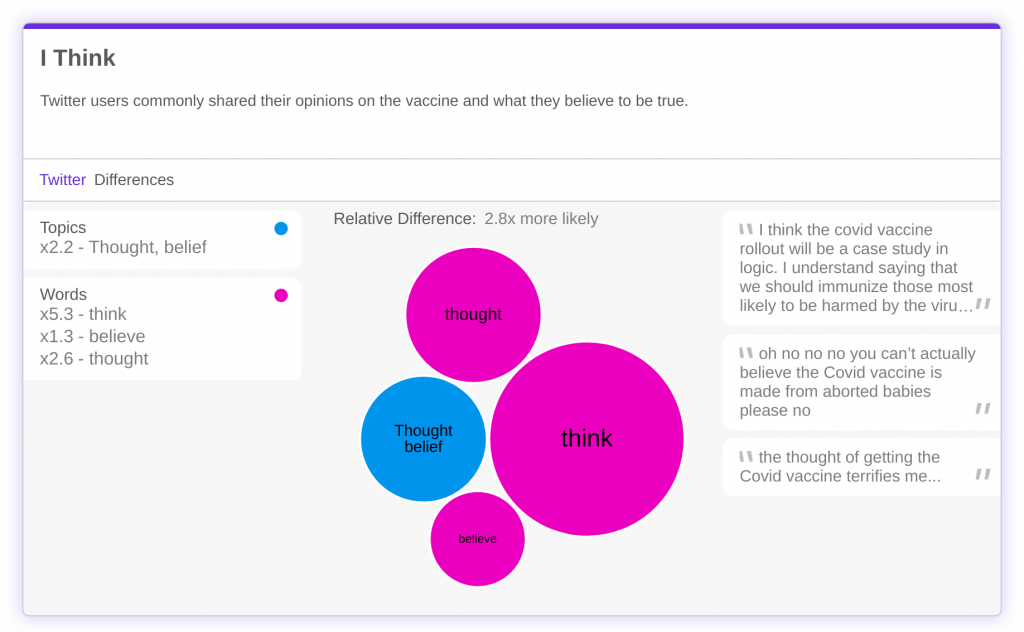 Those in support of the vaccine, did not hold back when it came to addressing anti-vaxxers. We saw words like stupid, idiot, and dumb used as insults towards those who refuse the vaccine. 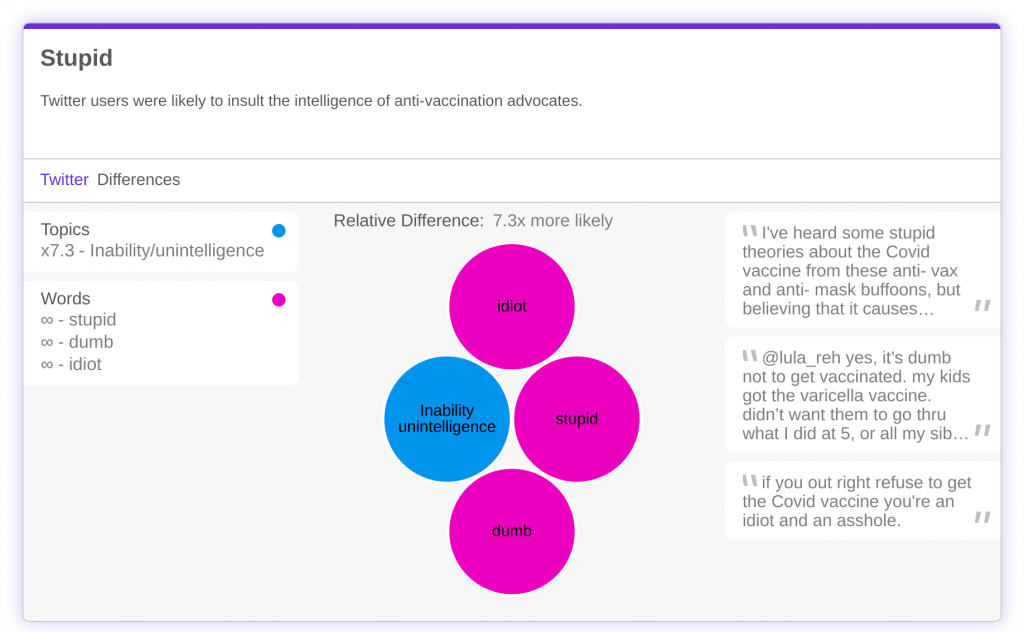 Although not everyone on Twitter plans on getting the vaccine, we saw a generally good response to it across the platform. Using words like good, great, well and best – Twitter users applauded the vaccine in addition to distribution efforts. 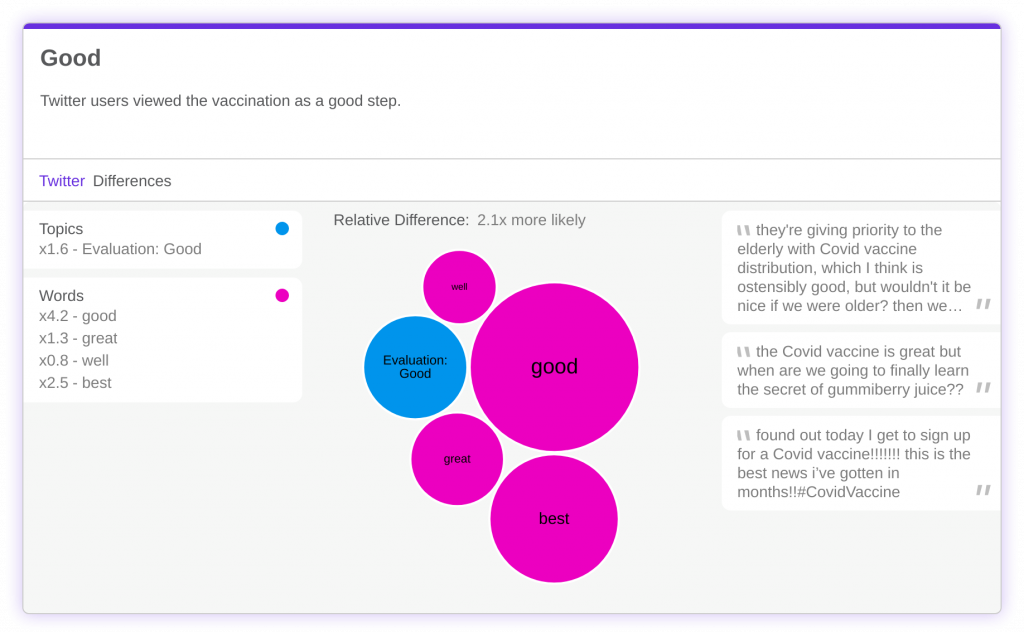 The big question: Are people on Twitter getting the vaccine? Yes, many are. Relative highlighted words like going to and get in many of the tweets we analyzed. Users were proud to broadcast their intention to get vaccination and explain how they came to the decision. 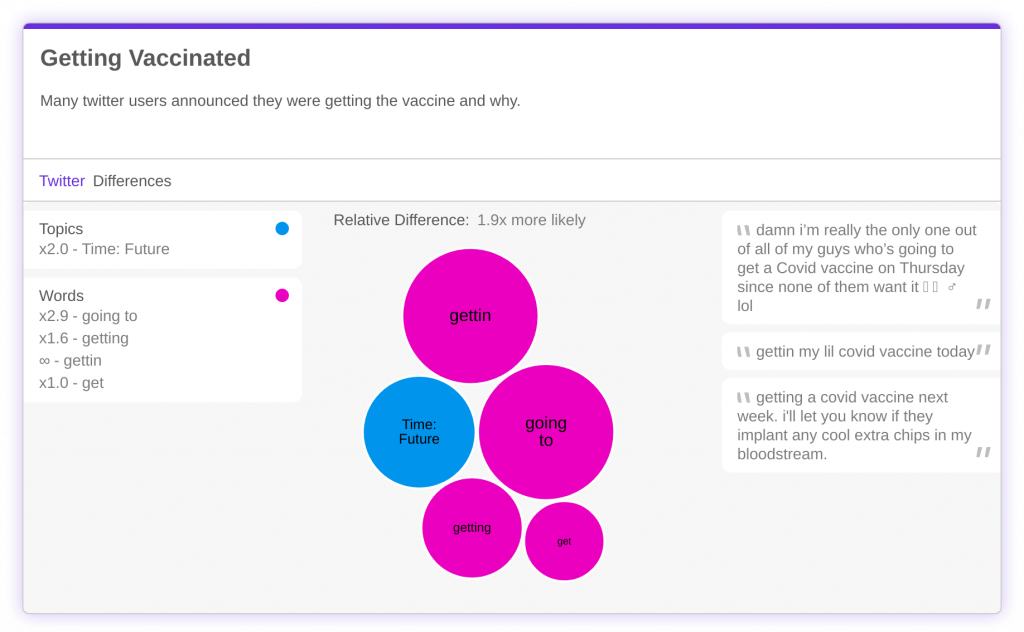 Although we saw many users getting the vaccine, we saw even more Americans concerned about obtaining it for their friends and family. For many low-risk individuals, the priority is to vaccinate older loved-ones. 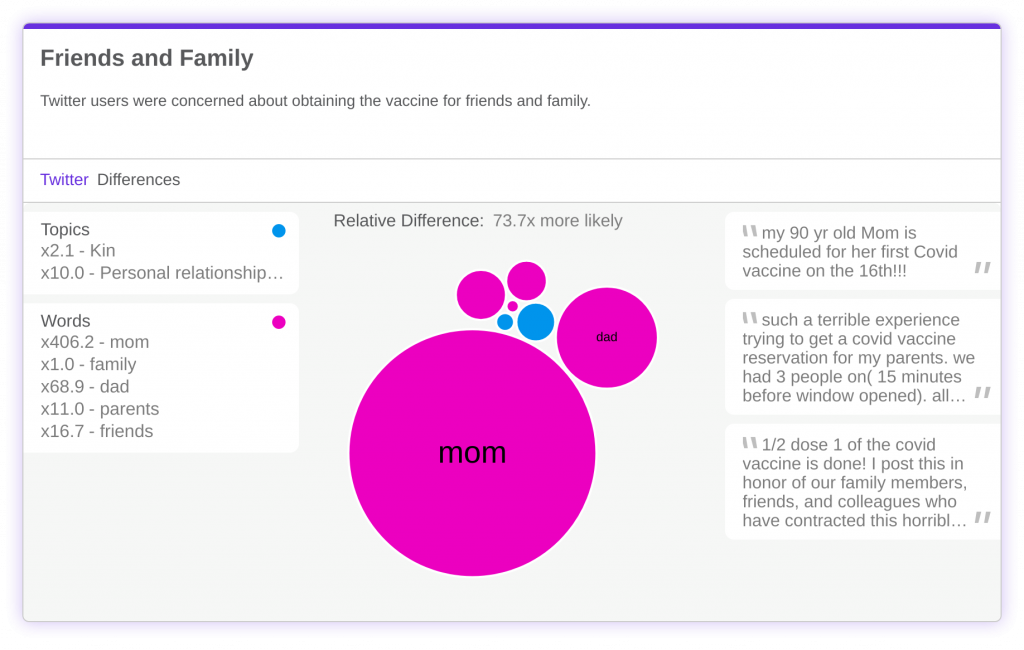 Vaccine misinformation is rampant, and many Twitter users sought to end the lies. Tweets from both sides – pro and anti-vaccination – insisted that the ‘truth’ about the vaccine be made public.

Pro-vaccination Twitter users worked to end the misinformation spread by those in opposition. While anti-vaxxers endeavored to uncover the truth they believe is being masked in the mainstream media. 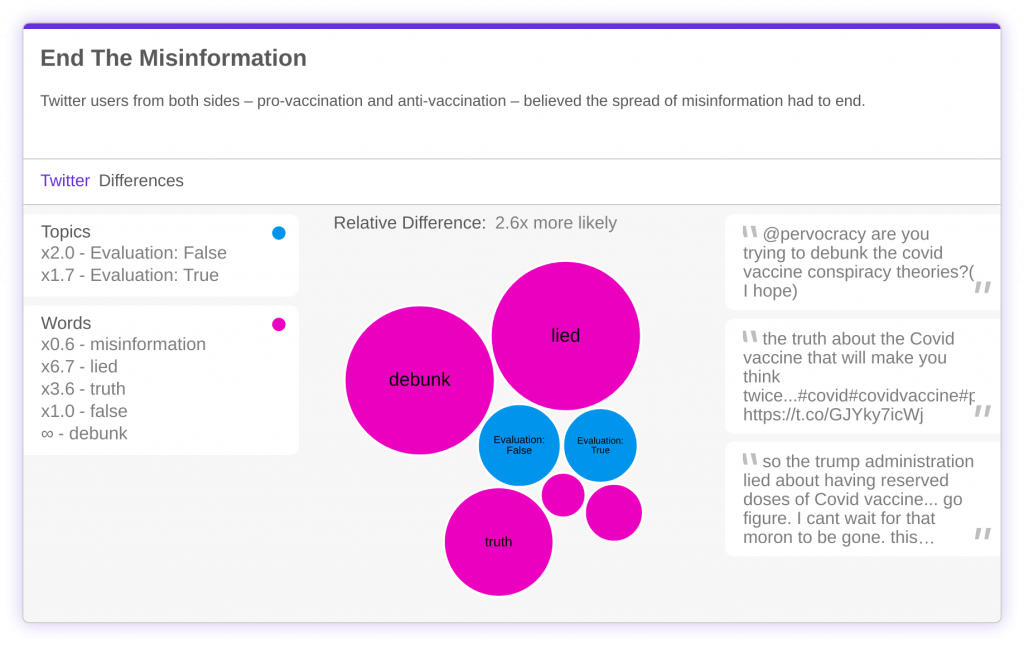 Social insights are important in understanding the views and opinions of a large group of individuals. To improve public opinion of vaccines, these insights shows us where Americans may be misinformed. In order for the vaccine to be effective, as many people as possible need to get it. Addressing these concerns through public service announcements and other forms of communication can help increase vaccination rates.

The battle of the Christmas singers: Mariah Carey vs Michael Bublé