Comparing the language that charities use on social media

You ran 5km, donated £5 and nominated 5 people to take part in the Run For Heroes challenge. Perhaps you took part in Sober October. Or maybe you’re currently competing with your friends to grow the most impressive moustache. Whatever the event, fundraising for charity is at the heart of it. And they’re often a subject close to our hearts.

However, the coronavirus crisis is projected to trigger a £6.4bn loss of income for the sector by December 2020. With so many people counting on charities to support them, the show must simply go on. But what exactly inspires action and donation? We wanted to investigate specific language used by charities designed to influence government policy and incentivises the general public to donate.

To find out the core differences in how various charities conduct outreach, we compared the language used on Twitter by Cancer Research UK, GOSH Charity, British Heart Foundation, British Red Cross and NSPCC. Using Relative Insight’s text analysis platform, we discovered the unique challenges faced by each charity, and how they look to inspire action.

Finding a cure to cancer is one of the most supported movements in modern-day medicine. And Cancer Research UK are pioneers in finding new and effective treatment for the disease. Interestingly, they are 19.1x more likely to share ‘clinical trial’ results on Twitter than comparative organisations, appealing to the general public by highlighting that donations fund ‘life-saving research’. 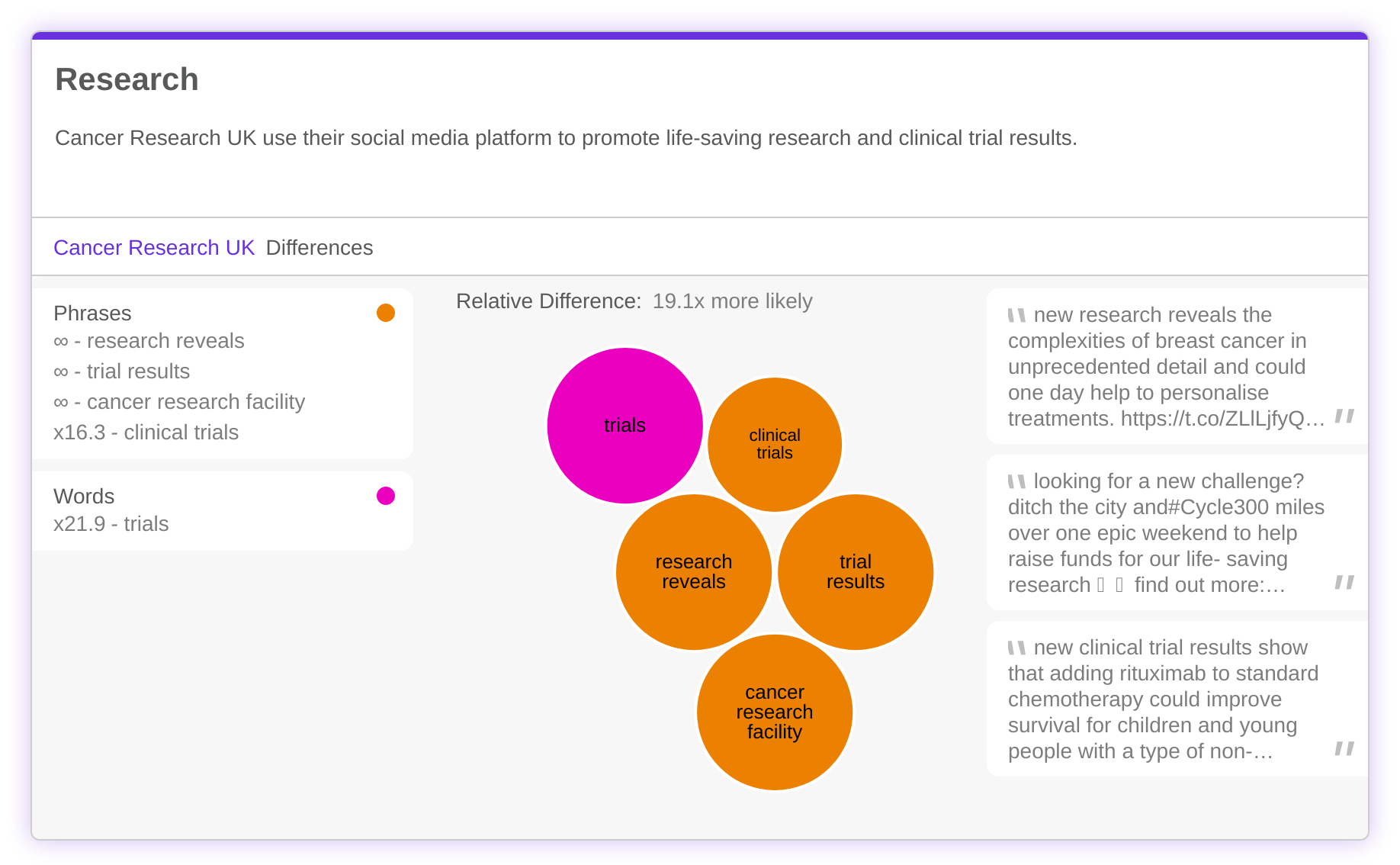 Cancer Research UK is also 15.9x more likely to use scientific language on their social media. Science defines CRUK’s mission. Therefore as a medical research charity, they aren’t afraid to use technical language on Twitter. CRUK are also more likely to depict the pioneering ‘scientists’ working hard behind the scenes. 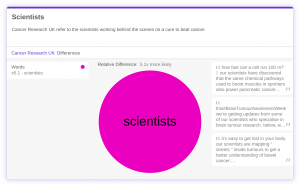 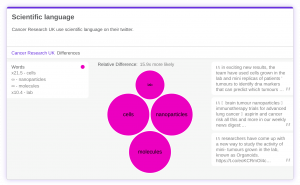 Specifically created to help seriously ill children, Great Ormond Street Hospital Charity face the greatest kind of challenge every day: young children not being guaranteed a life. However, their outreach is focused on positivity, around the idea that ‘being sick doesn’t always mean being sad’. GOSH charity is more likely to mention ‘fun’ and ‘play’ on their Twitter compared to other organisations, showing that charitable donation can bring joy to sick children. 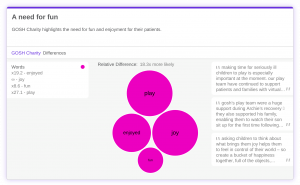 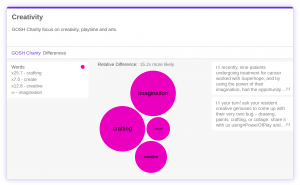 Donating to charities will always have an impact, no matter how big or small. However, GOSH are 15.3x more likely than other charities to use Twitter t0 directly address the ‘enormous difference’ that events, donations and fundraising can make to their beneficiaries. 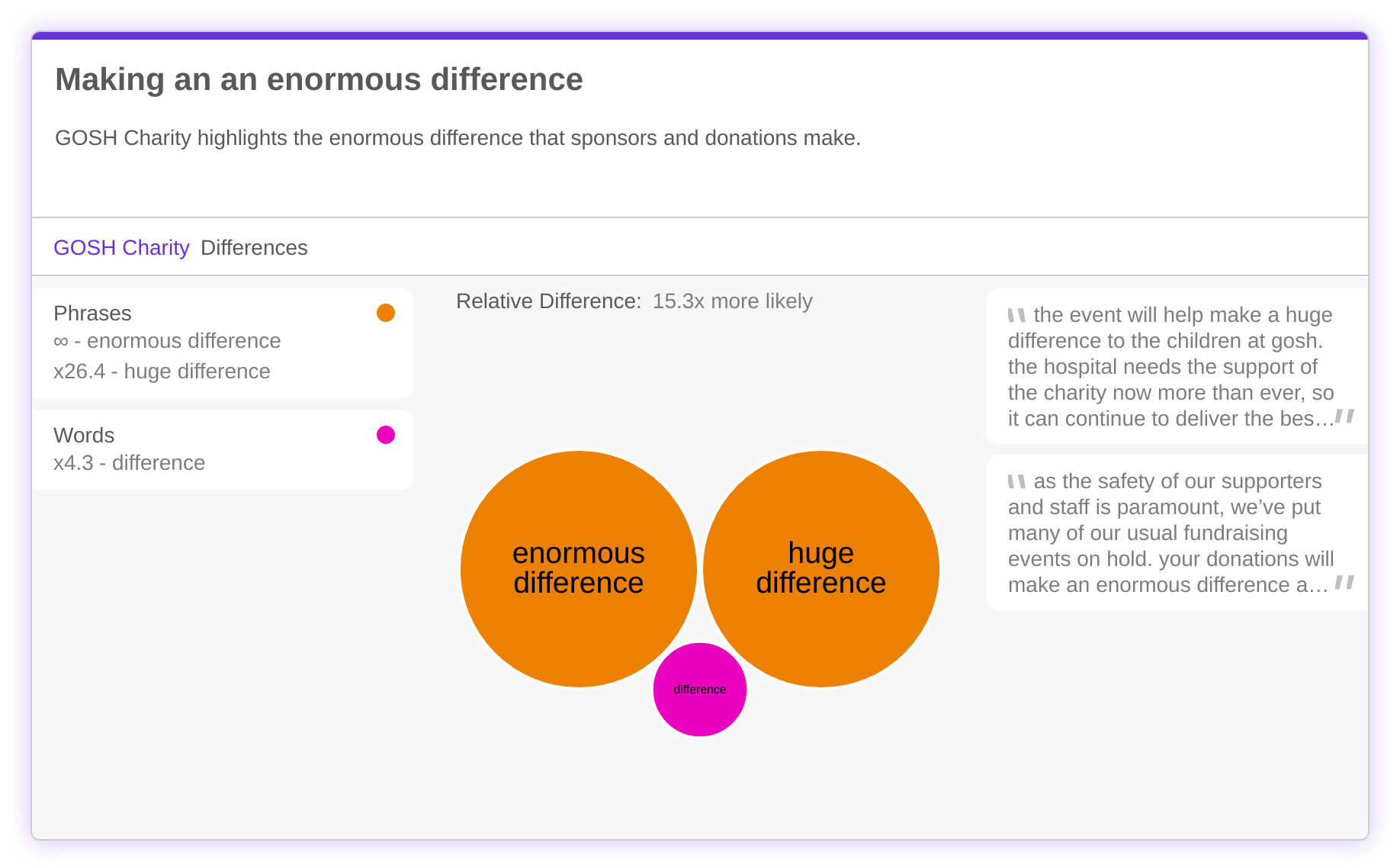 Stories emote an audience, whether their sole purpose is to push consumers further down the purchase funnel or in this case, to help encourage donations. Anecdotes attach the charity to real people. British Heart Foundation tap into this sentiment, tweeting anecdotes of ‘heart heroes’ and stories of fundraising in ‘memory’ of loved ones. 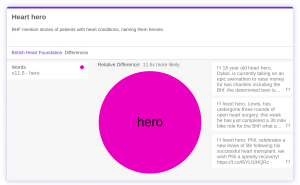 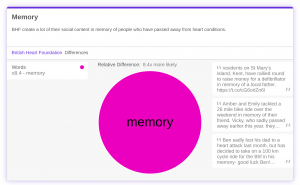 BHF’s main efforts are focused on ‘beating heartbreak forever’. However, the charity also research risk factors and prevention of heart conditions. BHF are 10.9x more likely to promote a healthy lifestyle on Twitter in regards to weight and diet. They use Twitter to inspire action. Another example is asking followers to email their MP about ‘air pollution’, an invisible killer in the UK. 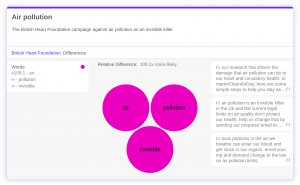 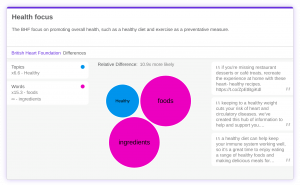 The British Red Cross is a humanitarian charity, helping people across the globe in crisis. Their Twitter channel captures the ethos of the charity in one simple word: ‘kindness’. As a volunteer led movement, the appeal for kindness is simple but effective. Anyone can show kindness, anyone can volunteer, anyone can donate. Referring to ‘volunteers’ 10.5x more than comparative organisations, The British Red Cross use Twitter to encourage more people to sign up and help out. 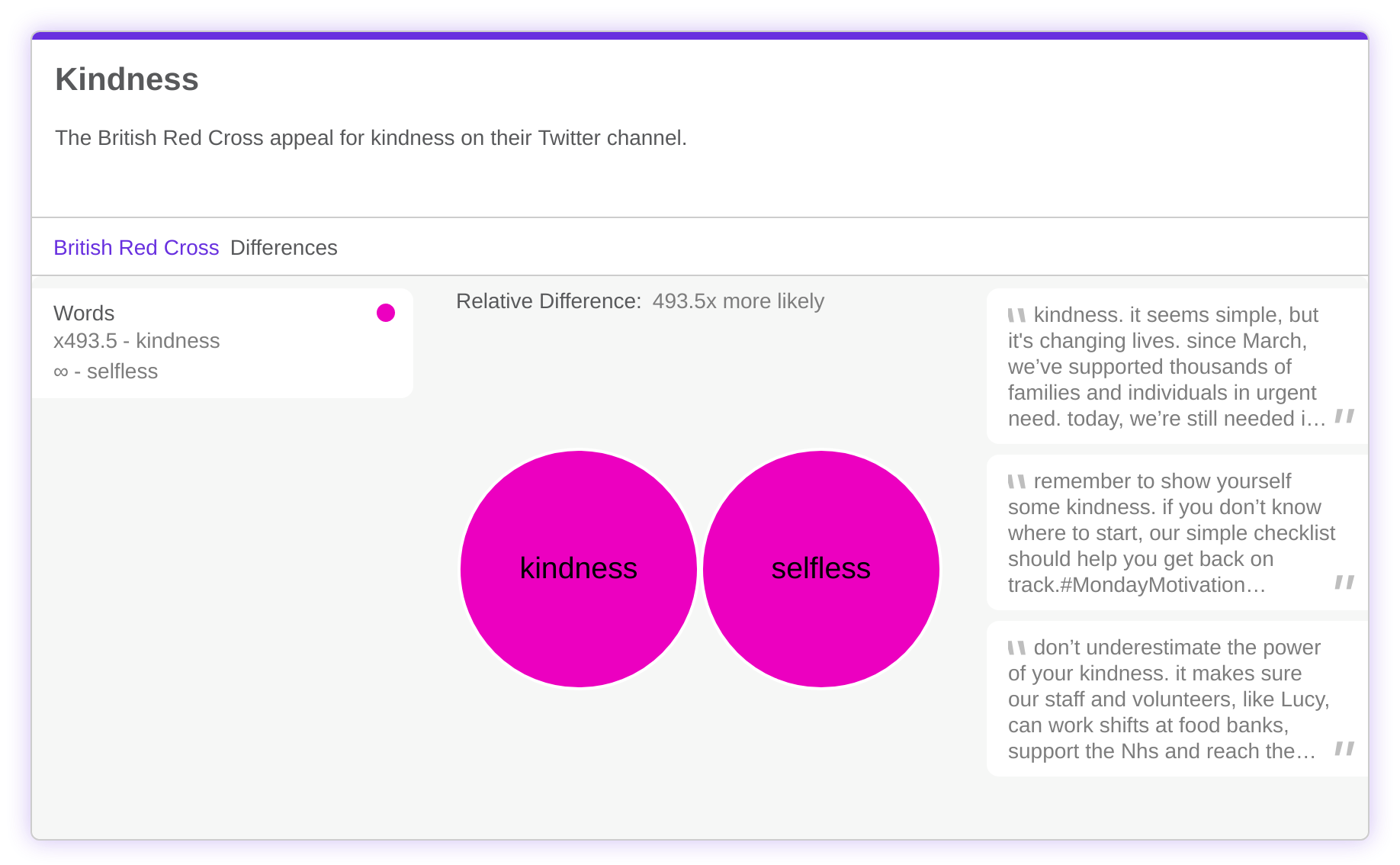 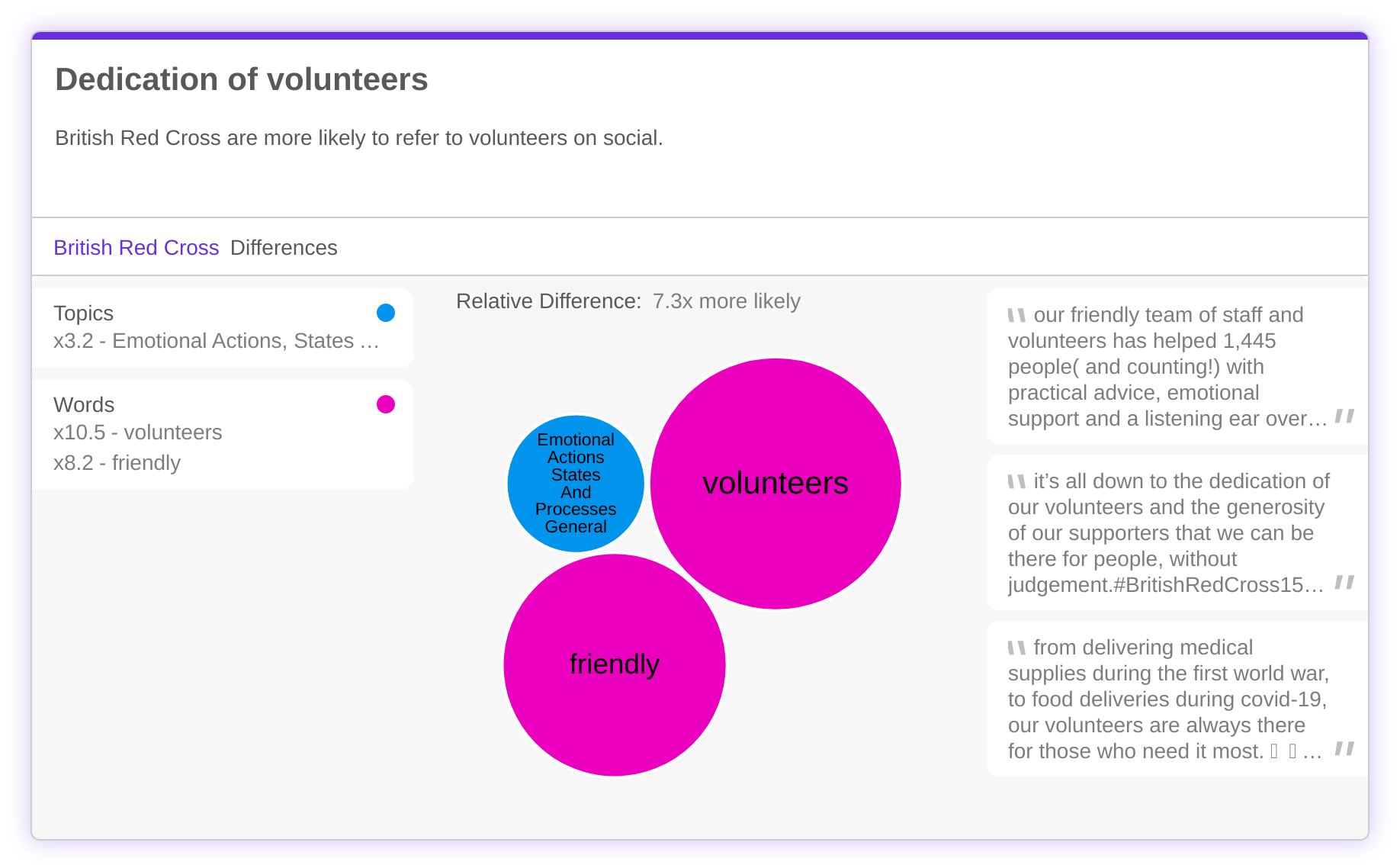 As a longstanding charity, BRC draw on their history throughout their Twitter. The word ‘always’ is 4.2x more likely to be used. The British Red Cross have ‘always been there’ in times of crisis, and are ‘always’ ready to respond. 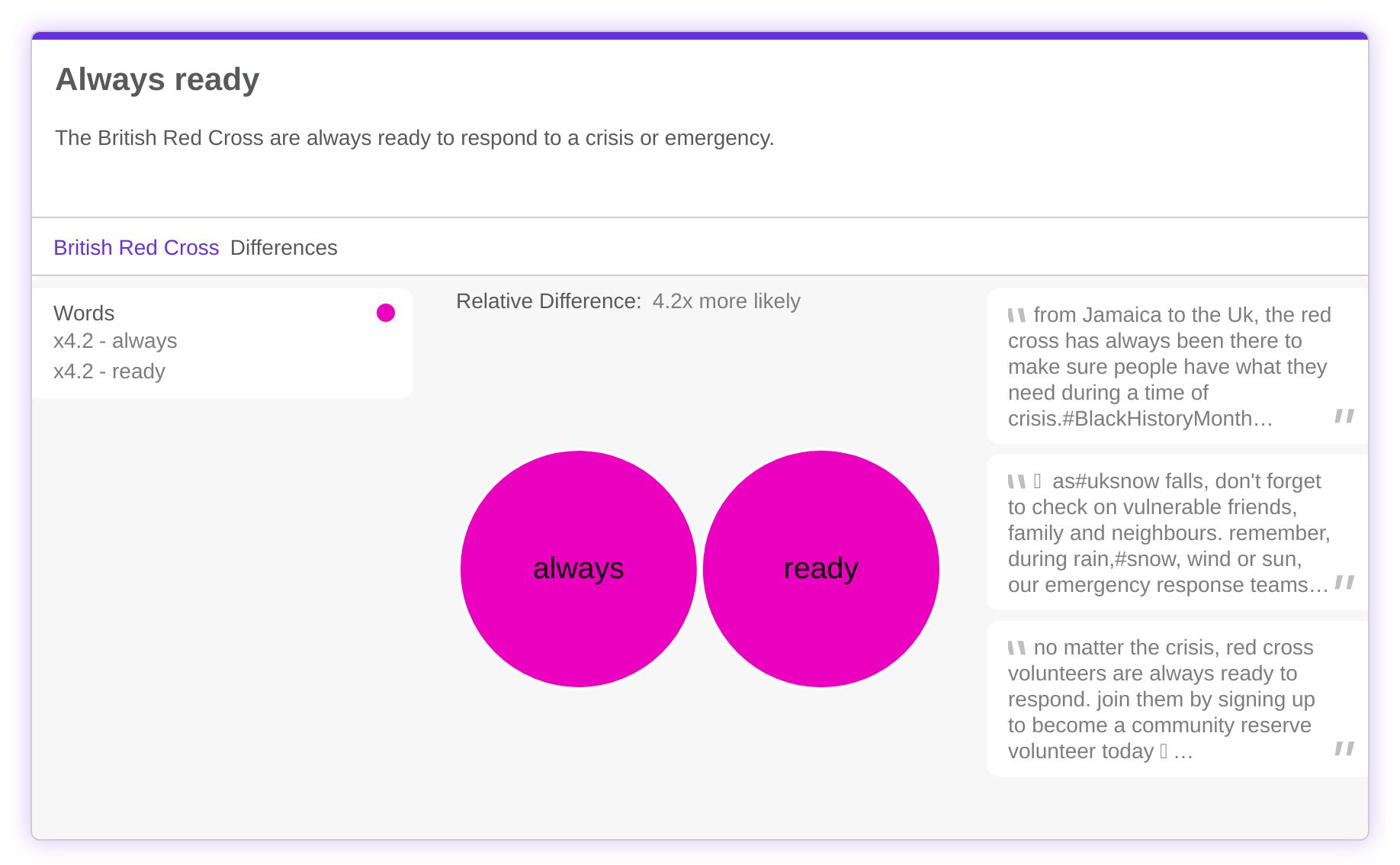 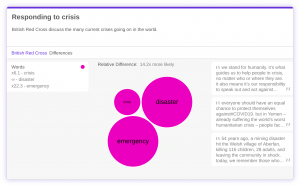 The NSPCC have a huge task of keeping children safe and preventing child abuse. Childline provides young people with a lifeline, offering help and support every 25 seconds to children. On Twitter, the NSPCC are 3.1x more likely to use the word ‘help’ than comparative organisations. Although all charities aim is to help people, it’s interesting as speak about both the help they offer and directly address the help they need from benefactors. 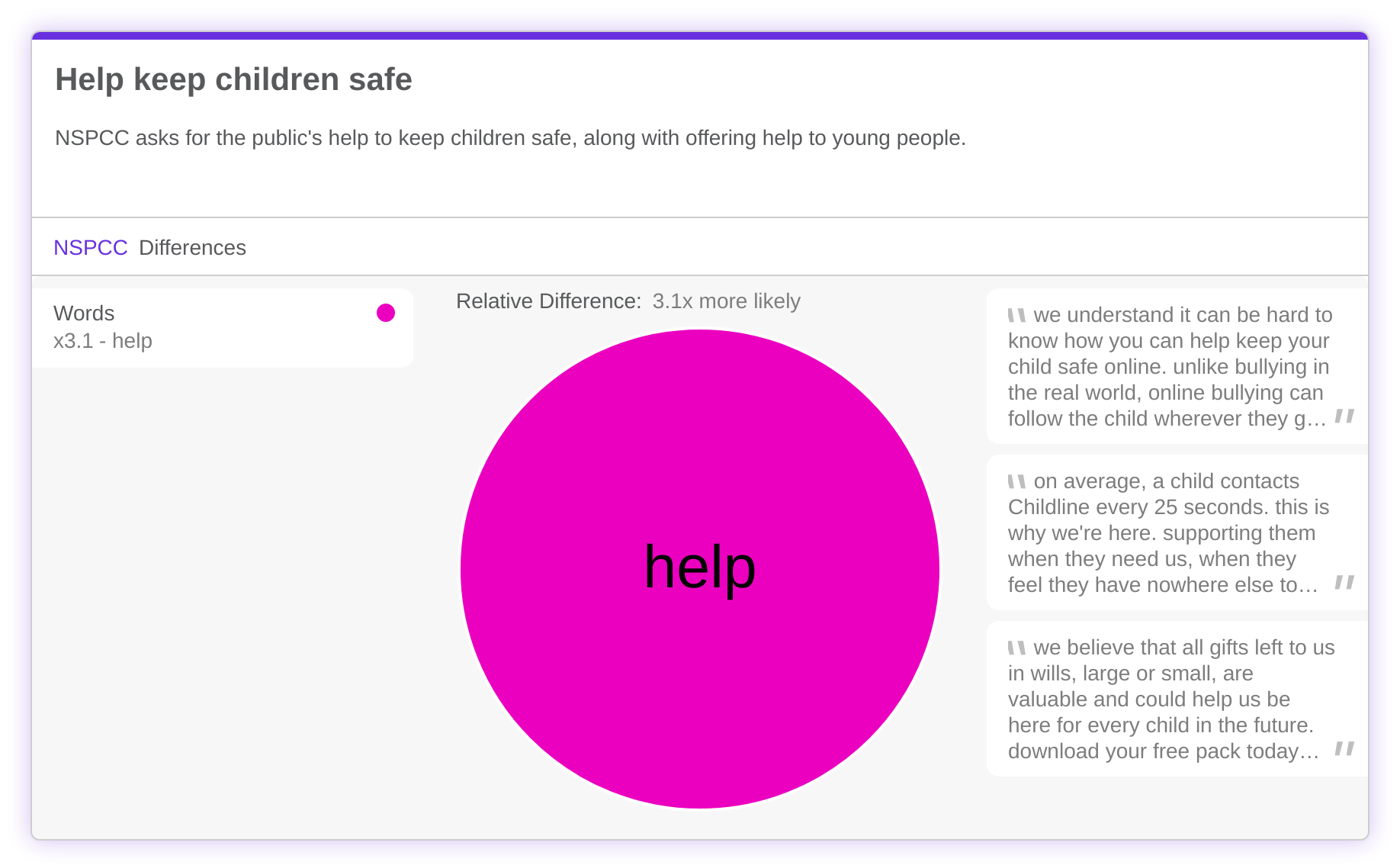 Twitter is often used as a means of putting out emotive content, recent updates and news. However, the NSPCC use the platform to respond to people’s concerns, ‘understanding’ various difficulties they might be facing. By using understanding language and acknowledging that it takes ‘courage’ to ask for help, NSPCC break down barriers with people who might be in need of the charity’s help, but are anxious to reach out. 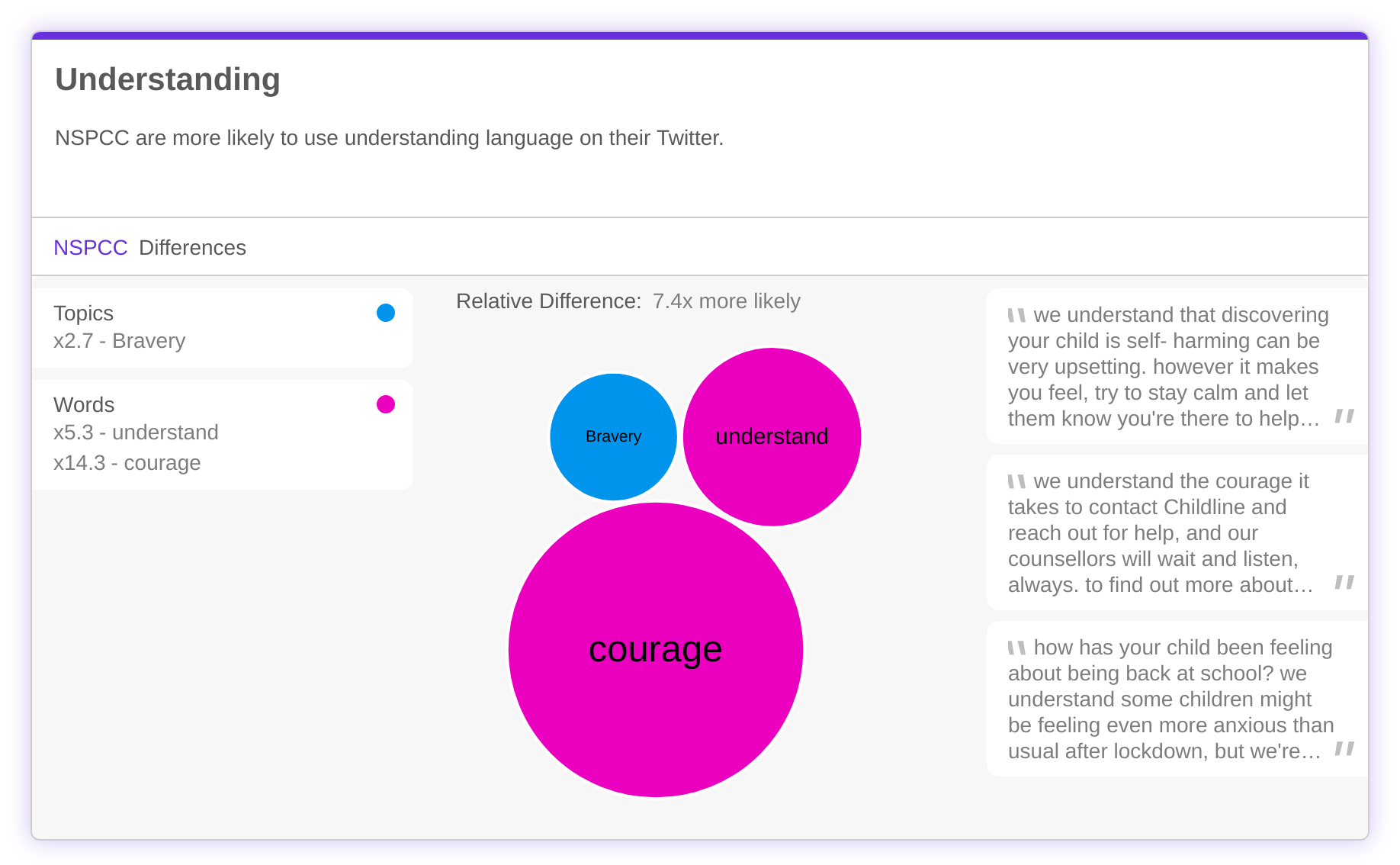 Although charities do not position themselves as competitors, this is a clear example of how Relative Insight’s text analysis software can be used for social media analysis to compare language for competitor benchmarking. By analysing data from social listening tools, we discovered unknown insights in how different charities communicate, highlighting the white space in the sector and providing comparative organisations with the opportunity to diversify their social content.

Today, the software is used by organisations – including charities – to analyse any source of language data – helping them identify new, effective ways to engage with beneficiaries, service users, policy-makers and the general public.

See how it works