Comparing online marketplaces through the language of seller forums

We all have that box of old – strike that – vintage clothes, or a crafty hobby we claim we’ll profit from one day. But which online marketplace is best for your 2000’s Juicy Couture tracksuit or hand-embroidered pillow case?

To understand what sets each online marketplace apart, we compared the language of seller forum conversations for Etsy, Depop, Mercari and Poshmark. The differences in words, phrases and topics used can give us audience insights into the unique challenges and benefits of each platform.

Depop: All the cool kids are using it

Depop lived up to its reputation as an app targeting Millennial and Gen Z users. Sellers were more likely to use the word ‘like’ in forum conversations, often as an interjection or a comparison tool. The word ‘like’ has evolved in recent years, and is associated – often negatively – with young people. 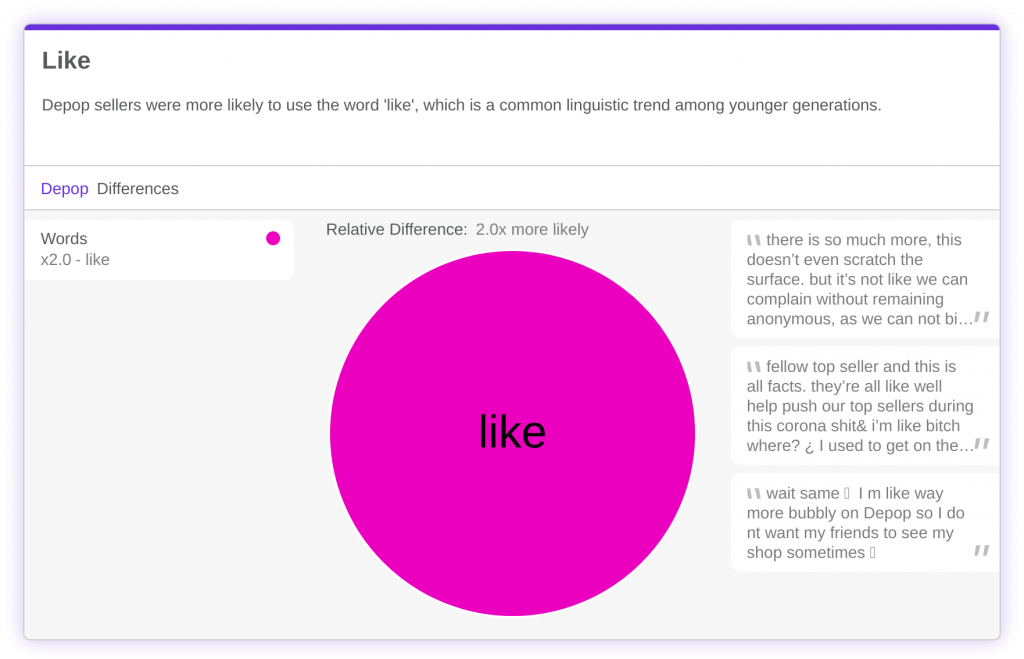 Another indicator that these sellers weren’t born before 1990 is the use of text slang, including ‘omg’ and ‘lol’. Depop can communicate more effectively with buyers and sellers by using language catered to younger audiences. 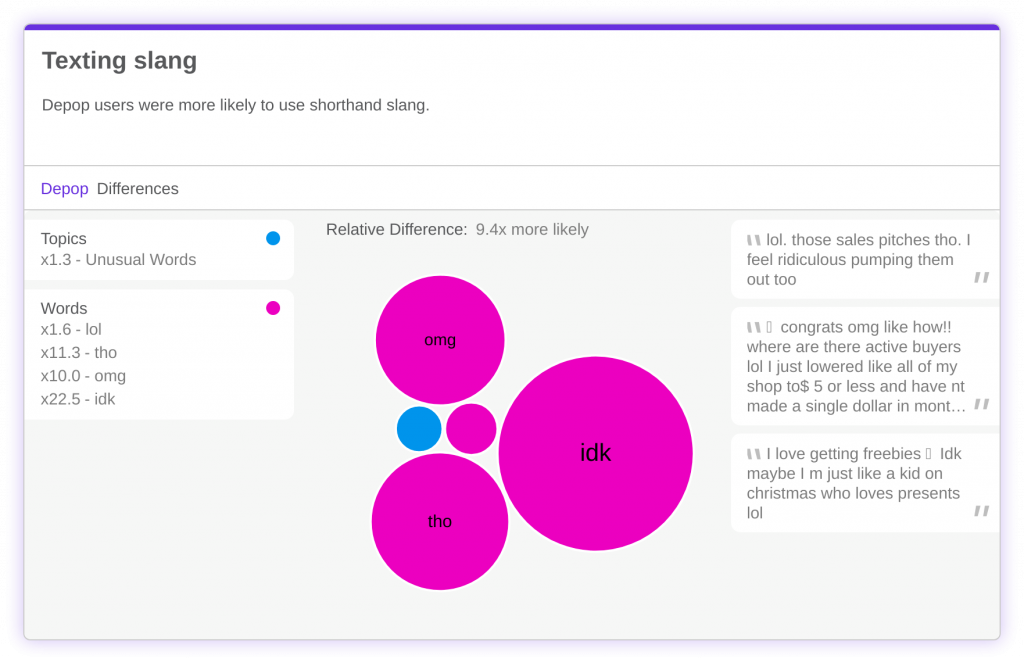 Language used by Depop sellers also indicated that popularity in the app is declining. Sellers were likely to use words such as ‘tired’ and ‘lazy’ to describe their own lack of motivation and a similar laziness seen from others. This disenchantment with Depop could be partially caused by declining sales. Sellers were likely to discuss poor sales as a result of COVID combined with a typically slow time of year. 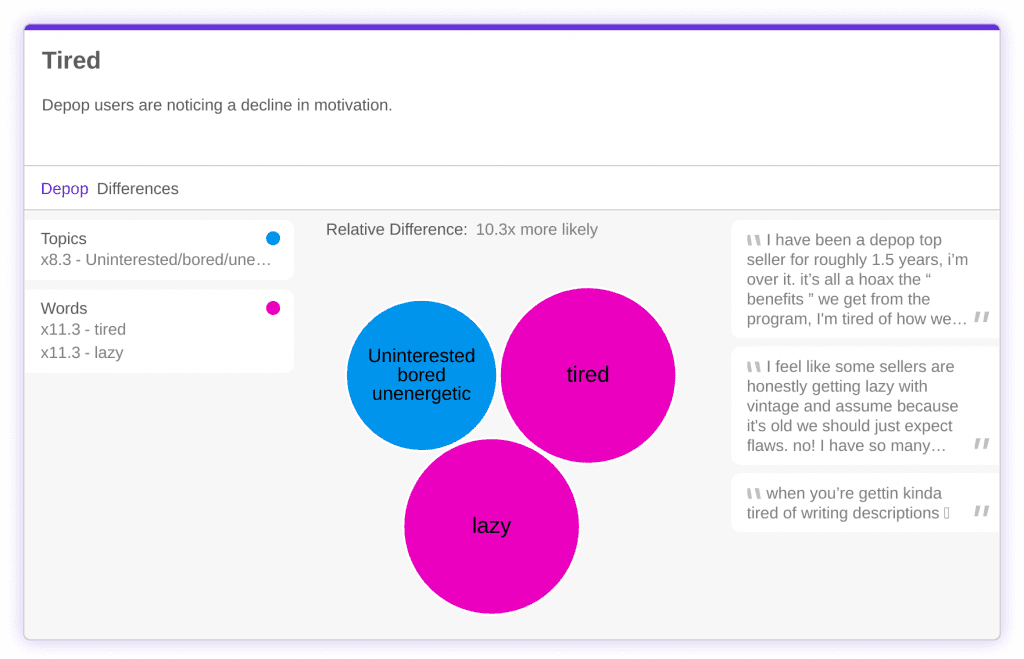 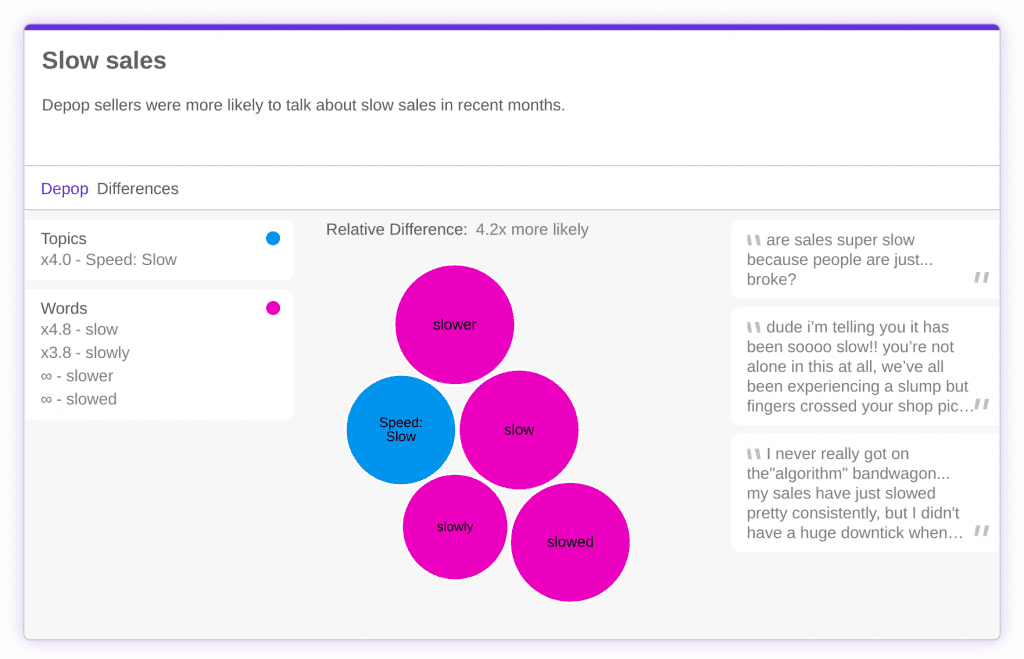 Among Mercari sellers, scammers were a serious issue. Forum users were likely to ask for advice on how to avoid being swindled by sellers and buyers alike. Buyers were concerned about receiving fake or not as described items. While, sellers saw some buyers running shipping scams or claiming to not receive items in order to get a refund.

This fear scams lead to users feeling a little worried. They were more likely to use language indicating concern like ‘worried’ and ‘anxiety’. If this is a prevalent issue, the platform could benefit from a more comprehensive vetting process or communicate with users how to recognize a scam. 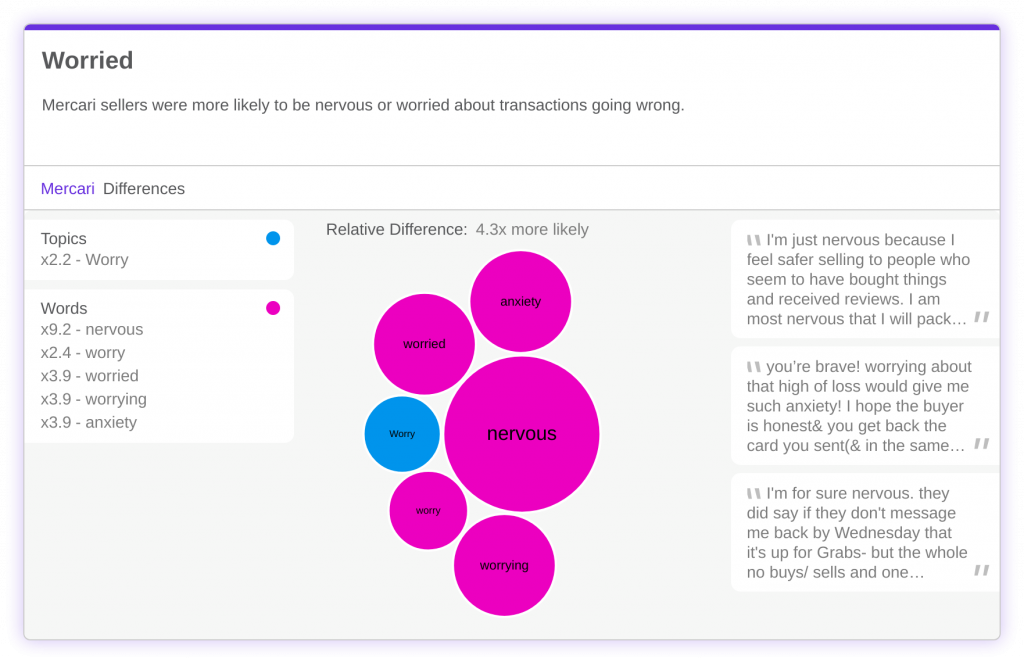 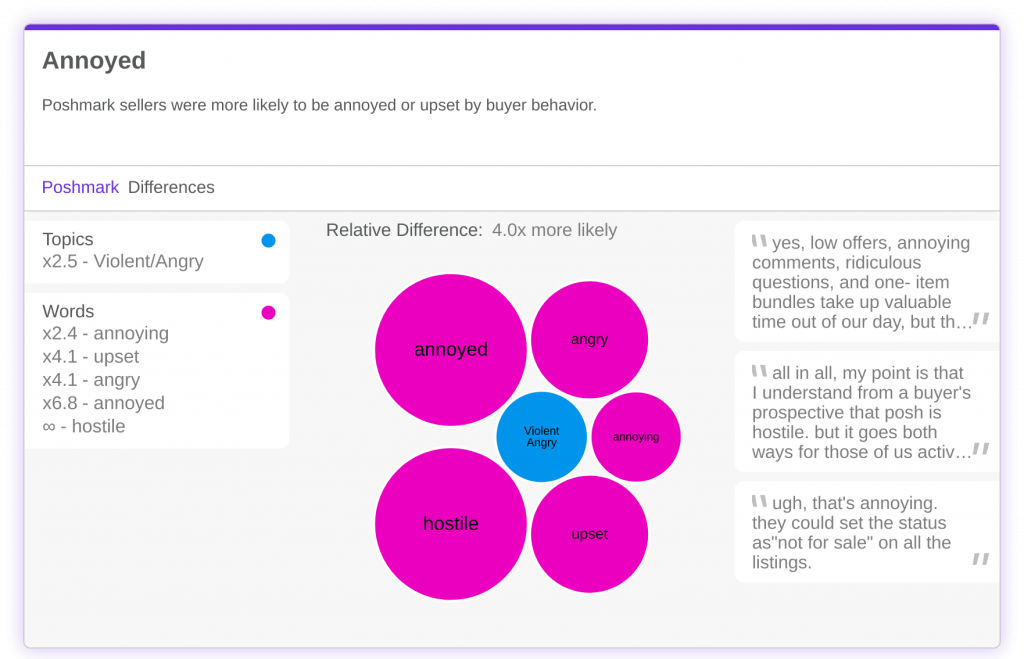 Rude or redundant questions were a complaint seen again and again. On Poshmark, there is no direct messaging feature to negotiate or ask questions. All conversation prior to purchasing goes down in the comments section. Some sellers disliked the lack of privacy, as it could lead to a loss of leverage during future negotiations.

The bulk of complaints were targeted at rude or annoying comments – ie. users spamming others to check out their shop and snarky comments enlightening the seller that someone else is selling the same item for less. The introduction of a direct messaging feature could help put more power in the seller’s hands. 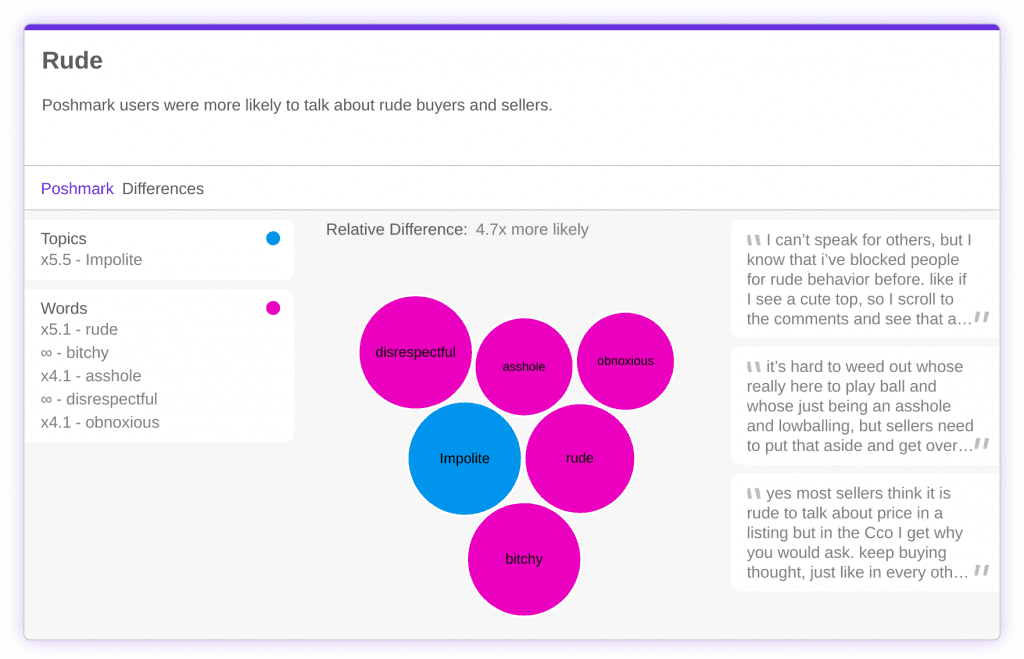 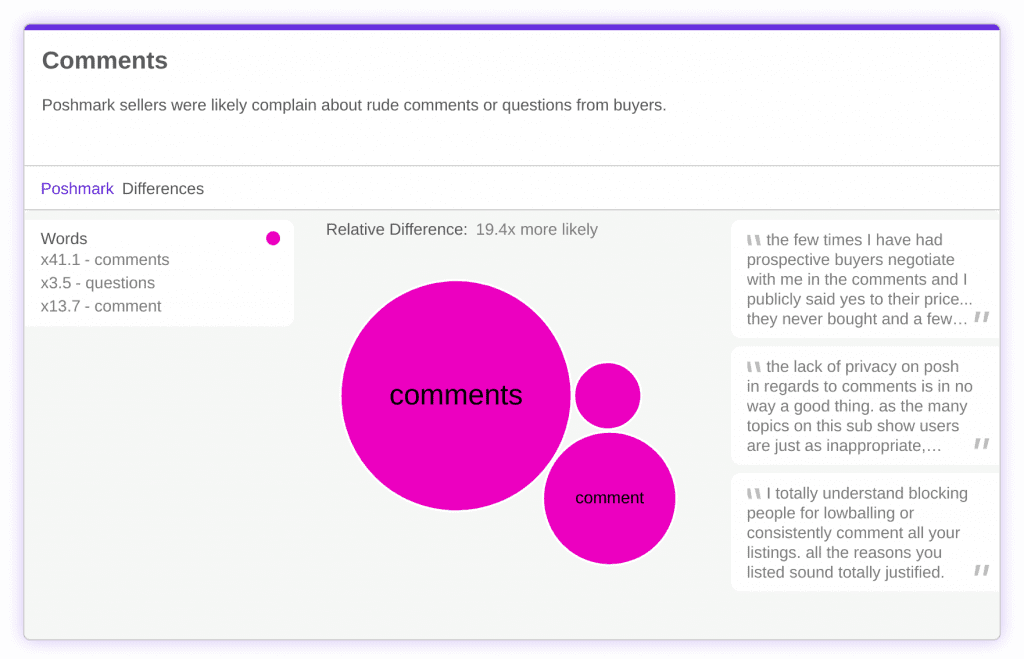 At the end of the day, there is still a lot of love for Poshmark and its community. Users were more likely to use the word ‘love’ in reference to successful purchases or positive experiences on the platform. 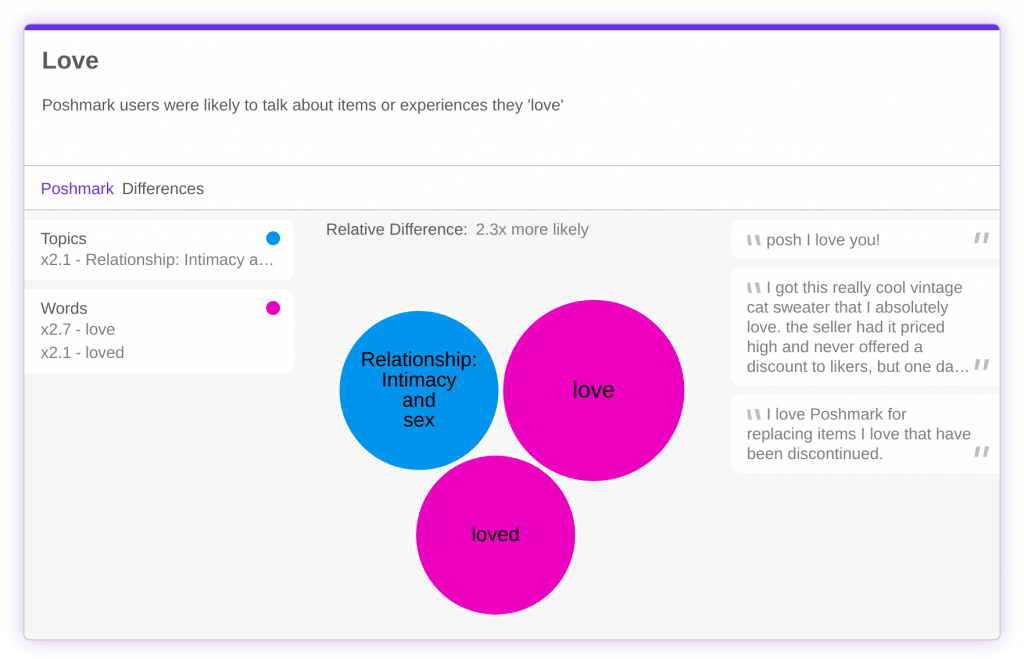 Language used by Etsy sellers made it clear they are always looking to improve and share wisdom with others. They were more likely to use the word ‘work’ in terms of finding what ‘works’ for their shop. Sellers were motivated to improve listing photos, product quality and customer service. 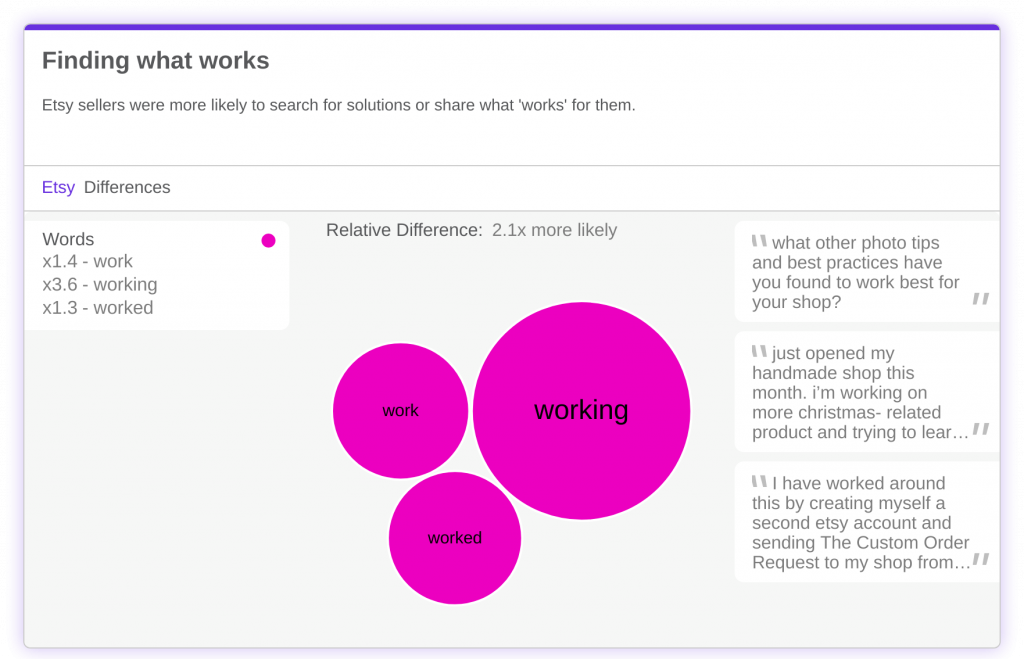 This motivation to improve is likely to come from a desire to please customers and receive good reviews. Etsy sellers were more likely to use the word ‘review’ and ‘customer’ in forum discussions. Some asked whether it was appropriate to solicit reviews and others discussed unfair low ratings. 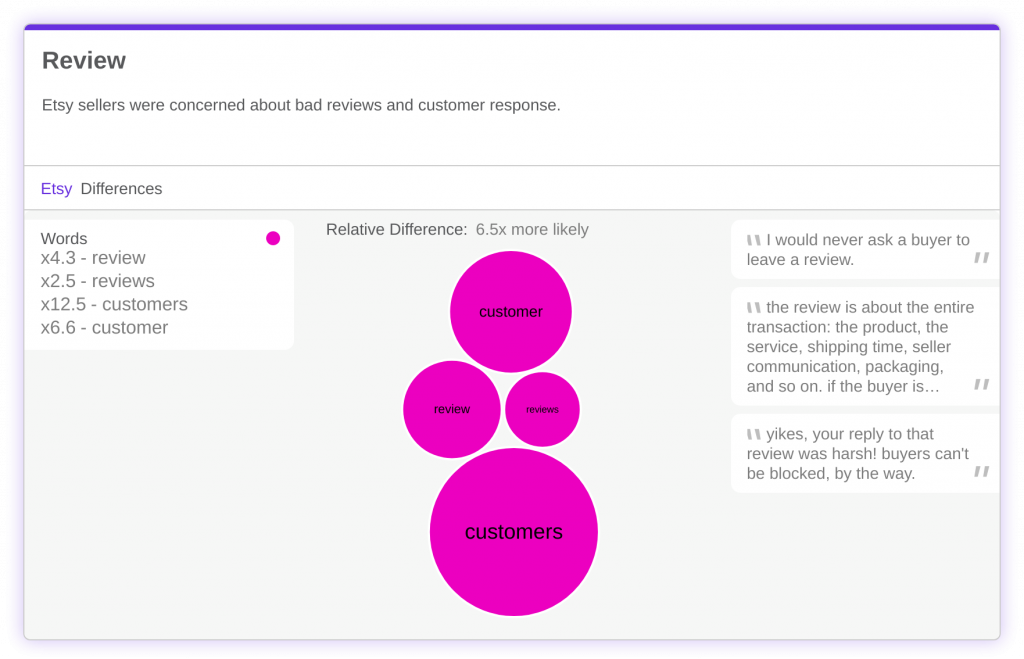 It’s safe to say Etsy sellers are feeling some good ol’ Christmas spirit. As a platform for handmade goods in addition to vintage, many sellers see an influx in sales leading up to the holiday season and must prepare accordingly. The significance of the words ‘holiday’ and ‘Christmas’ leads us to believe Etsy has cornered the holiday market. 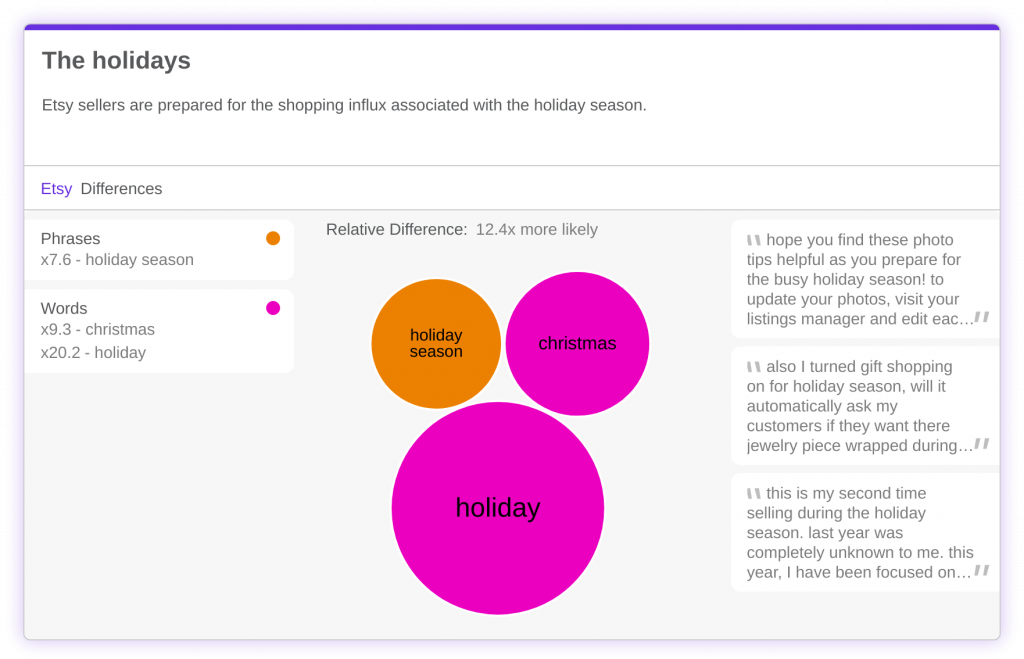 Relative Insight makes sense of your qualitative data. From social media to web copy to survey results, contact us using the form below to learn more.