Has coronavirus given us a reason to stop berating ourselves?

This year, life is completely different. Concerns about coronavirus have meant that people’s lives have changed, routines have changed and priorities have changed – so I was keen to get some social insights about how people have been talking about their resolutions. Will 2021 mean a completely clean slate, giving people the opportunity to live their best lives amidst the chaos by making a list of all the things they wish to achieve – or do people have too many worries to even contemplate making resolutions?

I decided to look into it, so I compared at how British and American people tweeted about their resolutions on New Year’s Eve and New Year’s Day this year, and compared that language data to what was being said on those same days a year ago.

Socialising
The word socialise and sociable appeared much more often in last year’s resolutions as people declared their (now ironic) intentions to spend more time with family in 2020, that and with vows to go out and make new friends. Both words were completely absent from our resolutions this year as socialising has been restricted to Zoom parties. 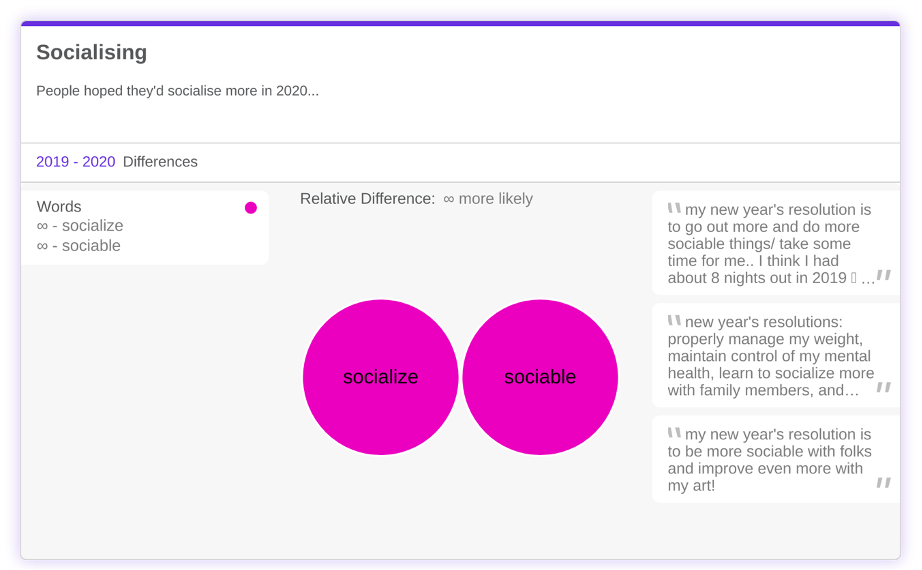 Hitting the gym
This time last year, we were more likely to talk about the gym in relation to our fitness resolutions. People talked about continuing progress with weight training, and seasoned gym goers lamented how full the gyms were on New Year’s Day. Of course, as the resilient and adaptable species that humans are, we’ve adopted new ways of exercising from our homes and gardens with gyms closed for the most part of last year, perhaps altering the way we’ll choose to move our bodies in 2021 too. 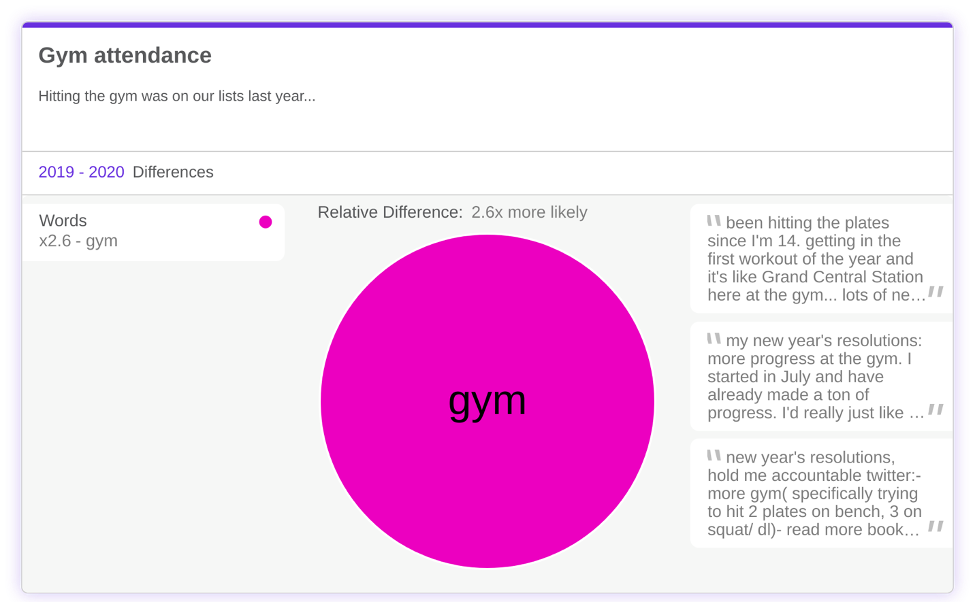 Diet goals
People were more likely to talk about food in their resolutions last year. They vowed to order less takeaways, to eat foods that were less processed and with less packaging, and opt for better over bad foods. This year, it looks like we’ve given ourselves a break from diet related goals as perhaps we’ve all got enough on our plate already. 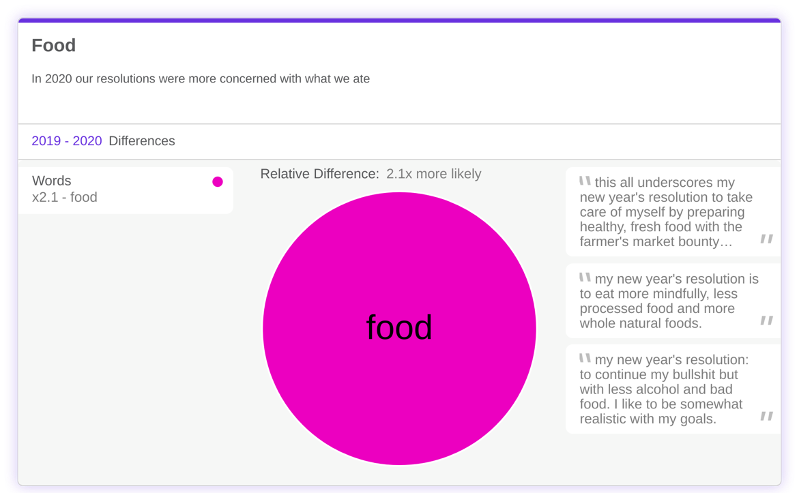 Instead, the topic of drinks and alcohol was more likely to come up in this year’s resolutions, with more people declaring they were going to drink more water in 2021. Mentions of drinking alcohol in general were mixed this year, with some people declaring that they’d drink less, whilst others proclaimed that they aimed to drink more in order to get through 2021. Fair enough. 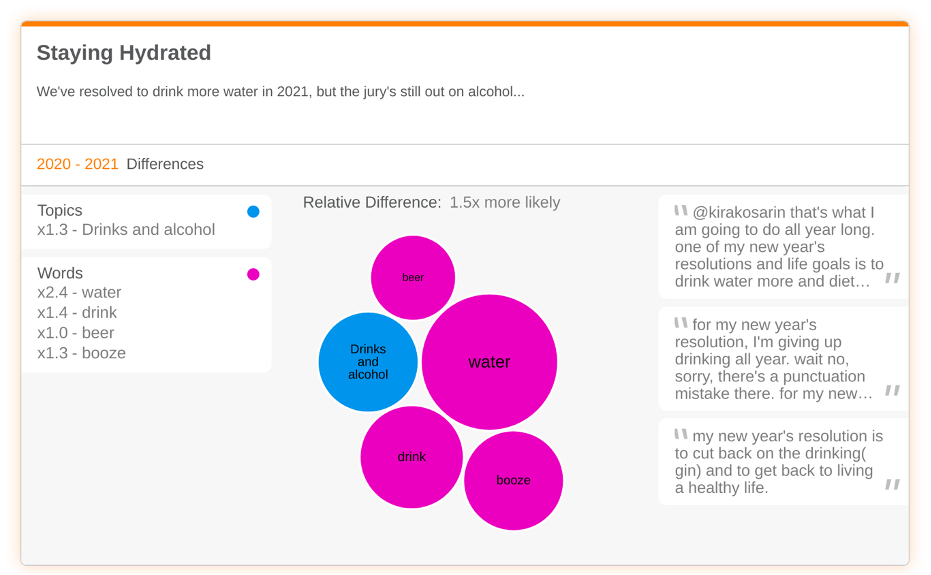 Making the world a better place
Last year, our resolutions focused on making changes to help look after the planet. The word world appeared more often, as did climate and plastic, a word which did not appear at all this year. The phrases fighting climate change and reduce plastic came up frequently as we made goals to tackle our environmental impact in 2020. 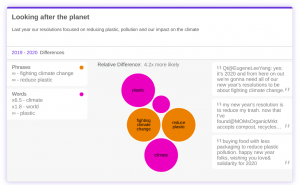 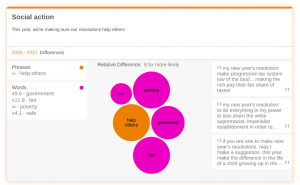 This year, our resolutions focused more on social action. People frequently vowed to help others, a phrase that was completely absent from last year’s resolutions. People expressed goals to tackle racism, inequality and poverty in 2021, and used words like fair and safe, committing themselves to helping to create a more equal society.

Taking it easy
I noticed that people seem to set themselves smaller and more doable tasks in their resolutions this year. The topic of cleaning and personal care appeared more often, and the phrase per day was over ten times more likely to be used, suggesting that people are setting their sights on more humble ways to change their lifestyles. 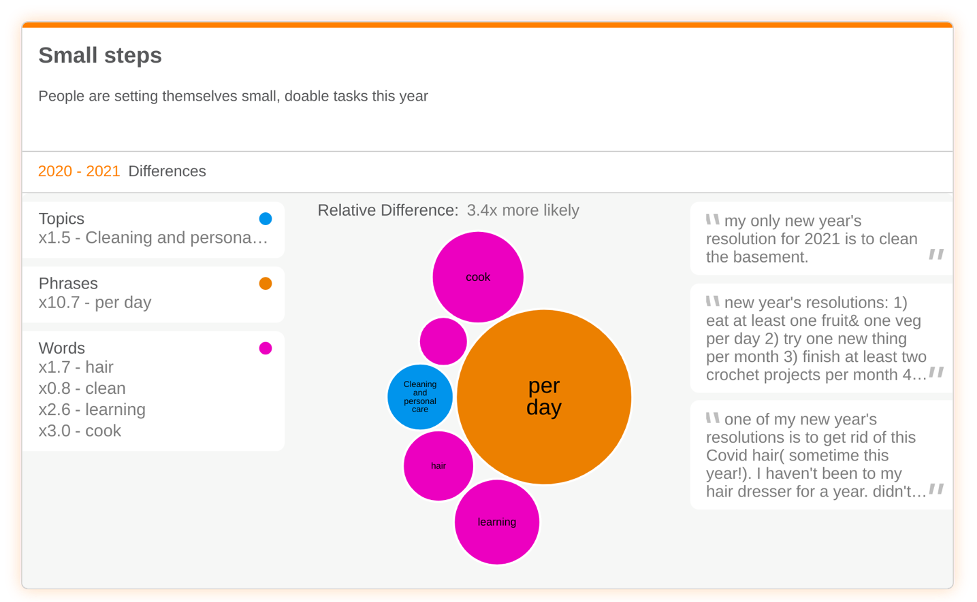 The words learning, cook and clean appeared more than last year, as achievable and even mundane goals such as cleaning makeup brushes and keeping a tidy home made an appearance, alongside learning new things and honing cooking skills. And, within the topic of personal care, the word hair appeared more frequently than last year, as people lamented their covid hair and vowed to sort out this aspect of their appearance in 2021.

In our feelings
Finally, Tweets about resolutions this year were more likely to focus on feelings and emotions than last year. People more frequently expressed their hopes for what 2021 would feel like and used relaxed and happy emojis, and words like vibes and heal, to express themselves. 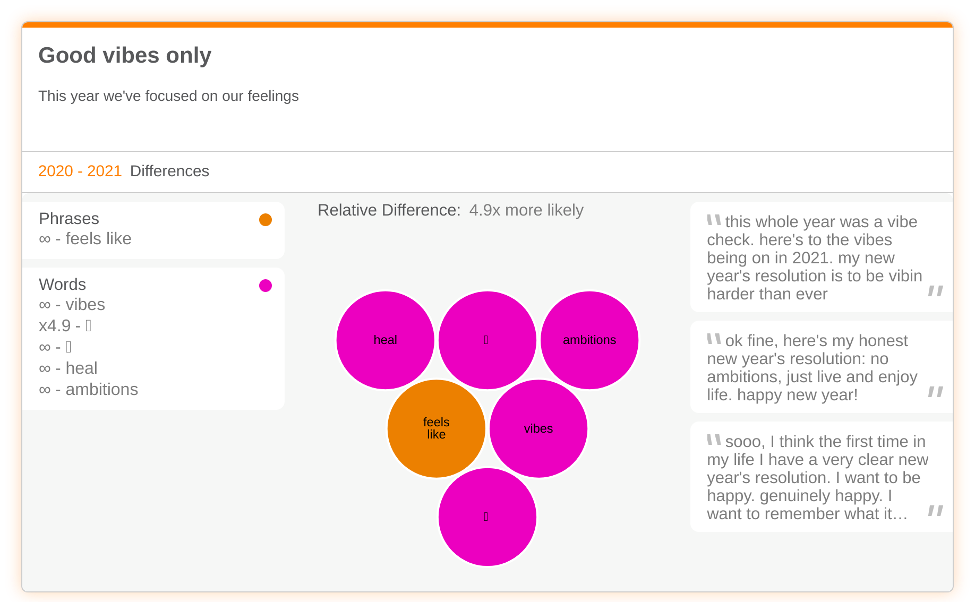 The word ambition was also more likely to appear in this year’s resolutions, but was used to declare a decided lack of it, with people instead resolving to go easy on themselves and enjoy life – one resolution we can certainly all get behind in 2021.

Get in touch to learn how Relative Insight can help you get the most from your data.

See how our platform can help you

Exploring Halloween insights for UK and US audiences

Are Americans and Brits ready for music festivals again?