Carbon neutrality, often called net zero, refers to the practice of achieving net-zero carbon dioxide emissions. This can be accomplished either through removing as much carbon as you emit or eliminating the emissions in the first place.

Some background: The US and UK both look to achieve net zero emissions by 2050. Nearly 30 years sounds like a long time, but the work to reach carbon neutrality starts now. According to an International Energy Agency report – Investment in clean energy will need to triple to $4 trillion by 2030, and coal and oil power plants will need to be eliminated by 2040 – and those are only some of the necessary benchmarks.

The immense amount of effort and funding carbon neutrality has led to a mixed response from the public. What course of action is best? Do the benefits outweigh the disadvantages? These are the type of questions people are contemplating online.

Brands use Relative Insight to track topic and brand conversation over time to understand the evolution of opinion. As net zero efforts progress, we sought to understand the evolution of conversation over the past two years. First, we uploaded forum posts mentioning net zero or carbon neutrality to Relative Insight and compared conversations from 2020 and 2021. This form of analysis will uncover the differences in word, phrases, grammar, topic and emotion between the two years. This is what we found:

In 2020, forum conversation was generally informational. Users discussed the scientific aspects of achieving carbon neutrality, which we observed through the use of words and phrases relating to energy production and sources. 2020 conversations were much more likely to use phrases like energy density, energy requirement and energy source. 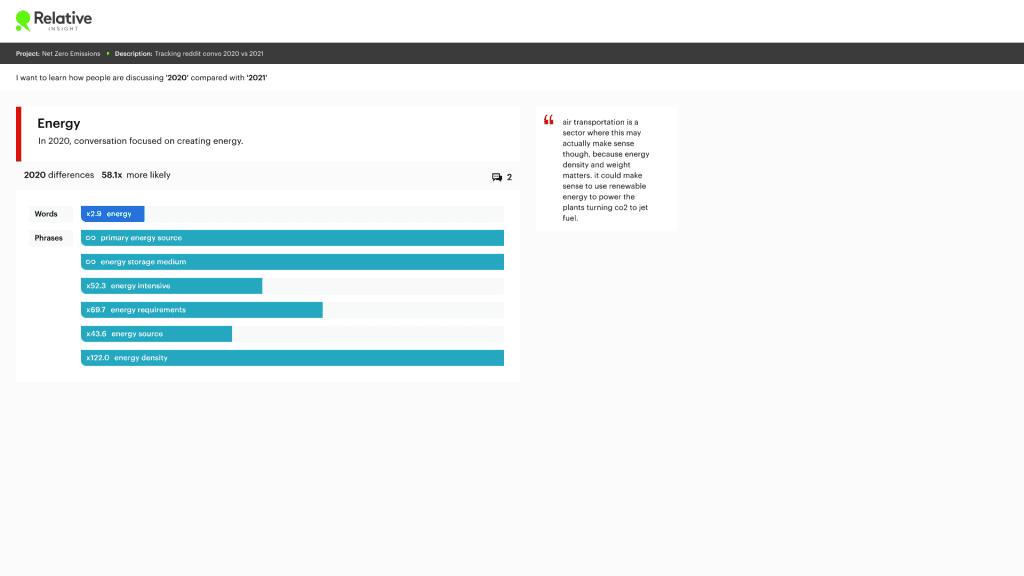 Air travel was another popular topic of conversation in 2020. Forum users discussed potential green energy solutions for air travel, specifically the use of biofuel to power jets. We found significant use of the words jet, Boeing, aircraft and airplane. 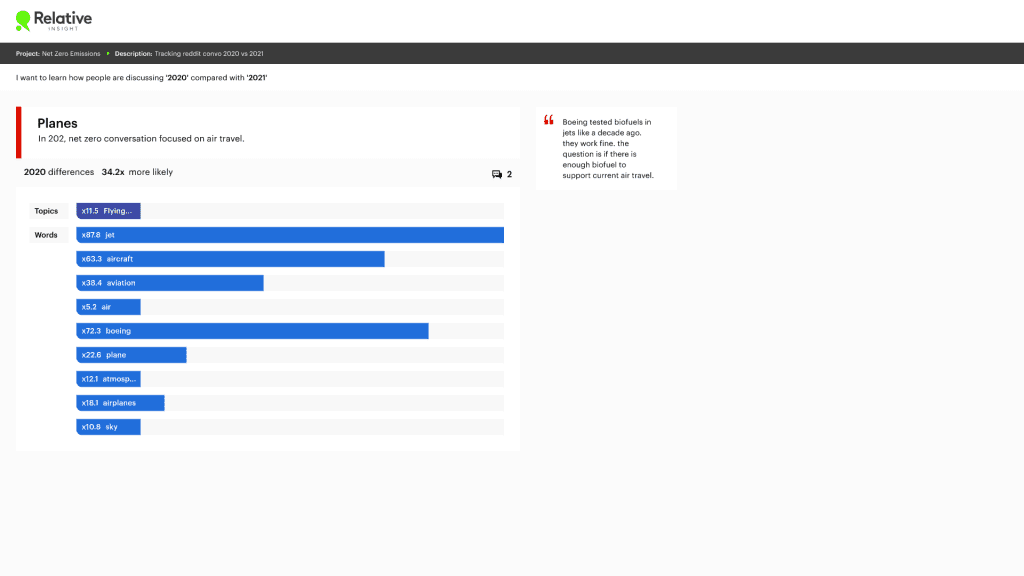 Discourse around net zero spanned different industries and applications including farming and the weather. Our analysis found increased use of the words wind, humidity and snow in relation to weather – and crops, harvested and irrigation in reference to farming. This shows an all-encompassing interest and concern in carbon neutrality. Forum users were not focused on one specific issue.

Conversation in 2021 became much more opinionated compared to 2020. Forum users were less likely to discuss potential solutions and objective information. Instead these conversations were almost exclusively personal opinions which incorporated words like bullshit, hate, corrupt and bad. 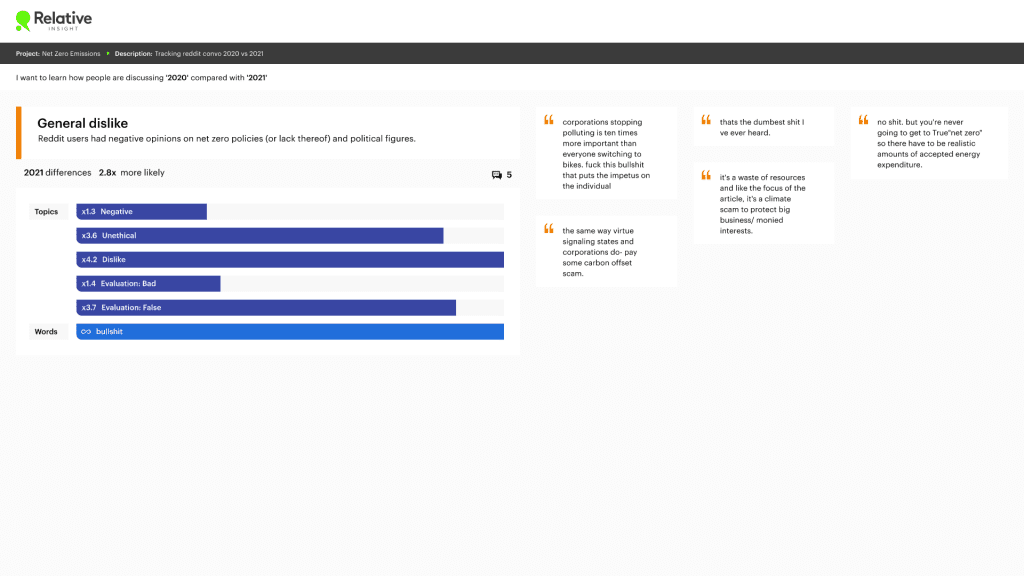 These negative opinions targeted government agencies and corporations. Net zero efforts (or lack thereof) that did not align with user preferences were the subject of insulting commentary. We observed this through the use of words like government, laws and party. 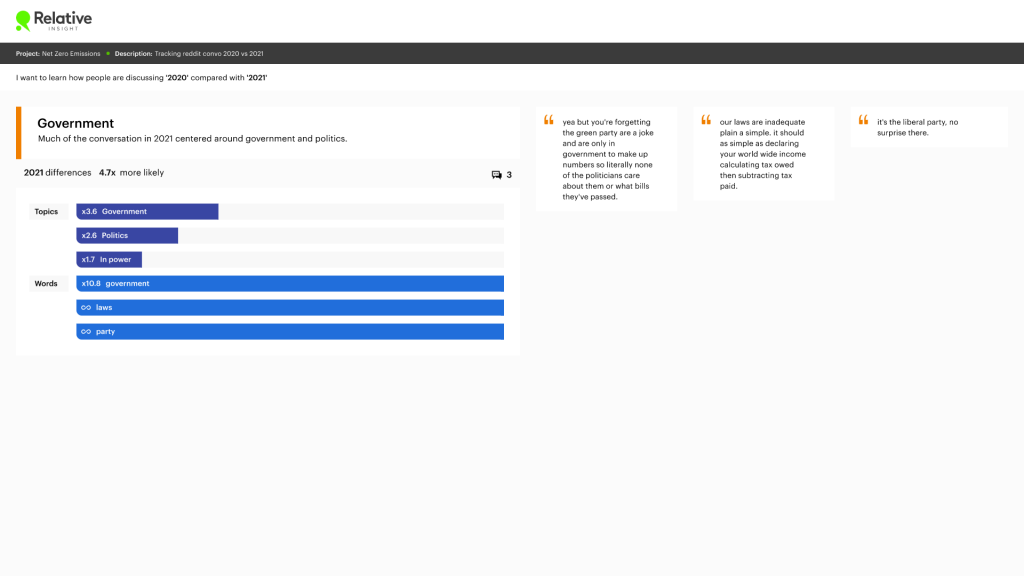 We all know corruption boils down to one thing: money. Forum users were likely to blame the influence of money in politics for the inadequate actions of public figures. Forum conversations included words like tax, money, pay and economic. Many money related conversations suggested the idea of a carbon tax or gas tax.

Carbon neutrality has become a hot topic over the last year. Forum users are disgruntled by lack of action from government agencies and influence by industry lobbyists. Governments and corporations must prove that impactful steps are being taken to achieve carbon neutrality by 2050.