I’m panicked and stressed, but I want to buy some more stuff… 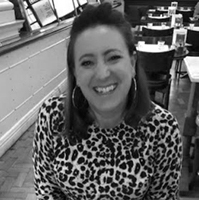 The adjective “black”, when applied to a mood, a circumstance or event generally has negative, emotive connotations relating to calamity, stress, fear and desperation. Yet for Americans – and latterly for us Brits, Black Friday is a celebration of consumerism.

Traditionally in the US, Black Friday was always one day (not a week as it’s grown to be), intrinsically linked to Thanksgiving. It’s the first day after the last major public holiday before Christmas and marks the unofficial beginning of the Christmas shopping season.

Historically, the busiest day in the year for retailers, and ‘black’ because traditionally the first point in the year when they turn a profit, thus going from being “in the red” to being “in the black”. So nothing dark here, and essentially a day to look forward to, a day to buy some presents, a day where you can get a couple of bargains, a day that marks the end of one holiday and looks toward another.

But it’s not really like that over here is it? Despite the fact that Thanksgiving is the most star-spangled and historic of US holidays, global mass consumerism means it’s landed very squarely in the hearts, minds and wallets of the British.

What do consumers really think about Black Friday?
We looked on Twitter to run some social insights comparison analysis to find out how people in the US are talking about their Black Friday compared to those in the UK, and the language used is wildly different. Not simply because of the type of favourite shops they have over there…

Americans are infinitely more likely to use words like “super excited” than the British, which is interesting because despite the fact that these hyped-up adjectives have gradually made their way into the our vernacular over the years – not, it seems when it comes to shopping. 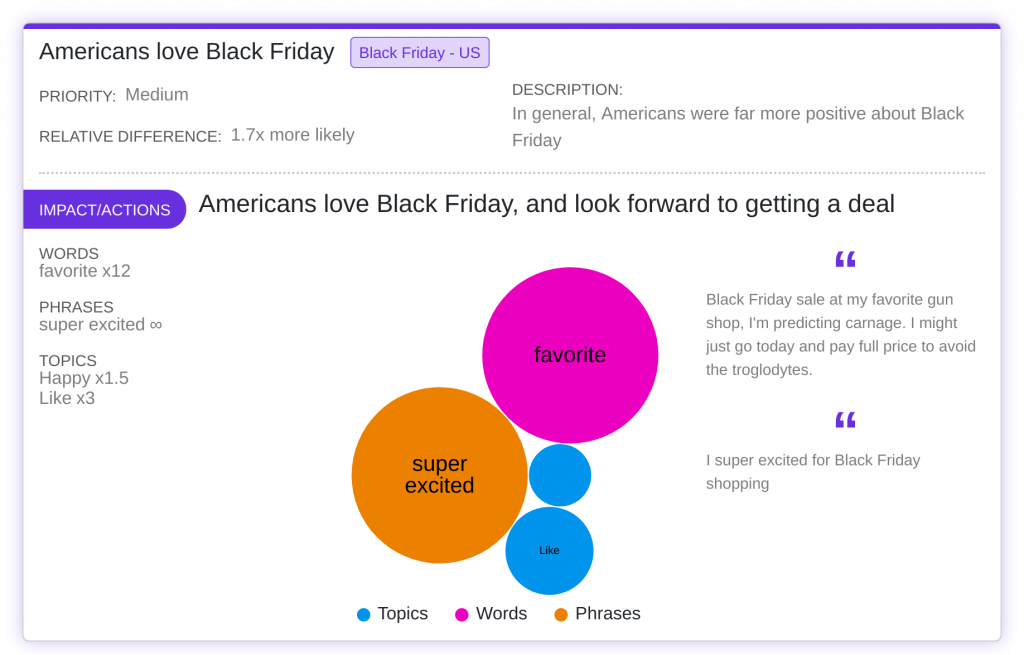 Things really aren’t so perky in the UK
The British are greedy, and we’re furious about it. The concept of Black Friday seems to tantanslise us, we’re desperate to buy, we want stuff, but yet we’re annoyed that this American tradition has ‘come over here’ and ‘conned’ us into making us so weak. And it’s not just a con, 1.5x more Brits think that it’s morally corrupt, and unethical too. 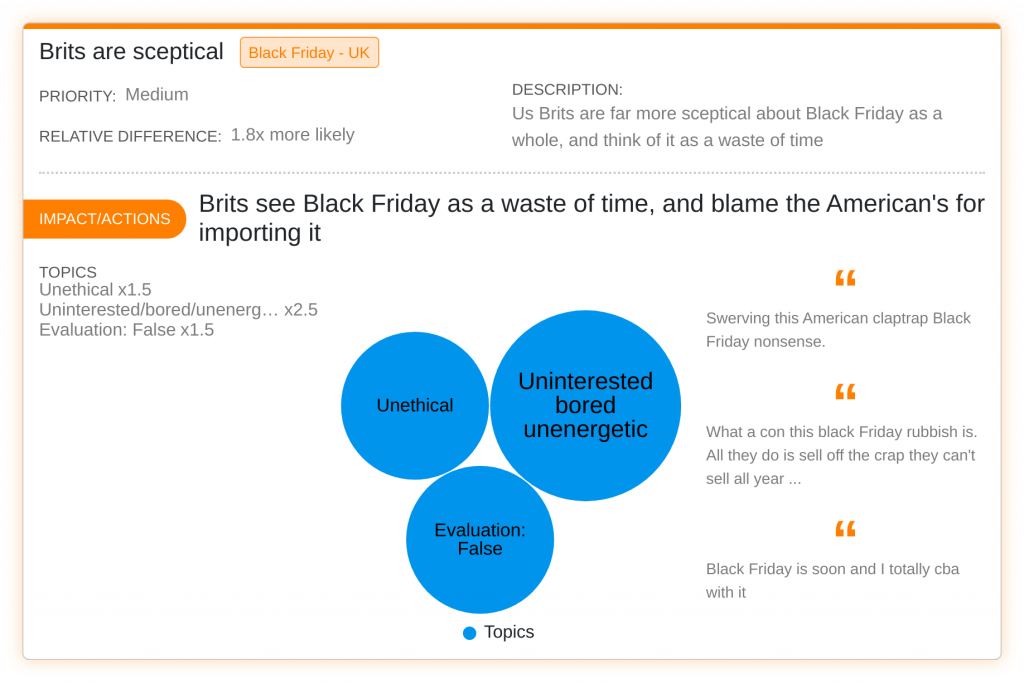 I love you, but I HATE you
We then did a bit more digging to understand some more about the Brit psyche when it comes to Black Friday. The results show how our language varies – there is a lot of dark, dismal, I’m annoyed and it’s ridiculous talk, but we still want to buy stuff. 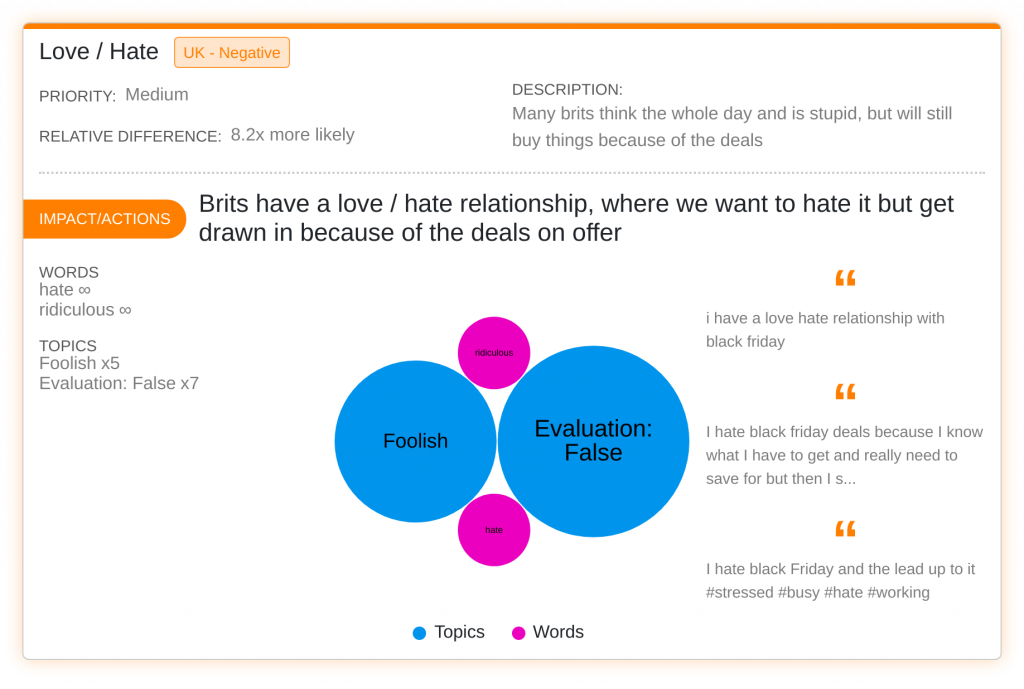 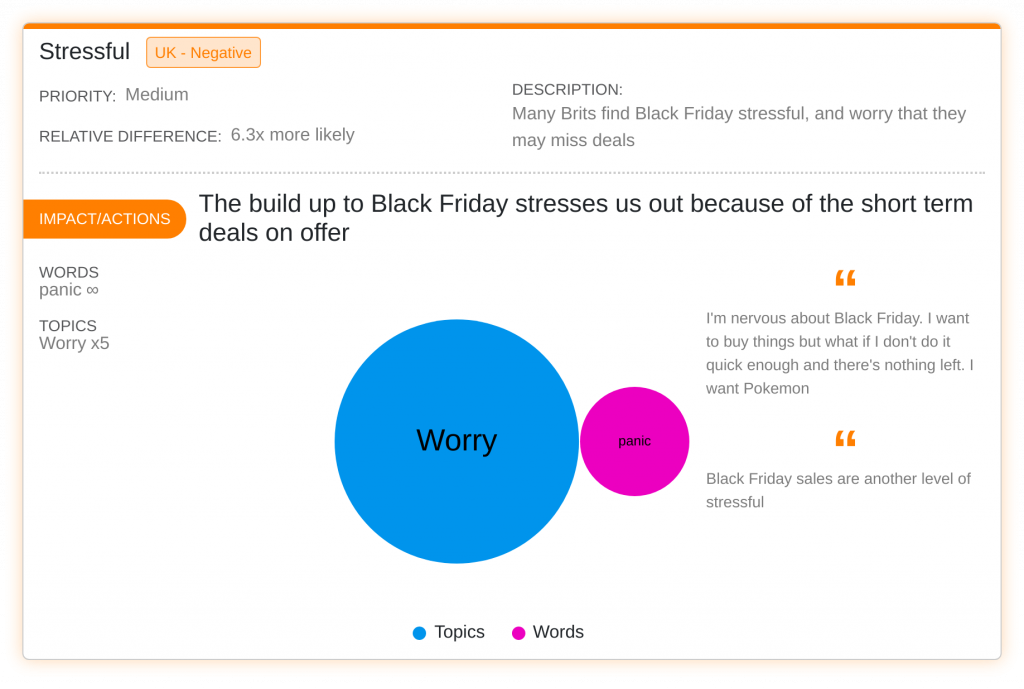 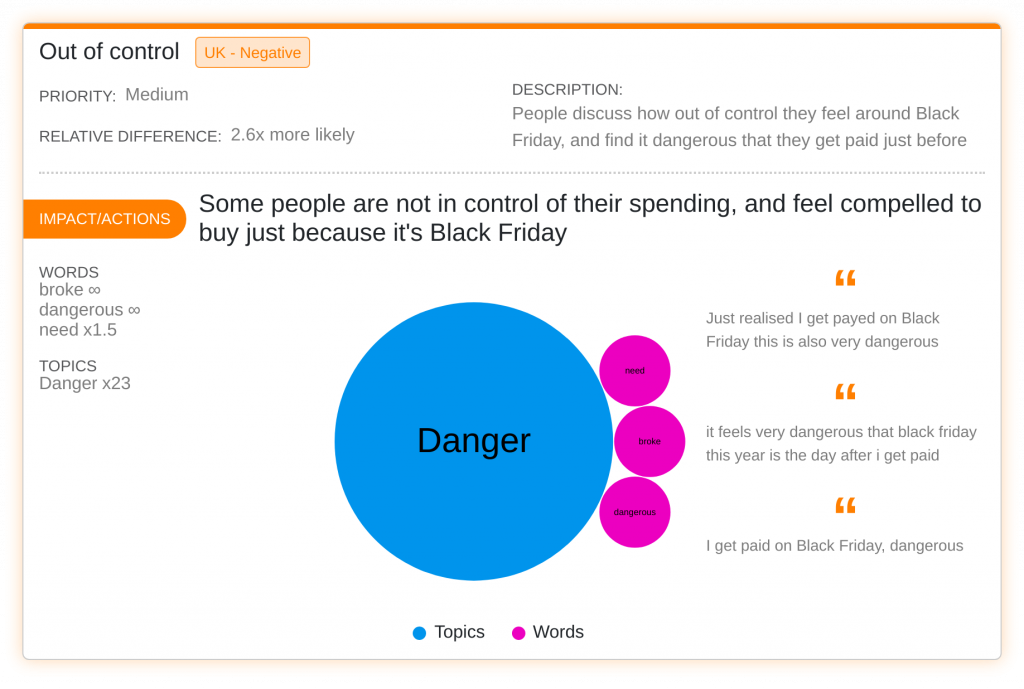 These language comparison results throw up a very interesting insight about consumer mindset, people and their finances. Consumers are compelled into spending, driven to spend money not because we enjoy it or can afford it, but because we are genuinely fearful that we might miss out on ‘a deal’. However, that hallowed deal spells out almost nothing but danger.

So, when it comes to Black Friday, Brits really do go back to black, or rather back to calamity, stress, fear and desperation – how very 2020.