How America reacted to the 2020 election, in Tweets

A few weeks ago, we used text analytics to track the state of the presidential race. Today, with a record breaking 147,000,000+ votes cast, we know that more Americans than ever were invested in this year’s presidential election.

To understand public response to Biden’s win, we compared Twitter conversations – from before the election was called and after. Analyzing the election this way can show us the linguistic differences in tweets between the two time periods, revealing how opinions changed and conversation moved on, after the winner was announced.

In the time leading up to the final tally, Americans were not so patiently waiting. While many states reported results in the hours post-Election Day, others like Nevada, Pennsylvania, Georgia, North Carolina and Arizona appeared to take their time. And Twitter users weren’t afraid to call them out for it. 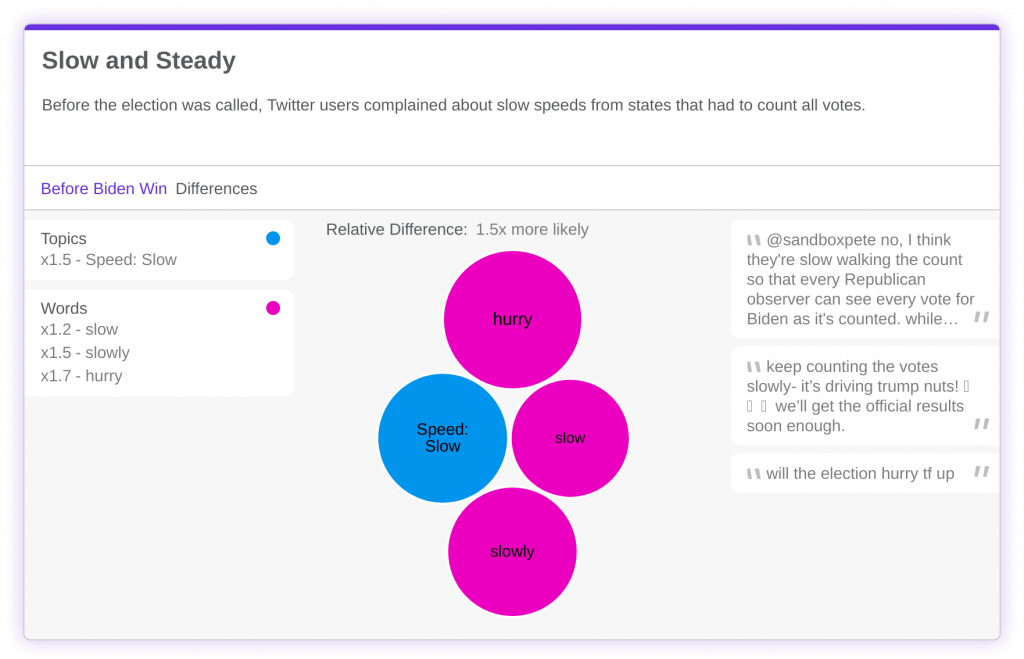 Americans were feeling a mix of emotions as they waited. The emotional rollercoaster ranged from ‘stress’ to ‘fear’ to ‘frustration’ – all likely brought on by ‘confusion’, another common reaction on Twitter. The state of the election was unclear for much of the time leading up to Saturday, leaving people confused as to what was taking so long. 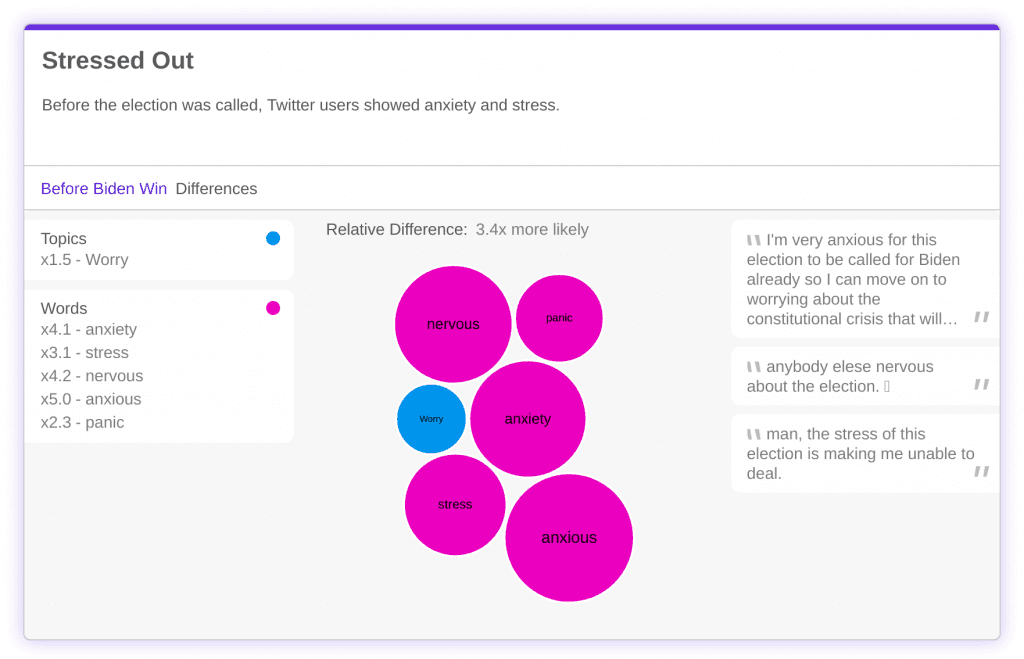 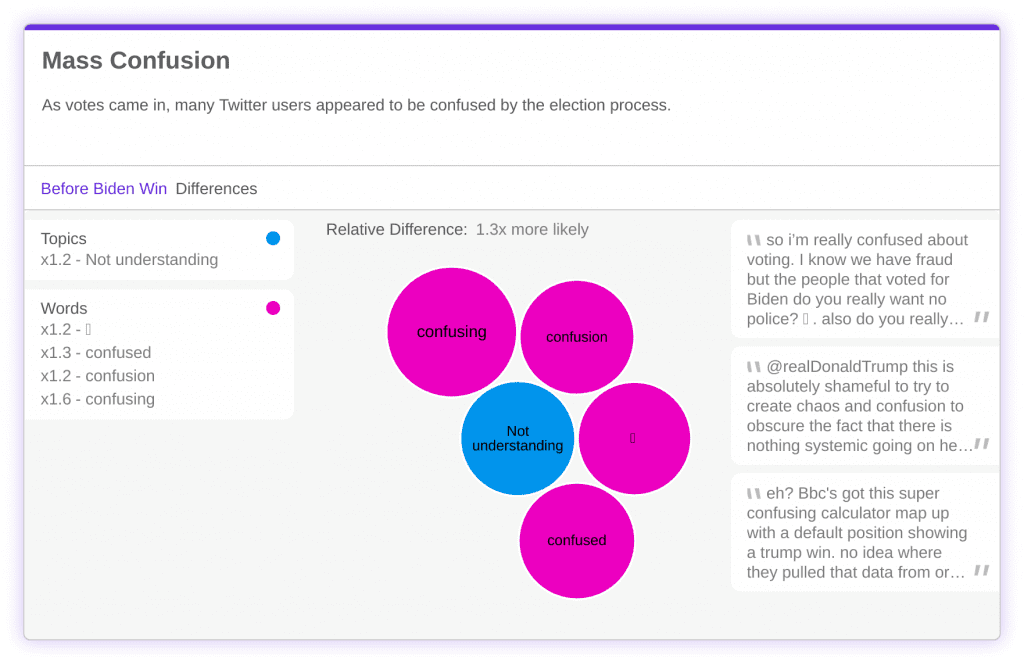 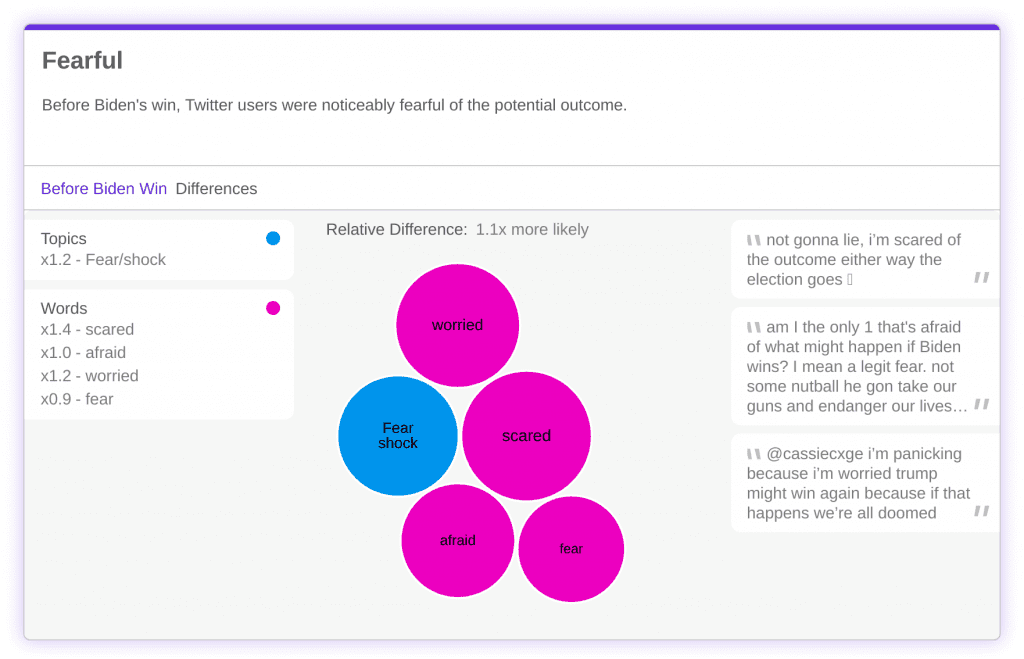 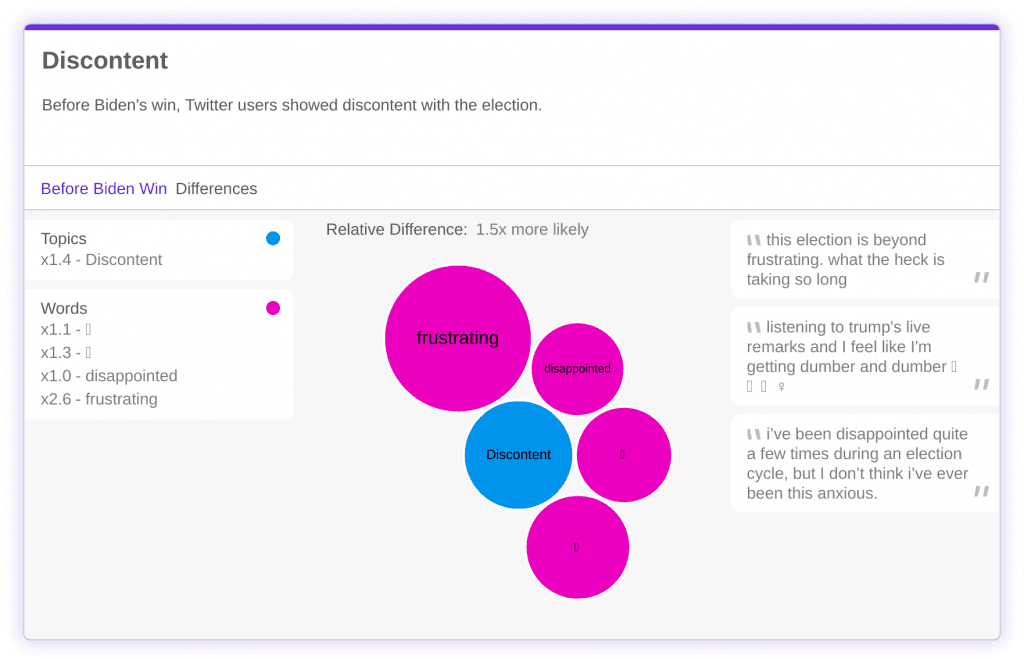 So how do you deal with stress and fear? A nice glass of wine, of course! Twitter users were not shy about revealing their coping mechanism of choice. Many voters admitted to drinking ‘alcohol’ in order to dull the stress and make a frustrating process a little more fun. 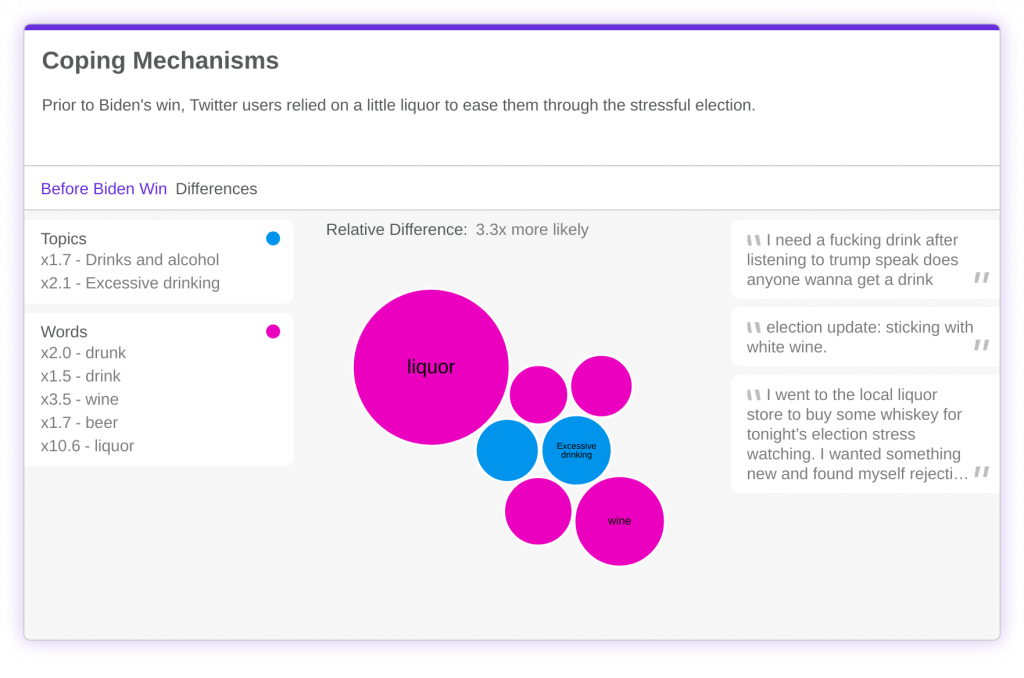 Even before they knew the winner, Twitter users alleged a ‘rigged’ election. Some reminisced on Russian interference in 2016, while others accused Democrats of committing voter fraud in 2020. 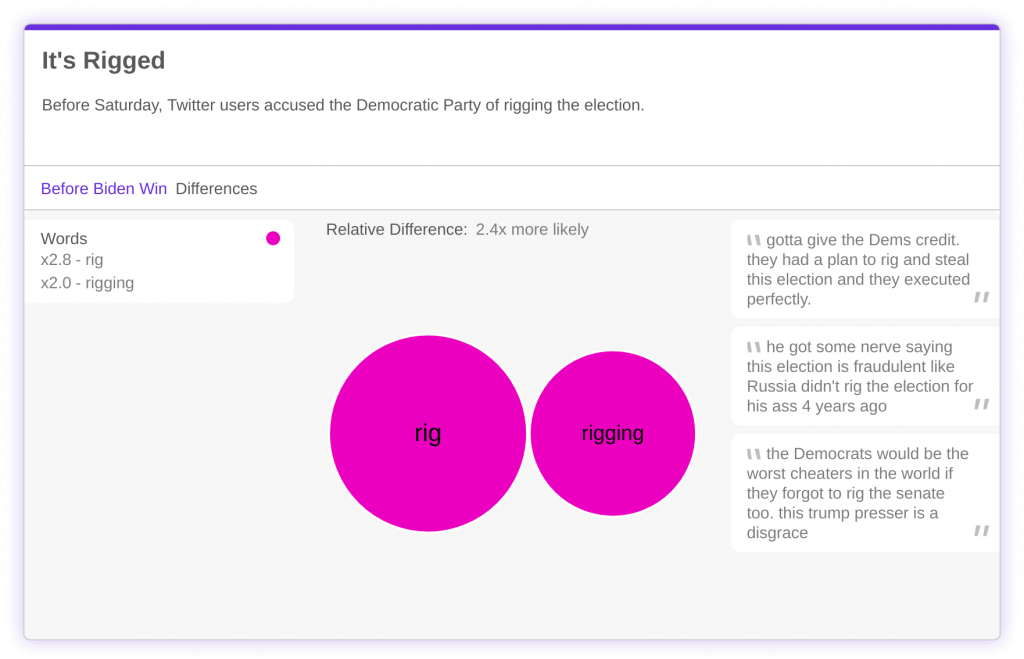 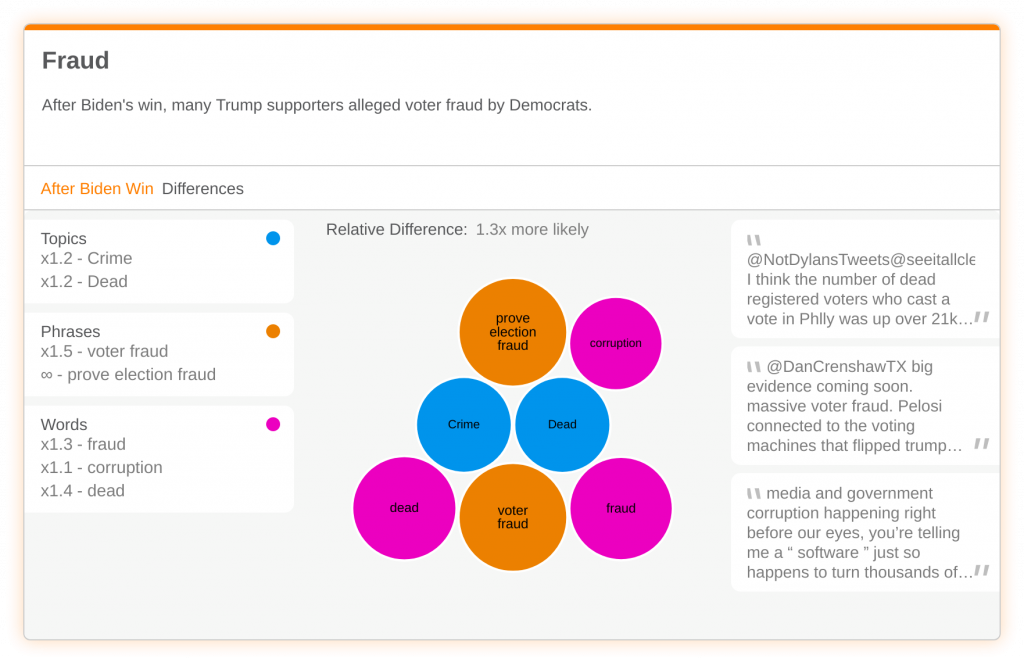 These allegations go beyond Twitter. Trump, who lost the election by 76 electoral votes, is in the process of submitting legal proceedings claiming voter fraud. In an attempt to overturn results, Trump voters support his decision to refuse to concede, encouraging the current president to ‘fight’ on. 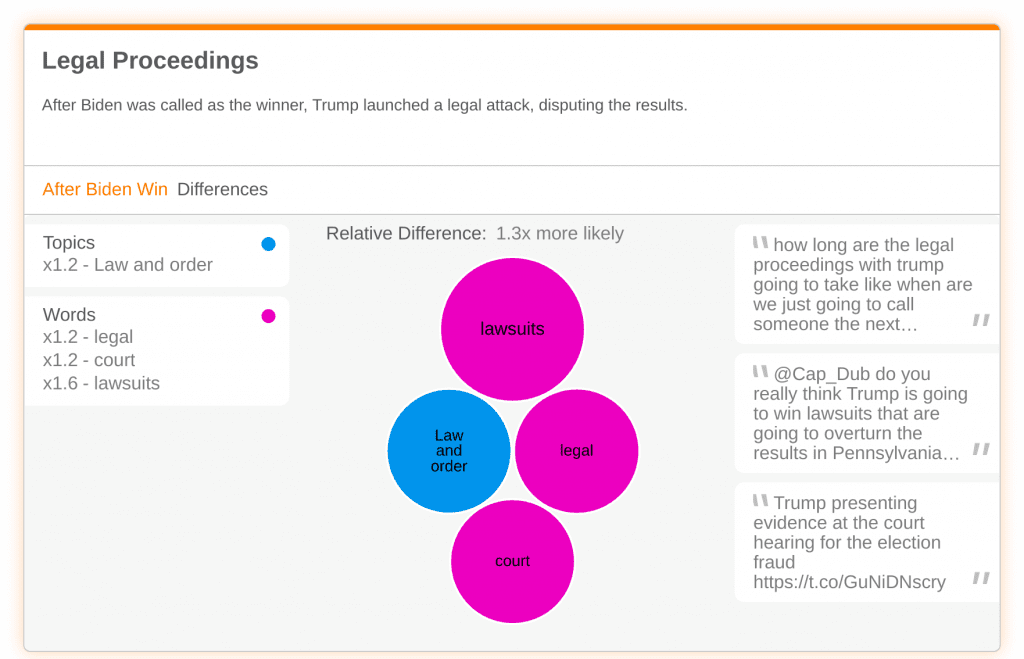 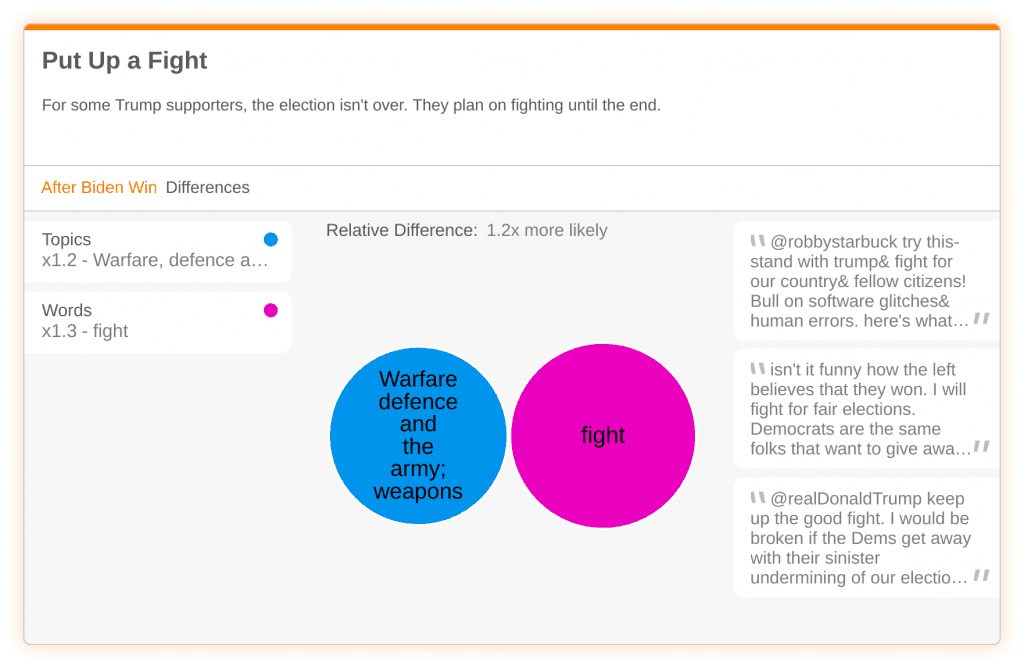 Emotions still ran high post-election. Twitter users felt ‘happiness’, ‘relief’ and a mix of feelings they could only describe as ’emotional’. Many attributed these emotions to Biden’s win, but others were simply grateful for Trump’s loss. 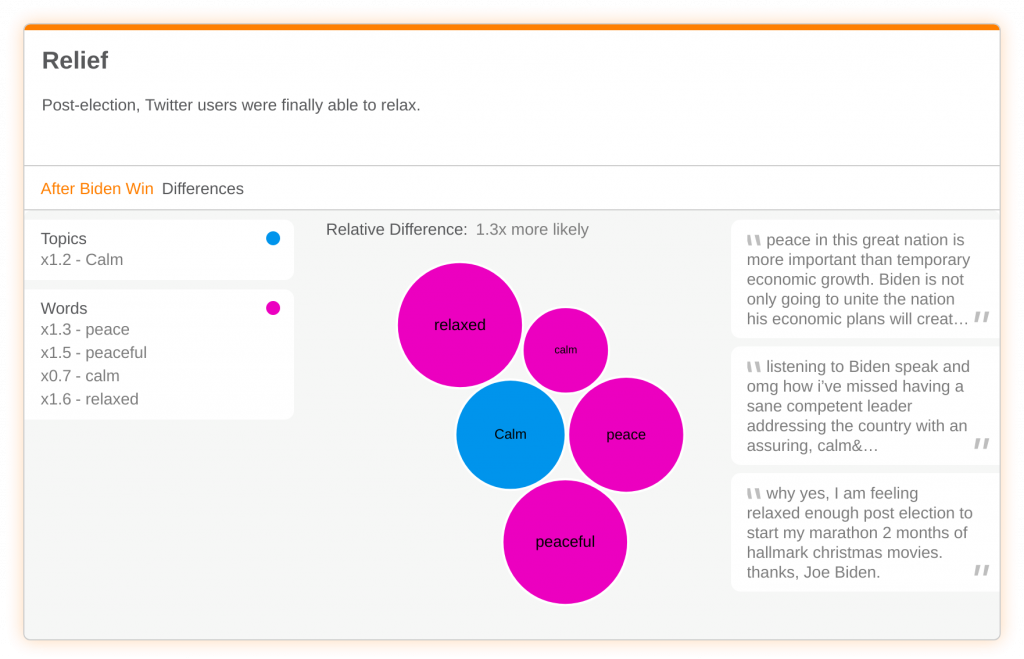 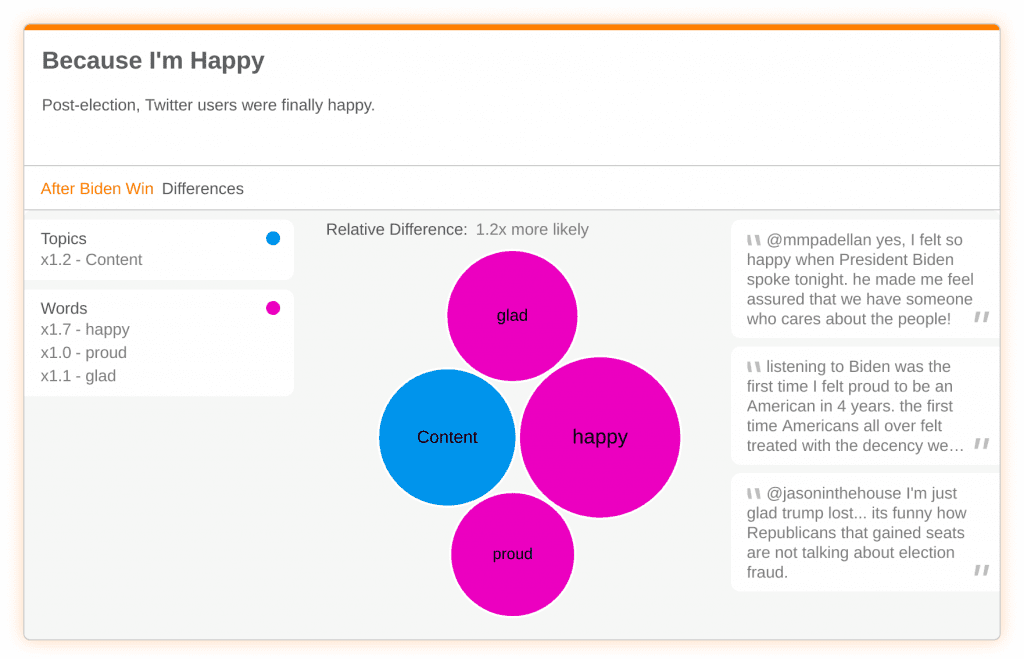 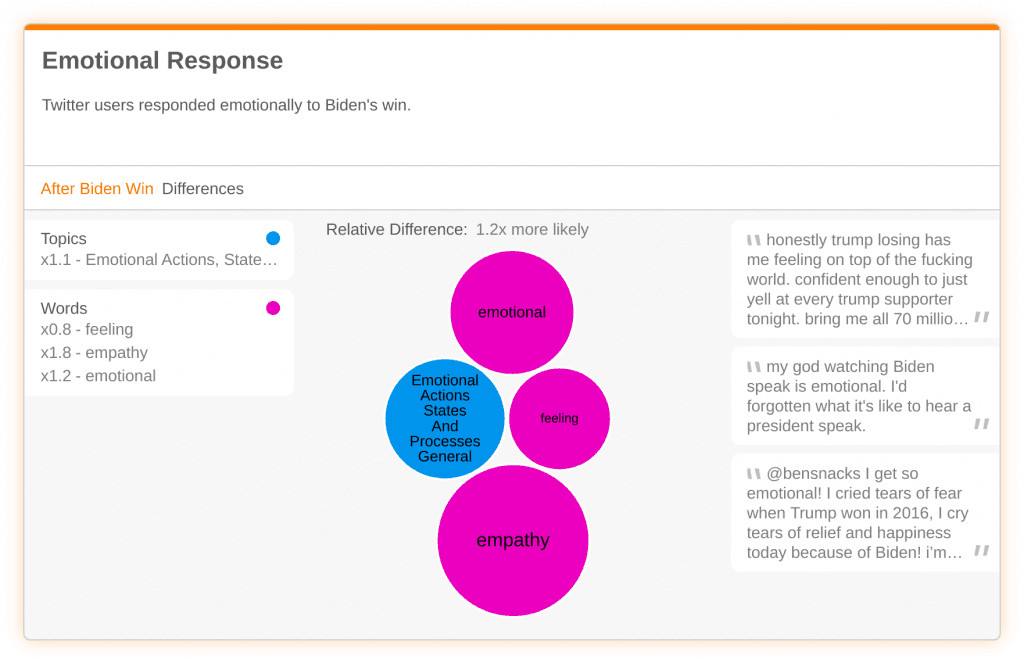 These emotions couldn’t be contained. In the minutes and hours following the announcement, Biden voters took to the streets in ‘celebration’. Americans ‘partied’, ‘danced’, popped bottles of champagne and ‘paraded’ through their respective cities. 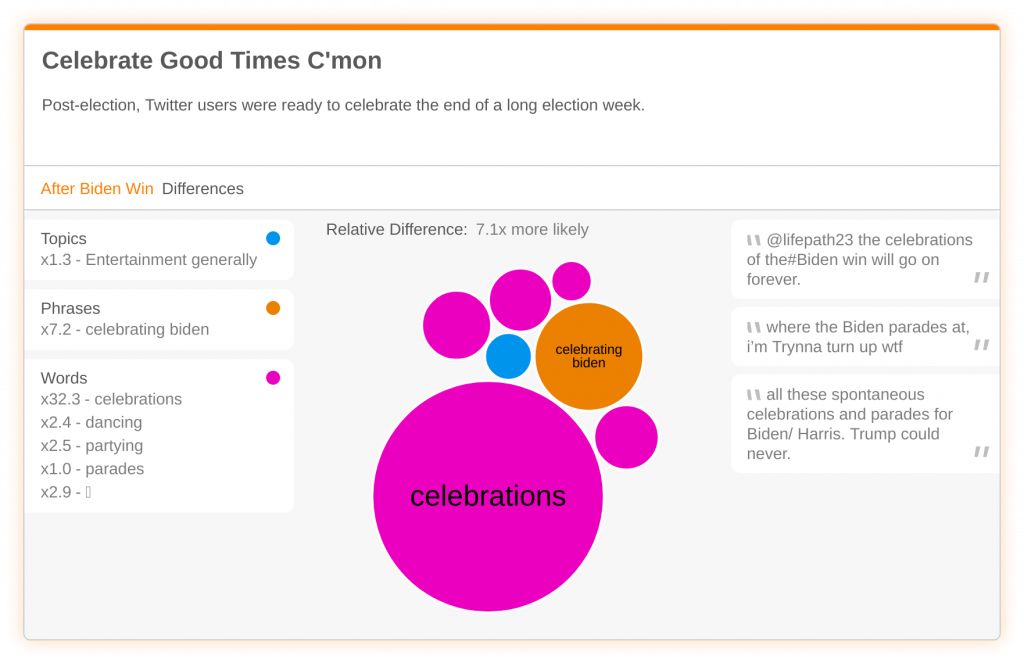 This celebration reached beyond the streets and into the stock market. Twitter users were surprised to see the ‘stock market’ perform well after Biden’s win. Despite rhetoric from Trump claiming Biden would hurt stocks, the market appeared to be optimistic. 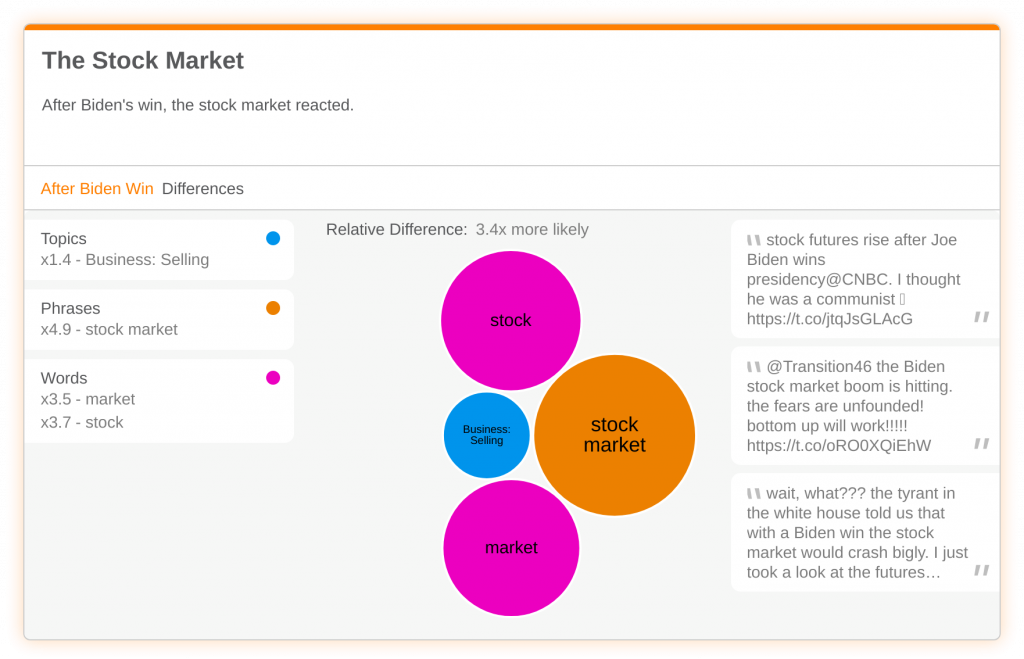 Relative Insight makes sense of your qualitative data. From social media to web copy to survey results, give us a call to learn more.