Once upon a time, in the golden era of chequebooks, bank tellers and ballpoint pens on chains, the banking giants lived unchallenged: Natwest, Barclays and HSBC. They ruled with little disruption. An age-old tale of unobstructed dominance over our financial needs. We, the people, embraced their rule. Until…

…The peaceful bliss was disturbed by some ‘giant killers’. Digital rivals more commonly known as the challenger banks. What started as a digital phenomenon for a handful of early adopters, has flourished and taken root in today’s society. And now, our wallets glow brilliantly with the bright orange of Monzo and pale blue of Revolut, to name just a few.

Will this fairy tale rivalry have a happy ending? Must one fall so the other can thrive? To understand more, we ran some competitor comparisons. We looked at news coverage that reported on a a selection of challenger banks – Monzo, Revolut, Starling and N26, and compared the language in this coverage to reports and articles about the classic high street banks – Barclays, NatWest/RBS and HSBC.

By comparing the language in these two models, we looked for the differences in the way each were talked about – rather than simply looking for mentions or sentiment.

The times, they are a-changing

Right now is a time that’s riddled with uncertainty. You don’t need text analysis to observe the level of fear and concern that’s still sweeping the nation seven months into the pandemic, especially when it comes to finance and the economy. 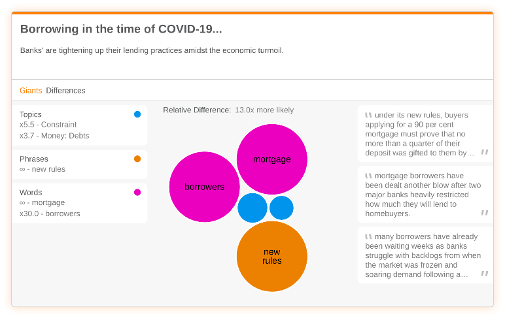 In this competitor comparison, what we found is that reports about the giants talk a lot about how they are noticeably tightening up their lending practices. During times of crisis and economic decline, many people have turned to their banks for support , but with phrases like “new rules” in heavy circulation with reference to these giants, the terrain for consumers is surely changing.

But this doesn’t mean it’s trouble-free in the land of the challenger banks. Many giants are tentatively navigating “new rules,” yes, but our analysis has revealed there is an unease about the future existence of challenger banks altogether, with stalwarts like Monzo fuelling these doubts after warning of “going concern” in the press. A likely red flag for new and existing consumers across all these challenger brands… 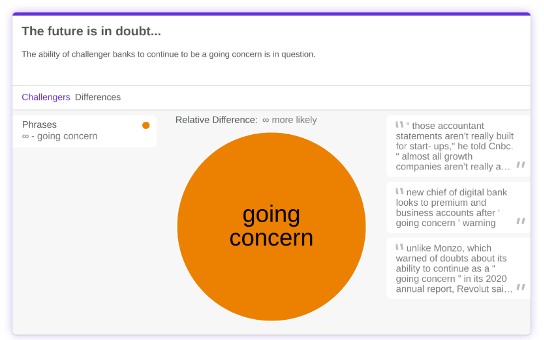 A light at the end of the tunnel?

In turbulent times, the easiest thing to report on in a sector that’s suffering, especially during a pandemic is the negativity. We’ve seen that “growing concern” and “new rules” are words heavily associated with banking right now. But, beyond the doom and gloom, banks are also the places where we’re looking to support our resurgence, with “help Britain recover” and “financial strength” amongst the most used phrases for giants. 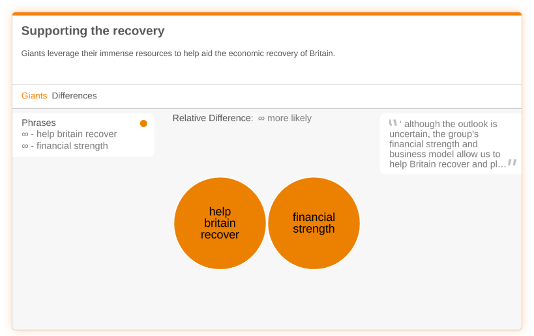 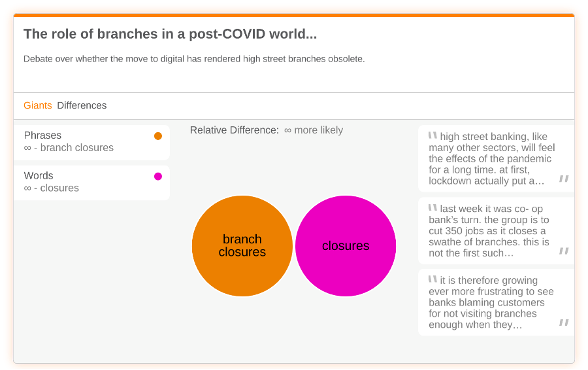 Peas in a pod or enemies ‘til the end?

Comparatively, it’s beneficial for giant and their ‘killers’ to to co-exist; learning and benefitting from each other’s positives and pitfalls.

As giants dial up their digital presence and UX to increase customer satisfaction and reach new digitally inclined customers, challenger banks are learning from existing models of how to crack the B2B markets and increase revenue streams.

This competitor comparison highlights that both giants and challengers (and their consumers) must continue to navigate the new normal and roll with the punches as time passes. Each has carved out a clear portion of the market, intersecting at very few significant points. Though time is changing and some “new rules” change with it, it does appear that each can live in harmony while the other still exists… for now.

Don’t miss our next Spotlight Series webinar ‘Giant Killers’: The Tale of Challenger Brands on October 27 to hear about more industry-disrupting innovators.

Hosted by Relative Insight account manager, Will Sohler, with guests from the the PR, marketing and ad world, this event looks to discover more about how consumers have been feeling, thinking and talking about the way challengers have shaken things up – and how established brands and businesses have had to react in order to stay relevant.

We will highlight a number of case studies and host a discussion showcasing how by comparing language data  – accessed from a variety of sources including social media, forums, surveys and online media – unexpected, and very exciting consumer insights can be revealed.