Do podcasters speak differently? An example of transcript analysis

If you’re anything like me, there’s nothing like good podcast for a long drive/commute/ Saturday afternoon. But what draws us to our favorite shows? Is it a specific calming voice or speech pattern, or something in a unique show format? Or is it quite literally, the subject matter?

Using Relative Insight’s text analytics tool, I looked at five popular podcasts across different genres. Relative Insight’s transcript analysis can show you similarities and differences between two language sets, including topics, words, phrases, grammar and emotion. I compared podcast transcripts from five recent episodes to the database of Standard English to understand how these hosts are communicating differently.

This American Life is presented almost like a play, often in several acts. Each week, host Ira Glass tells the story of human nature and life through small town tales.

True to its narrative format, This American Life employed the use of speech acts, including words like ‘said’ or ‘asked.’ A true storyteller, Ira Glass also created timelines and linear order through the use of ‘then’ and ‘next.’ 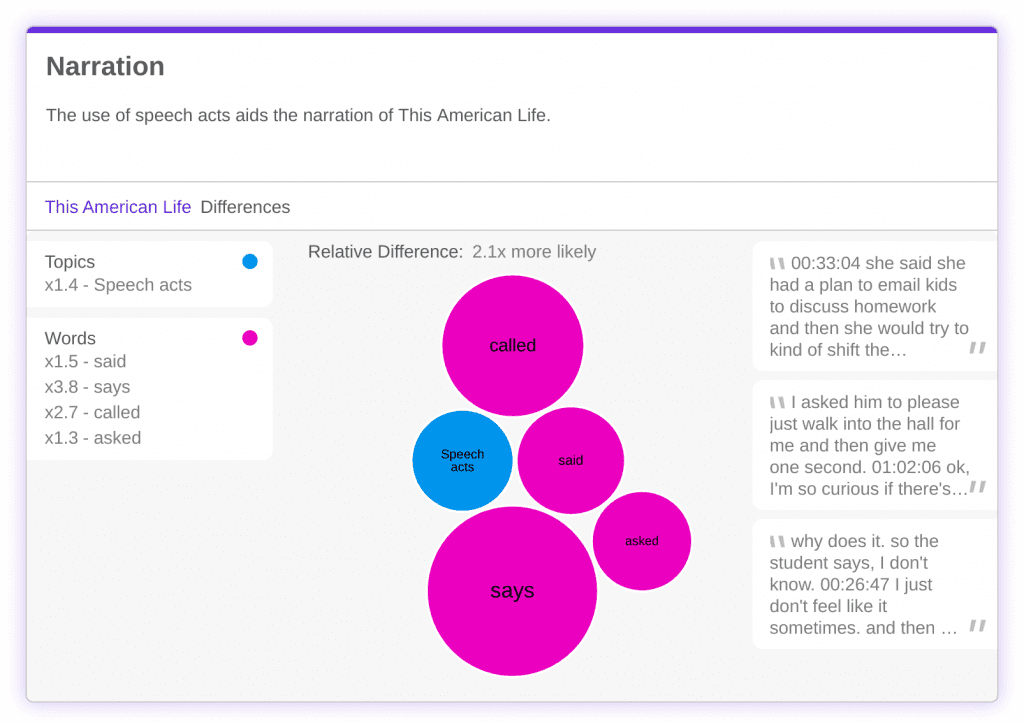 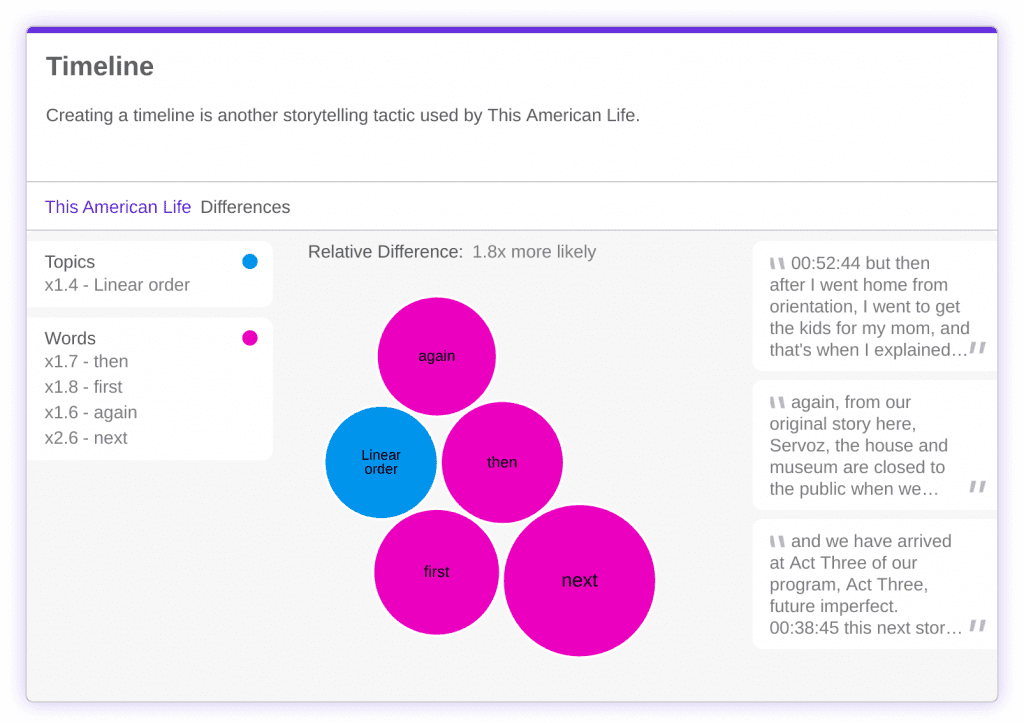 Stuff You Should Know covers everything from polyamory to blacksmiths to miniature golf. If you’ve ever wanted to know the history or the mechanics of a topic, hosts Josh Clark and Charles W. “Chuck” Bryant can break it down.

In our transcript analysis, we found that Josh Clark and Chuck Bryant are big fans of adverbs and adjectives ending in -ly. The word ‘basically’ appeared the most, with others like ‘totally’ and ‘absolutely’ making a decent showing. 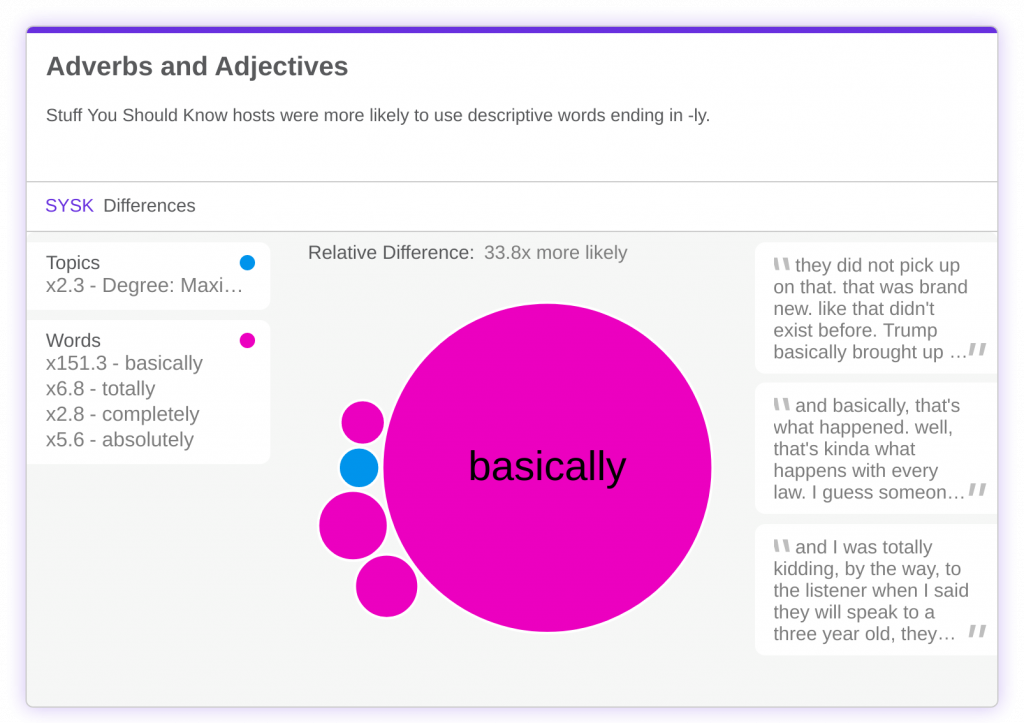 Pardon My Take: No Filter

This transcript analysis revealed that hosts Dan Katz aka “Big Cat” and PFT Commenter are definitely not afraid to offend, using words like ‘fuck’ and ‘asshole frequently.’ Sticking to that theme, they also often used intellectually insulting words like ‘dumb’ or ‘idiot.’ Apologies, I’m just the messenger. 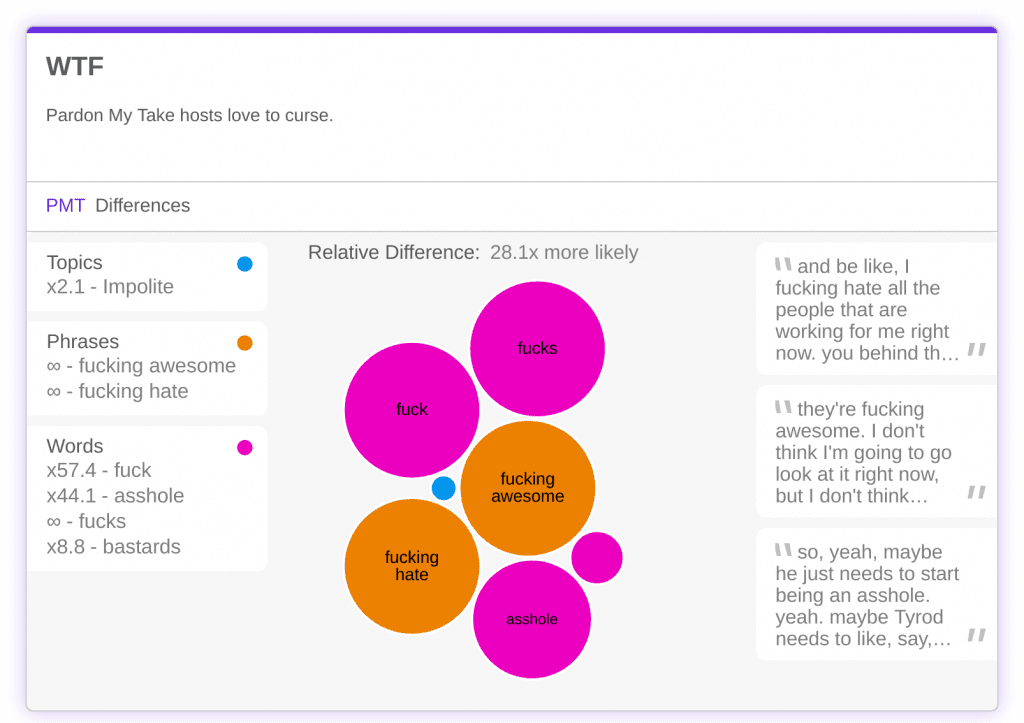 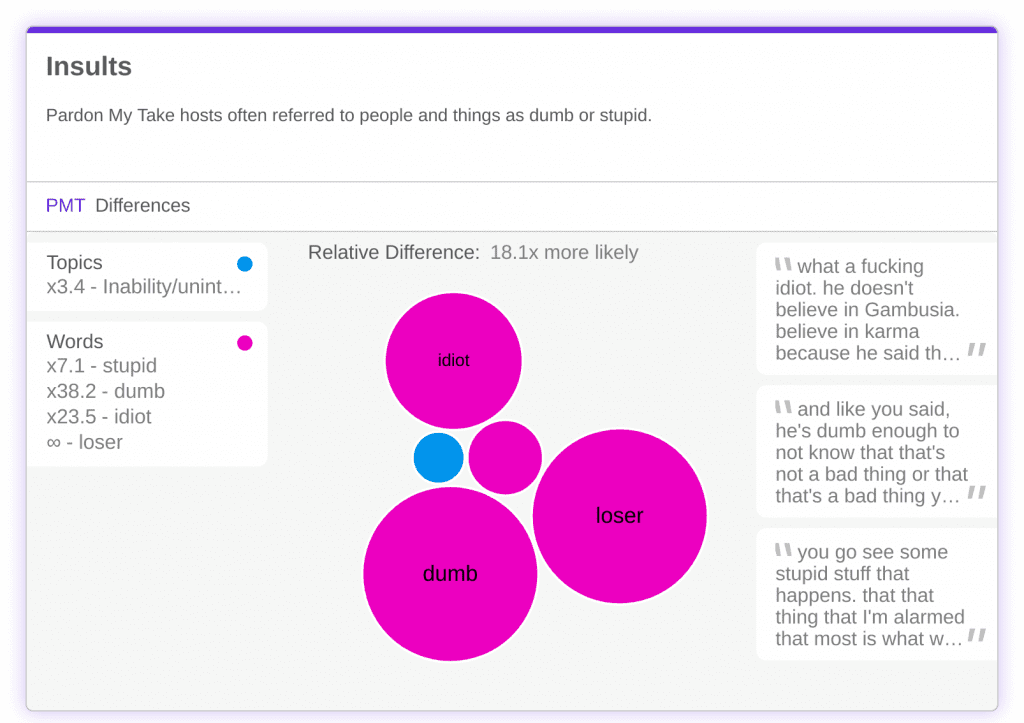 The Daily from the New York Times is a daily news podcast, with host Michael Barbaro taking you through the most important stories of the day.

As a news show with more formal language, the differences found in The Daily were more content-based. Common topics are law and order (no, not the long-running TV show), the environment and politics. 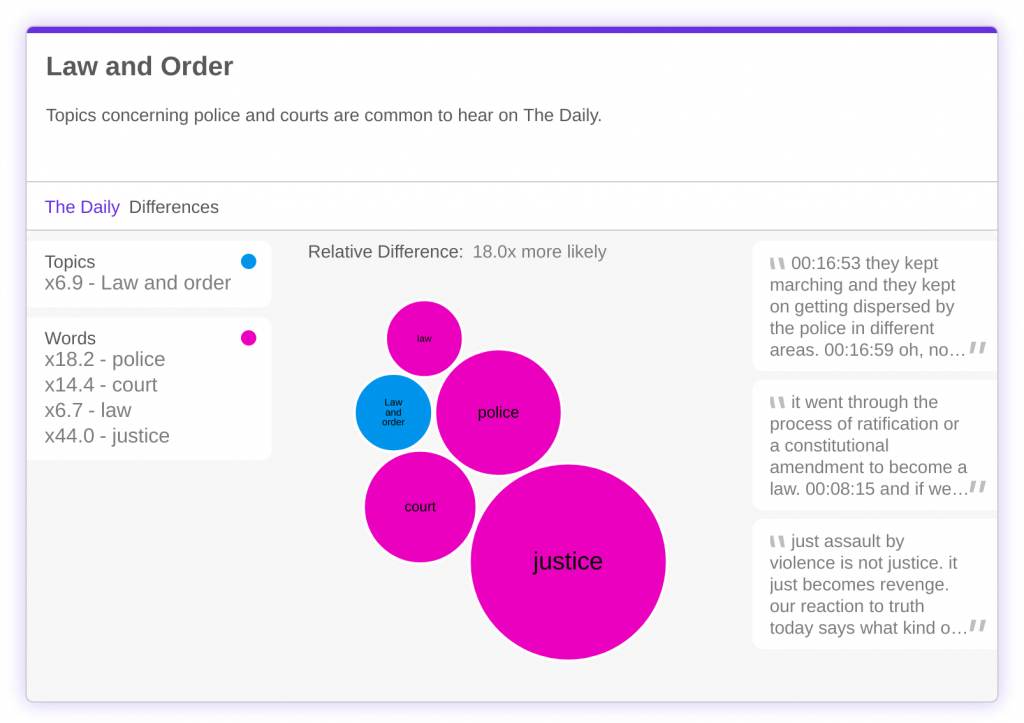 As purveyors of facts, The Daily was 20.5x more likely to mention specific amounts, measurements and percentages. This use of detail contributes to the credibility of the show. 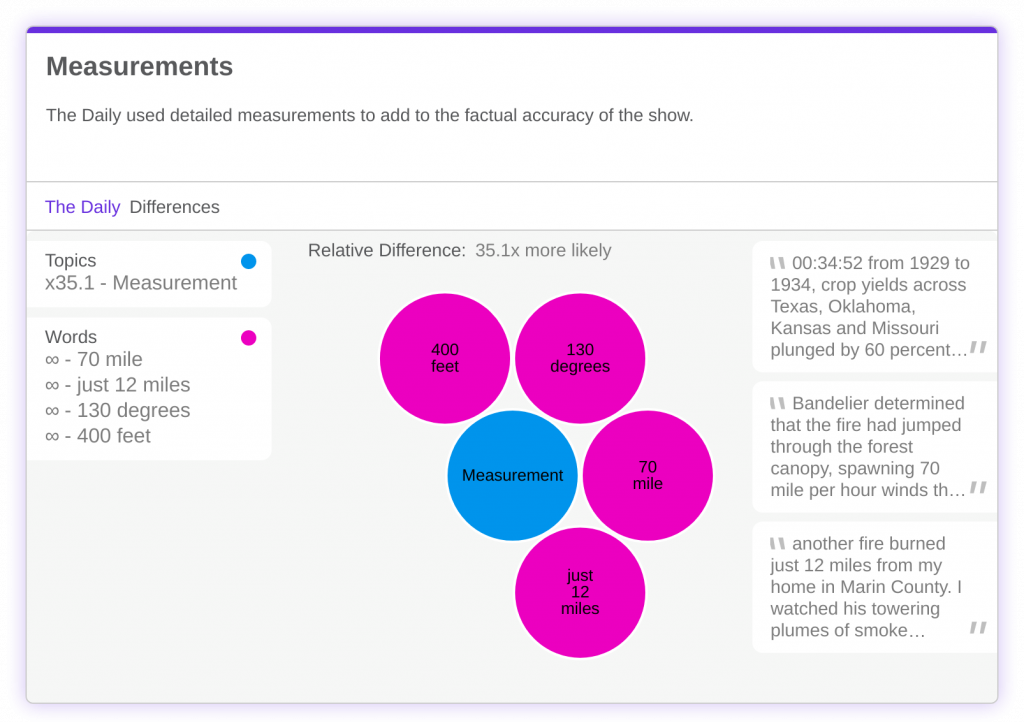 One trait specific to Joe Rogan was the use of words like ‘delusional’ or ‘insane.’ By using these extreme words he is able to exaggerate his point and add to the excitement of the conversation. 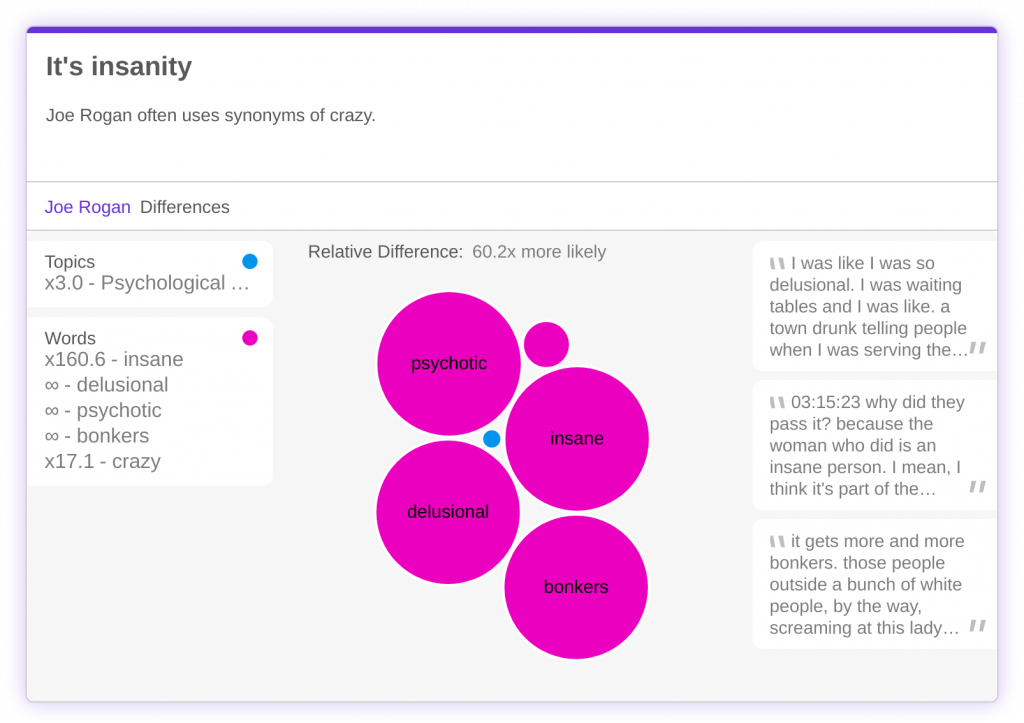 A few linguistic patterns appeared in all of the shows, so we looked at the podcasts grouped together against standard English.

What was once a hated word, ‘like’ has permeated the english language. The word, formerly reserved for Valley Girls, is now commonplace even in the world of podcasting. Hosts were 13.7x more likely to use the singular word and even more likely to use other forms including ‘feels like’ and ‘something like.’ 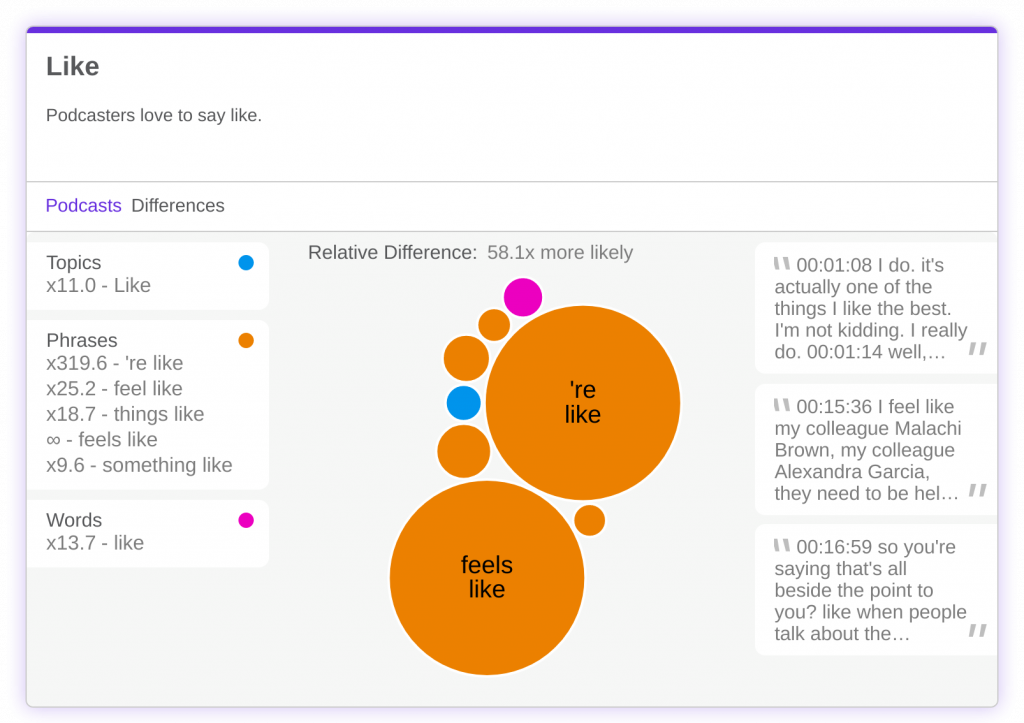 Interjections also pervaded podcasting, specifically hosts were 212.3x more likely to use the word ‘yeah.’ They typically used interjections to lead into a thought or respond to a guest or co-host.

Relative Insight can analyse any form of language data you give us. From transcript analysis and social media analysis, to analysing review data and survey analysis – the possibilities are endless!

Contact us using the form below, and we’ll show you how.