Every year the “Oracle of Omaha”, Warren Buffett writes a letter to the shareholders of Berkshire Hathaway, the company he built up in the 1970s.

Over the 40 plus years the company has been in existence, these letters have become essential reading within the investment world, showcasing insights and philosophies into the world’s 3rd richest man’s thoughts on strategy, company culture, loss and more.

Now, over the past two decades, Jeff Bezos’s annual letters to Amazon shareholders are gaining the same kind of currency, providing insight into how the world’s richest man thinks about efficiency, customer experience and innovation.

Wouldn’t it be great to analyse and compare the language data used in all of these letters in order to get in on some of that secret sauce and hopefully become billionaires ourselves one day? Well, as luck would have it, Relative Insight’s text analysis technology is here to do exactly that – the comparative text analysis part, not necessarily the billionaire-maker part.

In 1995, Amazon declared a mission statement saying they wanted to be the “Earth’s most customer-centric company”, and so not surprisingly Jeff spends a lot of time in his letters focusing on customers, customer experience and sales to customers as some of the major driving forces behind Amazon’s success.

Interestingly, “customer” is the most commonly used word across the majority of Jeff’s letters over the years, with “Amazon” being a close second.

This stands in contrast to Buffett over at Berkshire Hathaway who is way more likely to talk about “catastrophe”, “loss” and “failure”. 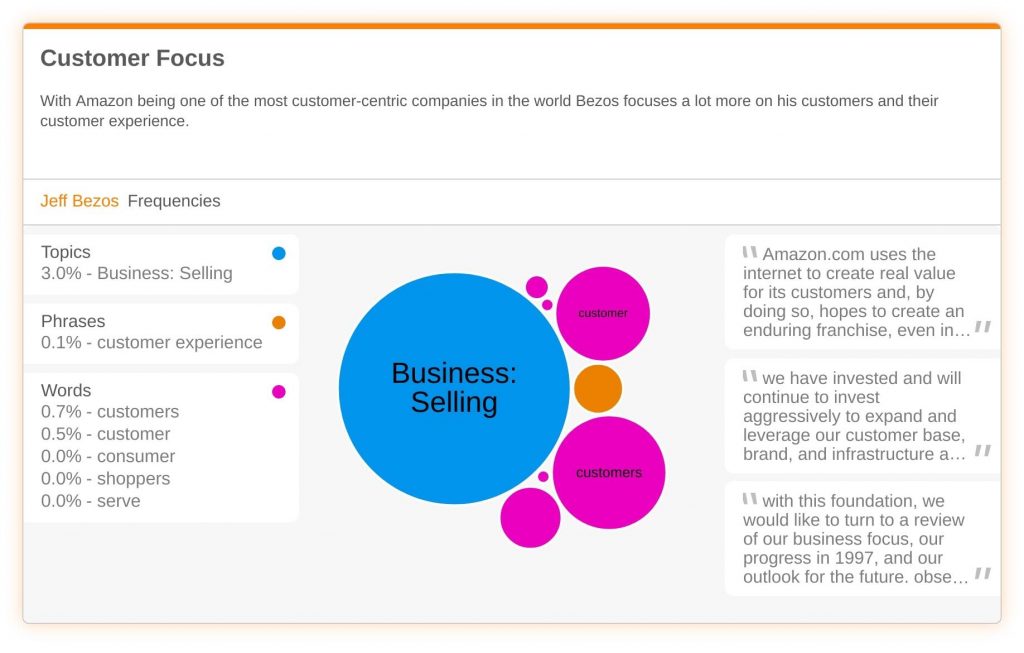 Buffett’s wealth is tied a lot more closely to the overall health and trajectory of the stock market, which often see significant rises and falls year to year. However, Buffett has been in this game over 70 years and is still chairman and CEO of the company at the age of 90! (and doesn’t look to be slowing down anytime soon!)

Failure and loss in business

Over his 70-year career he has seen the net worth of his holdings within the company fall by over 50% in value more than three times, which just goes to show that he is able to take huge bumps in the road in his stride – something he knows very well is in the nature of the investment game. 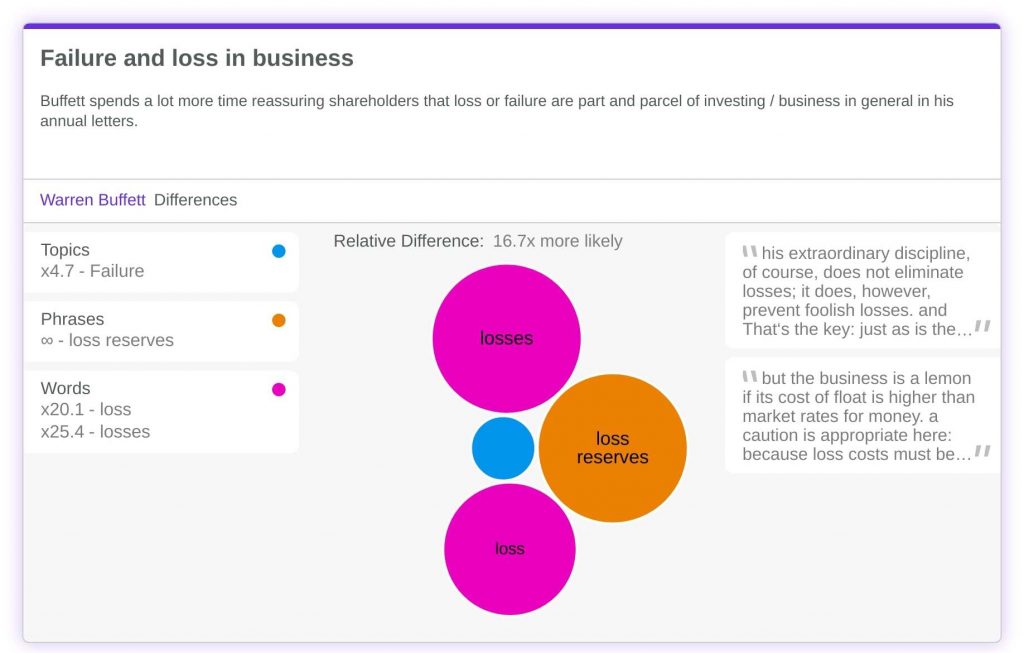 The desire to innovate and grow

Jeff on the other hand, seems to have an insatiable appetite for growth and innovation, being over x10 times more likely to use words such as “expansion” and “expanding” when discussing the progress of Amazon in his shareholder letters.

His appetite for growth, coupled with a desire to do so quickly makes Jeff twice as likely to discuss topics such as “speed”, including words like “quickly”, “rapidly”, “nimbleness” and agility in his comms. This is in no doubt due to the fast moving pace of the internet, where having a first mover advantage can mean everything in the success or failure of a new line of business. 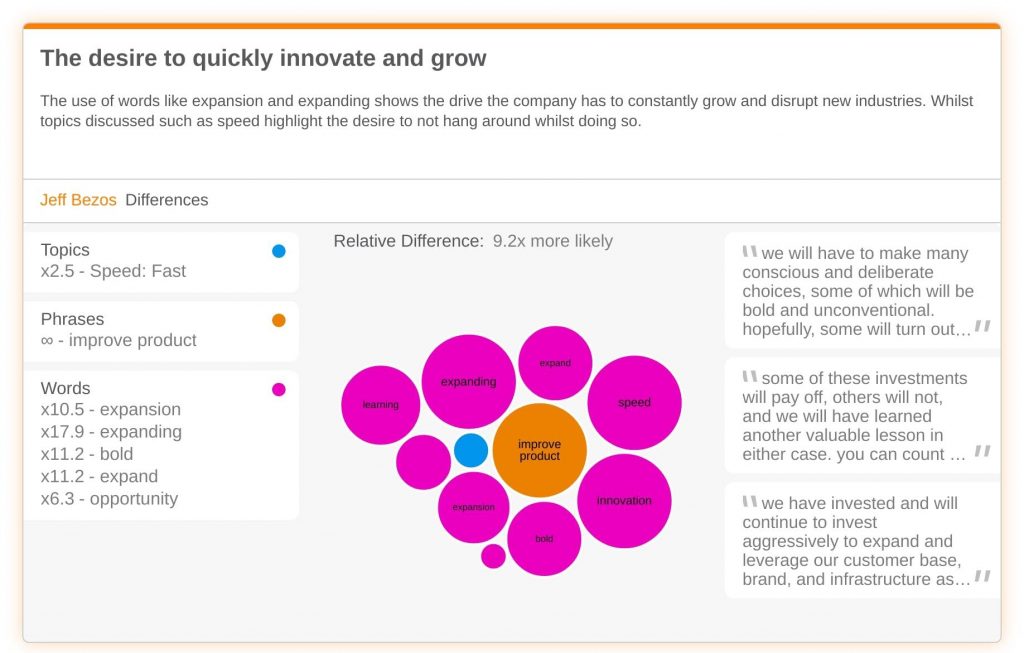 Think about performance over time

Buffett however is more likely to discuss the previous year and past performance as a snap shot over time when it comes to judging Berkshire Hathaway’s financial success with shareholders.

He knows from past experience that during the average lifecycle of the market, an investor experiences years of positive and negative returns. Factors that are often outside any one individual’s control. This comes across in his letters where he tries to not focus too closely on a single years negative performance, such as the current economic outlook he is facing with Berkshire having recently reported record losses of over $50 billion in the first quarter of 2020. 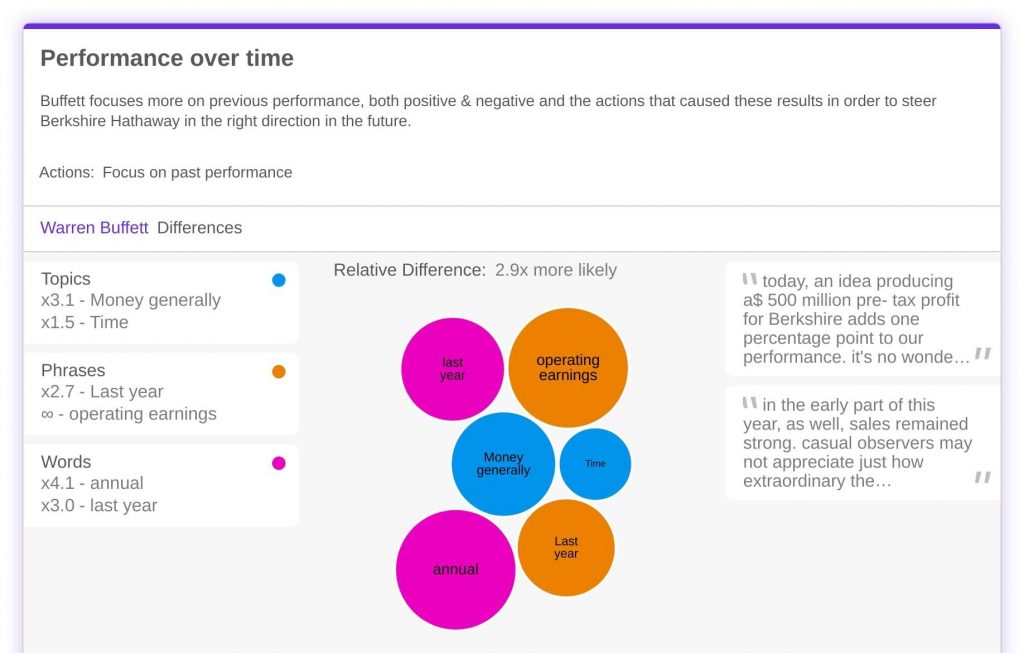 Not too bad returns either way if you ask me, but even in these huge numbers you can still see the difference a year makes.

It turns out that the path to becoming a billionaire is way easier than we all thought. Through my analysis, I think I have figured out what the ingredients are that makes up that sweet, sweet secret billionaire sauce…

I think it’s as simple as creating a company that focuses on the customer, is constantly innovating and disrupting new industries whilst also aggressively expanding its original customer base. You must agonise over earnings and other monetary and performance metrics, whilst not worrying too much about anything really – because after all, any moment in time is just a snapshot of the businesses performance at that given moment. The economy is bound to turn at some point anyway so you’ll end up losing the majority of your businesses net worth, whether you like it or not.

Relative Insight can analyse any form of text data – whether it’s billionaire’s letters or customer review data left about your product on Amazon. It could be anything from social media to surveys, to podcast transcripts to customer service call transcripts – the world’s your oyster!

How to analyze employee engagement surveys and feedback

How qualitative analysis can support employee engagement, recruitment and retention