Bernie or Joe – choose your fighter!

Amid the all-encompassing COVID-19 media coverage, something might have slipped under the radar. As impossible as it might seem, we might have forgotten that there is a US presidential election going on.

On Sunday, March 15th, the two Democratic frontrunners, Bernie Sanders and Joe Biden, faced off in a one-on-one debate, arguing about who would be the best one to defeat a former steak salesman and win the White House. They spent a lot of time attacking each other’s past career and voting records. Sanders even called out Biden’s ‘lies’ by encouraging everyone to “Go to the YouTube” to find the truth.

I did not go to the YouTube but went straight to the US Congress Records to see what both candidates have said over their congressional careers. I collected the last 1000 congressional transcripts from both Joe and Bernie, spanning 1998 to 2020. I used the Relative Insight’s comparative text analysis platform to compare the two.

It is important to disclose that this blog is probably not 100% neutral. I am an American who supports Bernie, but will 100% vote for Biden if it is between him or the current American president as of March 2020. These views are my personal views, and not that of my employer, Relative Insight. Now, you may carry on…

During his career in the Senate, Biden focused a lot on crime and war during his congressional career, and he was two times more likely to talk about law enforcement than Sanders.

And he was also 1.8 times more likely to talk about violence and war than Bernie. 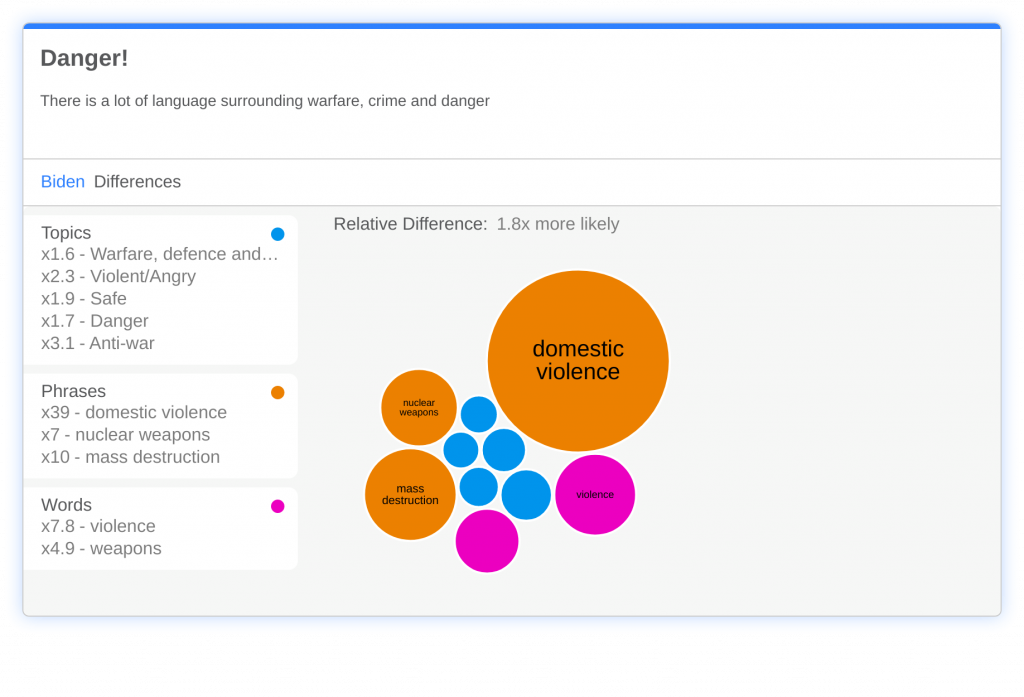 All of these results make sense if you consider:

In 1994, Biden drafted the Violence Against Women Act to provide funds for investigation and prosecution of violent crimes towards women. A lot of this language overlaps with the insights above. He has talked about this issue 1.9 times more than Sanders over his career. 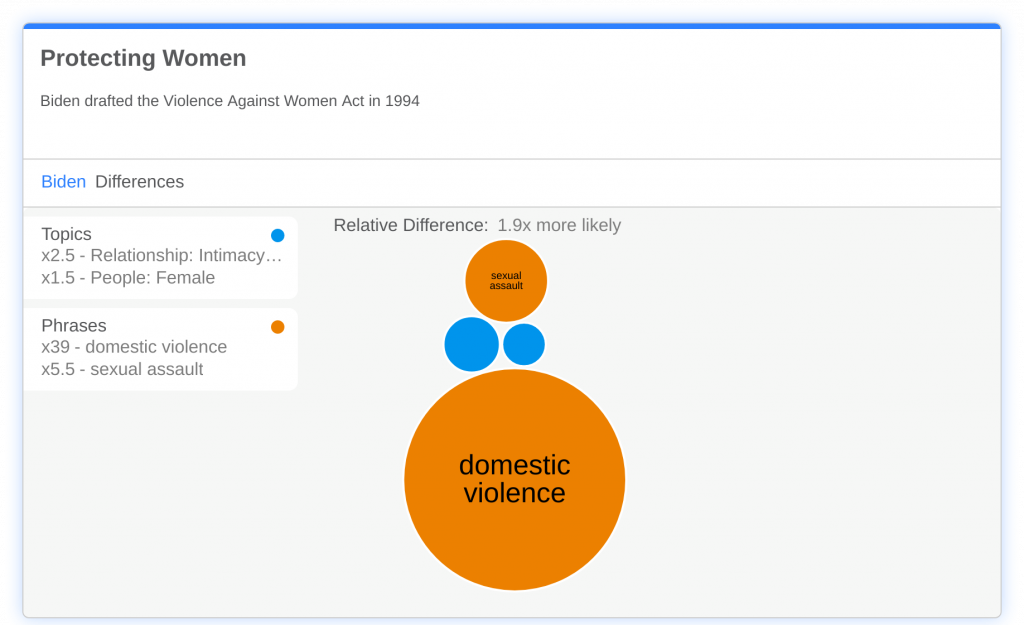 Bernie has stirred up right-wing pundits, inciting cries of “Communism!!! Venezuela!!! Stalinism!!!”. However, Bernie is not a communist but a democratic socialist and this political leaning is reflected in the things which make him different from Biden.

Bernie is 1.7 times as likely to talk about wealth inequality. He is often heard ranting and raving against the billionaires and corporations which have so much sway over the American political system. 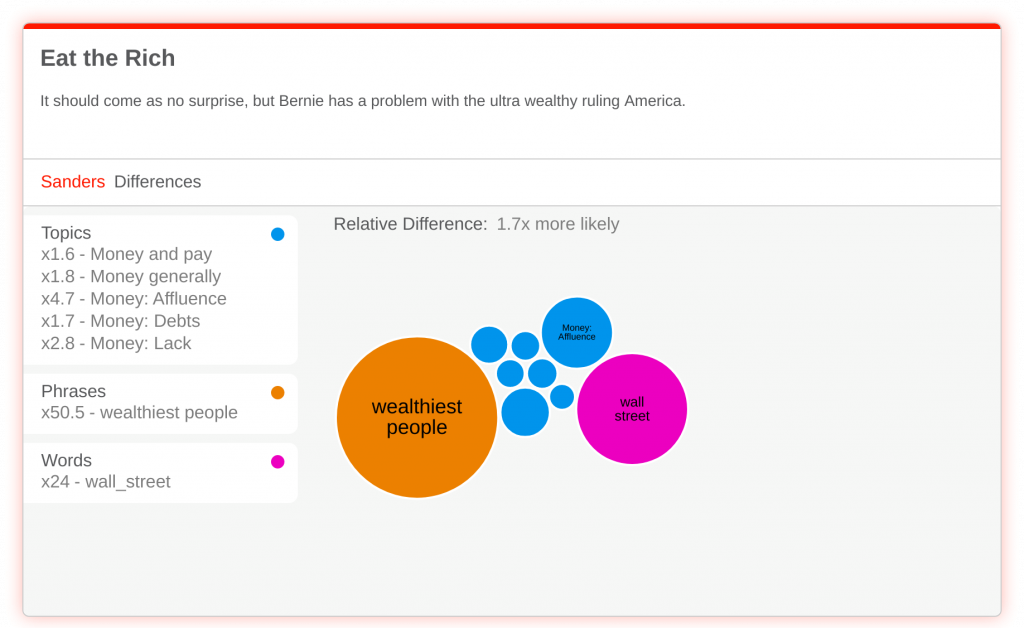 1.5 times as likely to talk about workers and workers rights. His focus and concern for the individual worker are apparent. 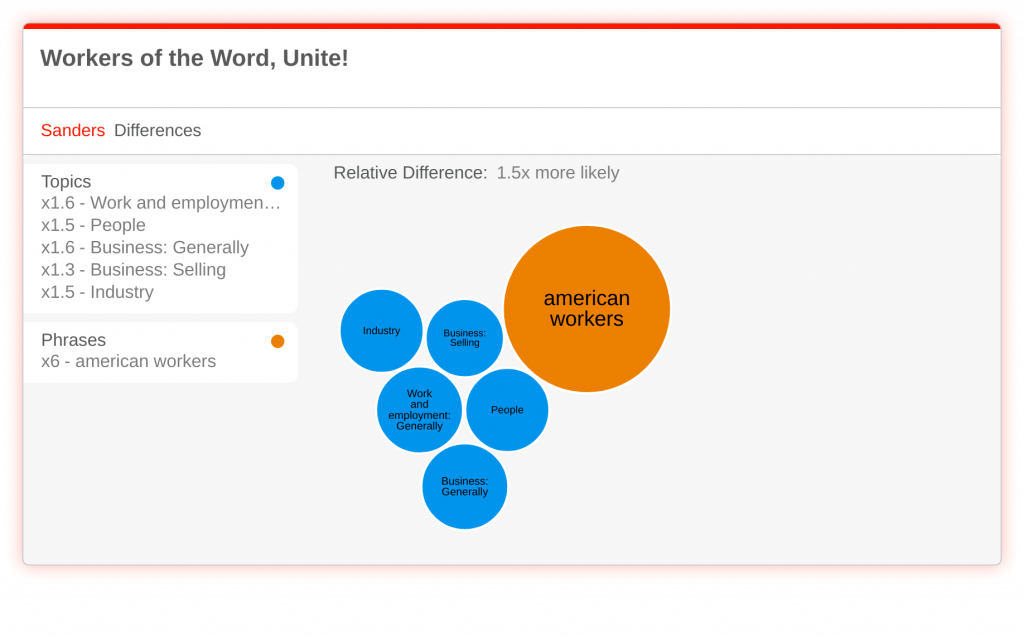 And he is 1.7 times as likely to talk about universal healthcare than Biden. A major part of his platform is Medicare for All, so this checks out. 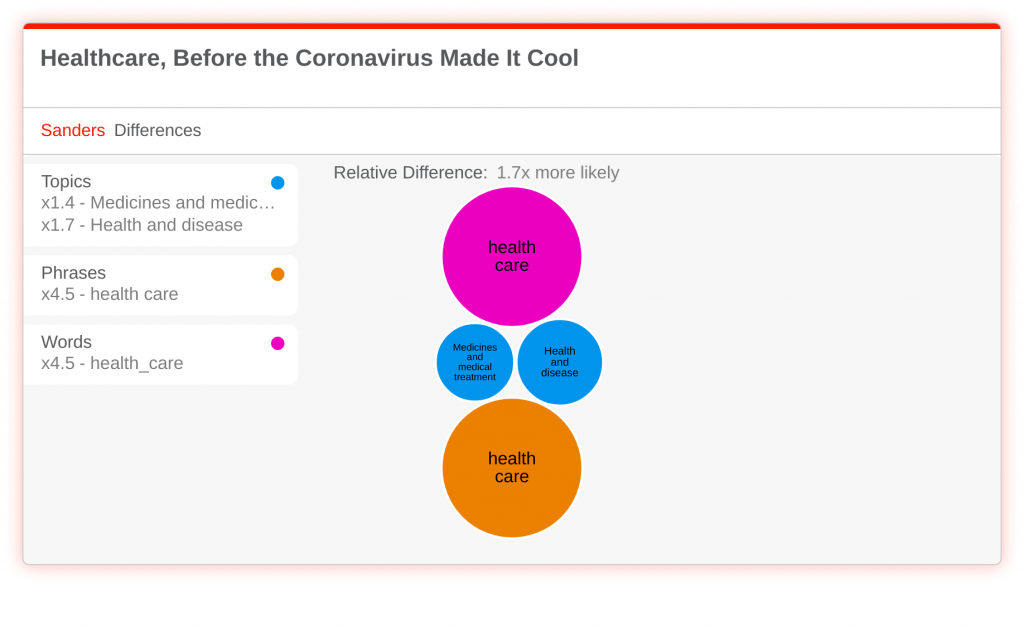 All classic socialist agendas, and if you listen to Bernie talk for more than five minutes, you probably heard about one of these topics.

Also, supporting the claim behind his campaign slogan, Not Me, Us, Bernie is 1.5 times more likely than Biden to use a First-Person Plural pronoun. That means he uses We and Us a lot more than Joe. 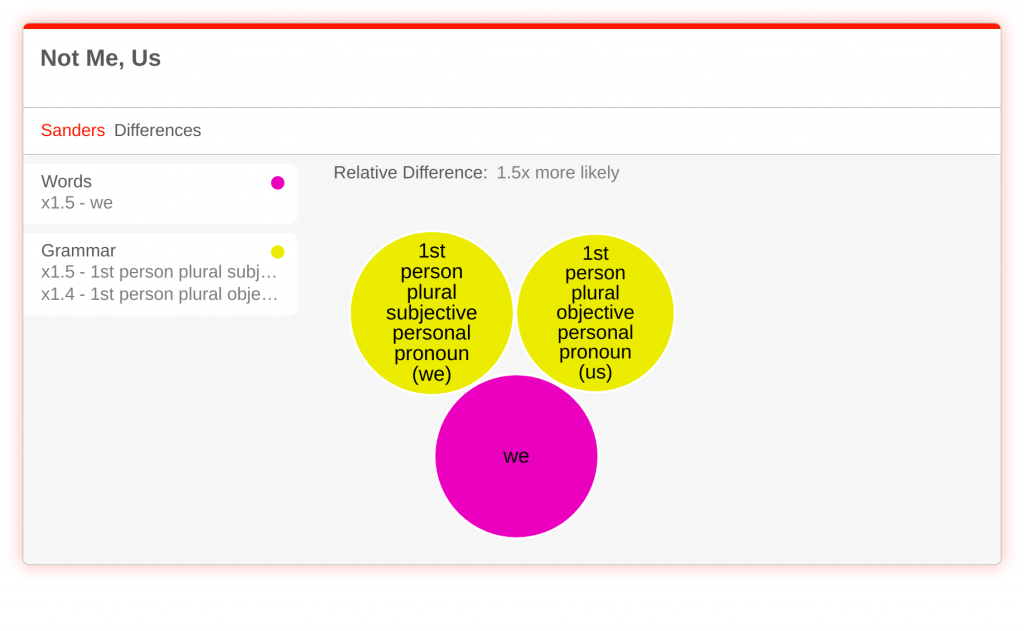 Another notable difference I discovered was that Bernie talks about the environment 3.4 times more than Joe does, which makes complete sense considering that Bernie heartily supports the Green New Deal. 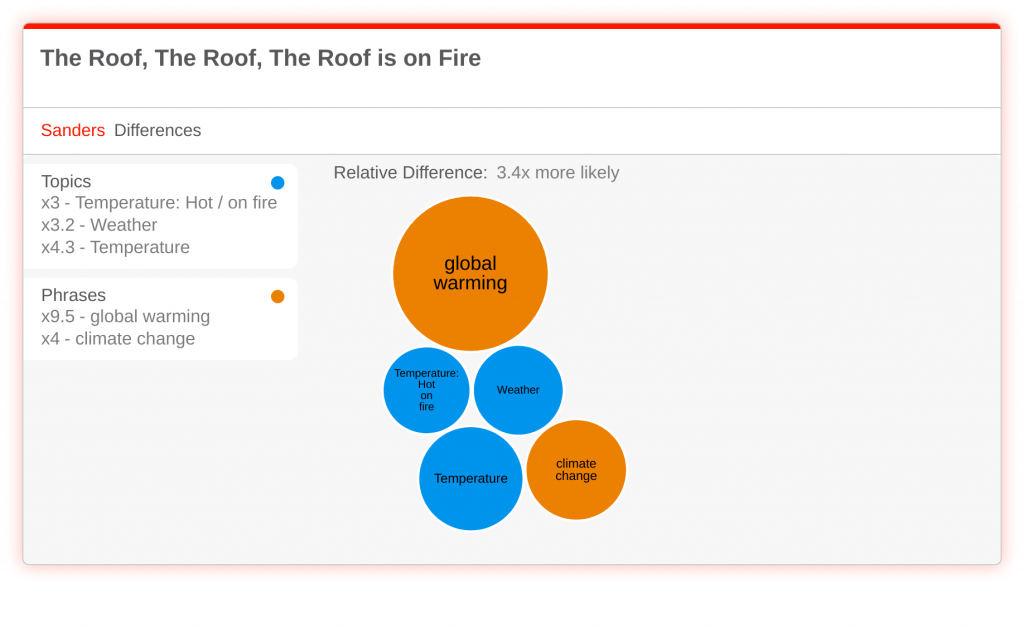 It’s Not What You Say, It’s How You Say It

A major difference between the ways Biden and Sanders talk was their overall tone, and the emotional language they used was quite different.

Sanders was 1.3 times more likely to use words with a negative feeling such as unspeakable, exacerbate, hate, and suffering. 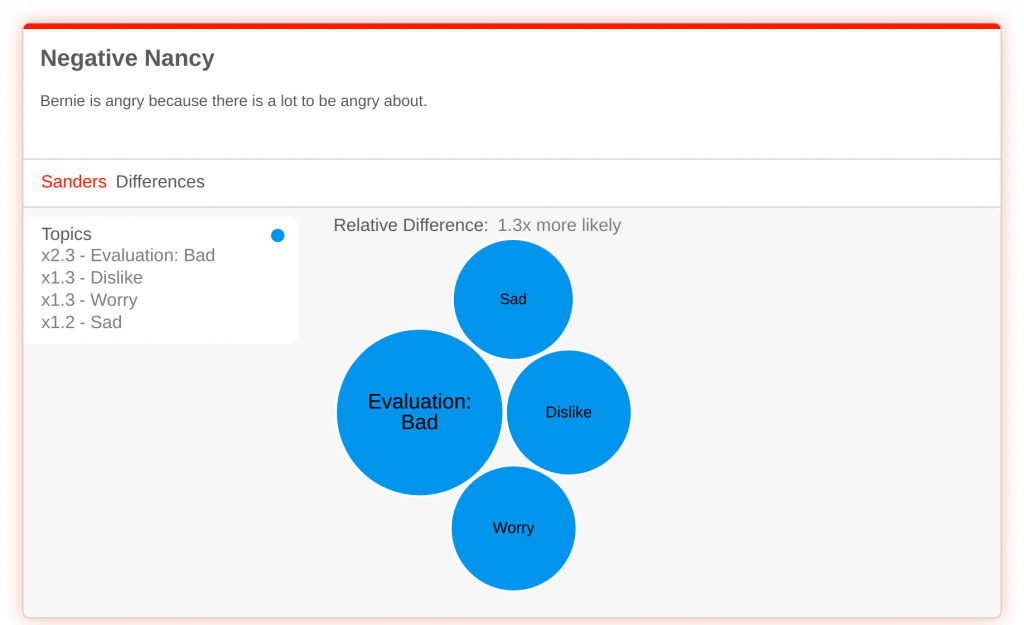 But Biden is much more optimistic. 1.5 times more optimistic to be exact, as he tends to use more words like delighted, confident, peaceful, and glad. 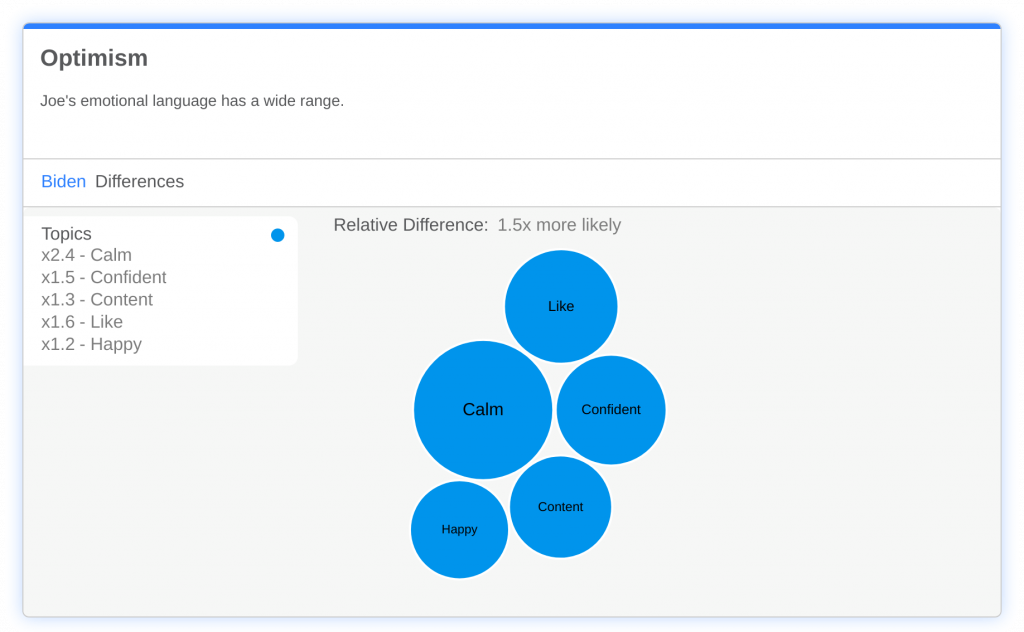 I can subjectively confirm that I agree with this tone. But, as a Sanders-supporting American, I can say that I believe that Sanders has a lot to be angry about whereas Biden is trying to convince everyone that the status quo is just fine.

Photo by Vidar Nordli-Mathisen on Unsplash