Competing COVID vaccines: Tracking the language around Pfizer vs. Moderna

I know the past months have felt like years and hope has been running low for a timely COVID vaccine. But I’ve got good news, it looks like the finish line might be a bit closer than we thought… Of the many competing pharmaceutical companies in the race to create a vaccine, BioNTech/Pfizer and Moderna have emerged as leaders, and the two pharma brands recently released promising initial Phase 3 trial results.

But with similar techniques and outcomes, we wanted to know what really separates the two competing vaccines, and how each are being marketed.

To find out, we ran some competitor analysis comparing information and results released in press releases for both Pfizer and Moderna. While these are only preliminary results – as we await a comprehensive clinical study – text analysis and competitor tracking can give us a glimpse into what’s to come.

Let’s start with the similarities

Both BioNTech/Pfizer and Moderna are telling us that their vaccines seem to work pretty darn well. Pfizer reported its vaccine is over 90% effective, and Moderna announced a rate of 94.5%. While exact percentages are slightly different, both Pfizer and Moderna were equally as likely to claim efficacy. The word ‘efficacy’ made up .2% of the words used by each company.

While that might sound small, remember there are over 171,000 words in the english language. For ‘efficacy’ to appear .2% of the time, that’s pretty significant.

Everyone has described COVID as novel or unprecedented, and Pfizer described its vaccine with similar language. The company was more likely to use words like ‘innovative’ or ‘unprecedented’ when referencing their own Research & Development program. 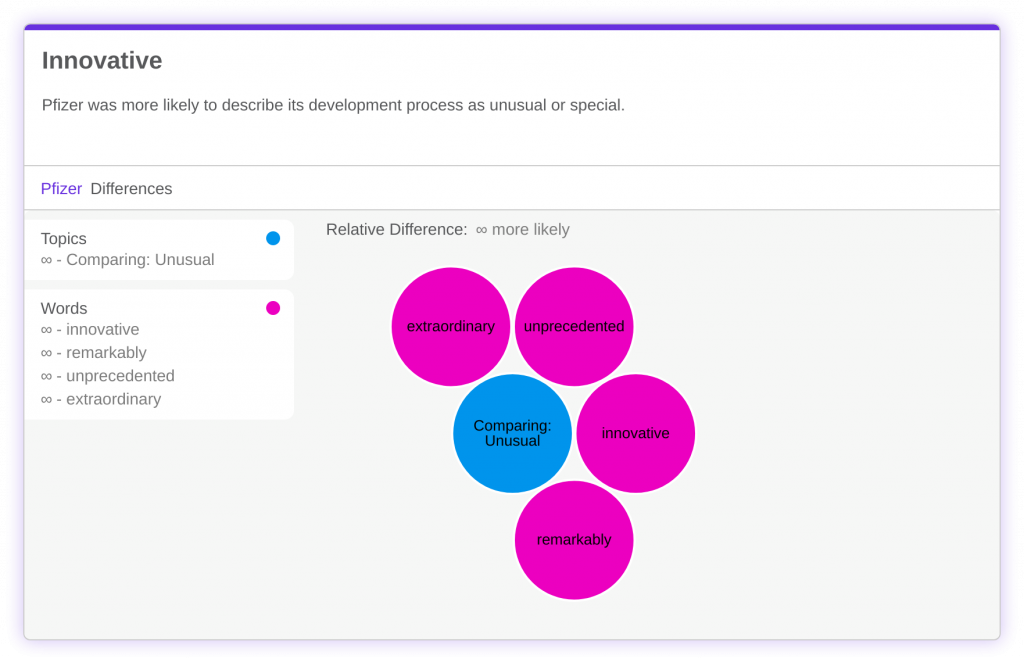 Pfizer was also more likely to use words implying inference or explanation. Words like ‘suggesting’ or ‘means’ are used infinitely more by Pfizer compared to Moderna. This suggests that Pfizer is creating more reader-friendly press releases through the explanation of statistics and technical jargon. 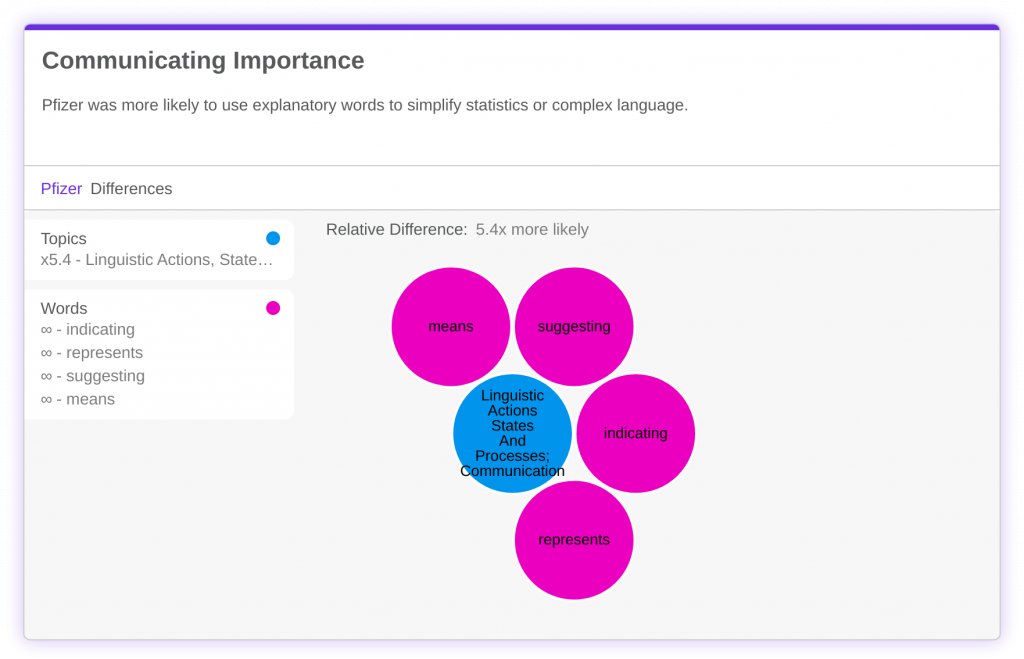 Beyond development, production is another factor that separates the two vaccines. BioNTech and Pfizer plan to produce up to 1.3 billion doses in 2021, and researchers weren’t shy about mentioning it. For context, Moderna estimates that it will produce anywhere from 500 million to 1 billion during the same period.

While both competing companies reported safe vaccines – with the exception of mild or moderate side effects – Moderna gave more detail. Press releases reported no serious ‘adverse’ events with the Moderna vaccine. Researchers went on to say standard aches or pains often associated with vaccines were only seen in 4-9% of patients. 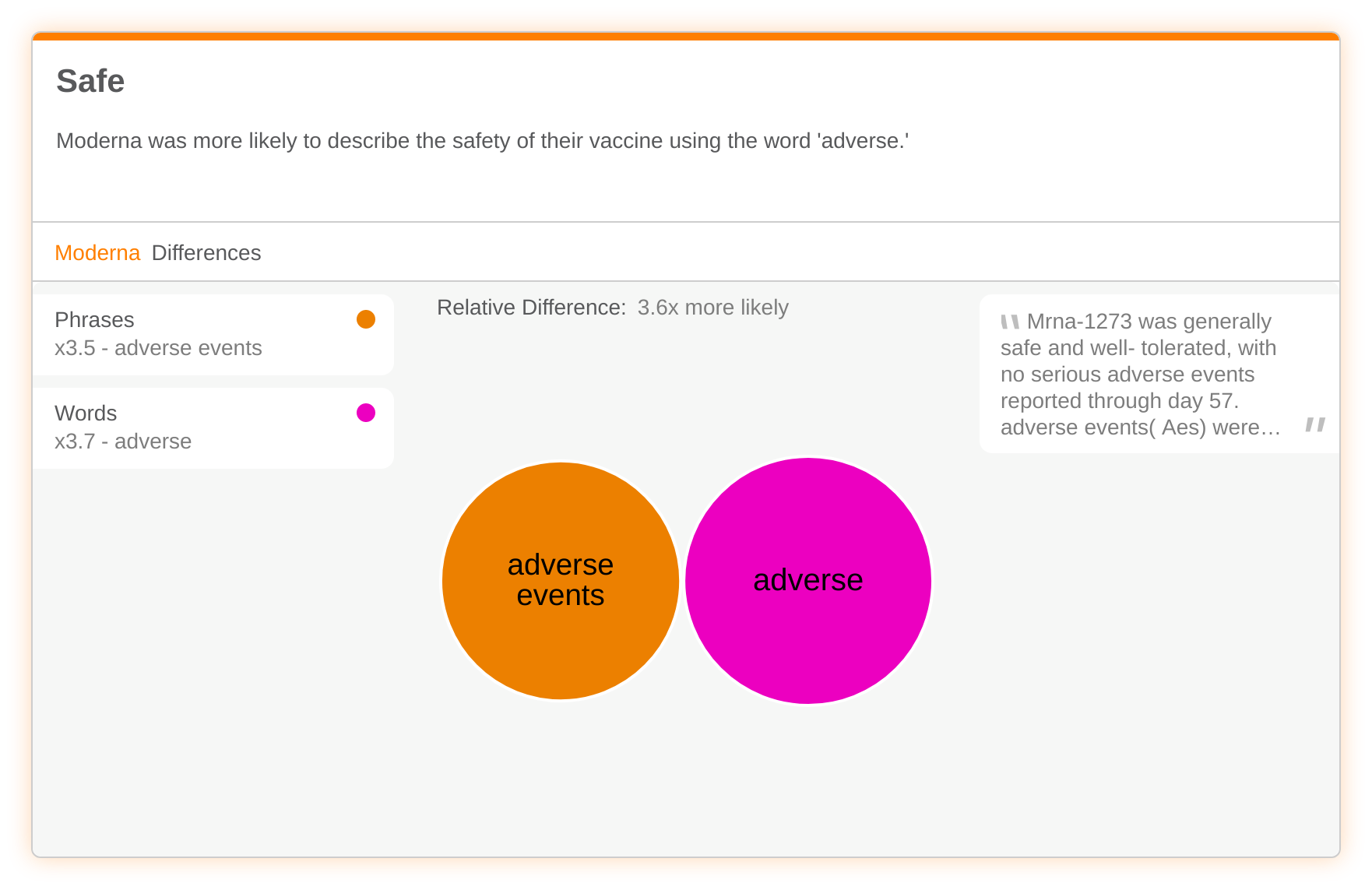 Moderna was also more likely to discuss the speed at which they have tackled vaccine research. The company used words like ‘fast’ or ‘accelerate’ to describe the drug development process. Researchers also referenced Operation Warp Speed – a government initiative to expedite the development of a COVID vaccine. 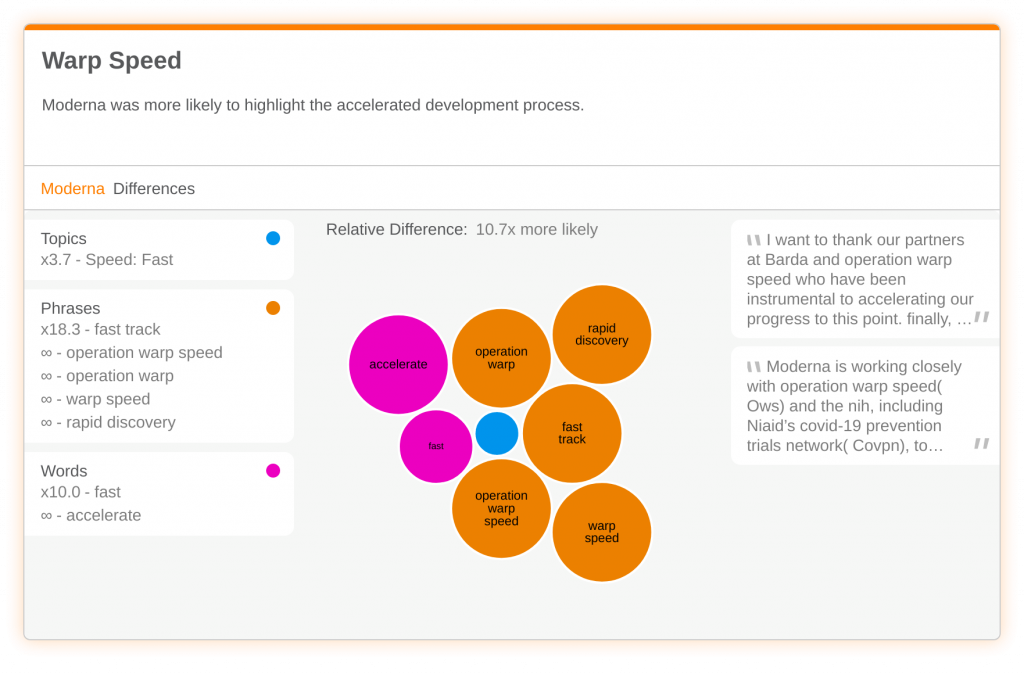 Another element of a successful vaccine is storage. Moderna was more likely to discuss this challenge, using words like ‘temperature’ and ‘storage’. Moderna’s vaccine can be stored in a common refrigerator at the temperature of 2-8 degrees Celsius for up to 30 days. Long term, the vaccine can be stored for up to six months at standard freezer temps of -20 Celsius. Pfizer’s drug on the other hand, requires a special freezer that can reach -70 Celsius. 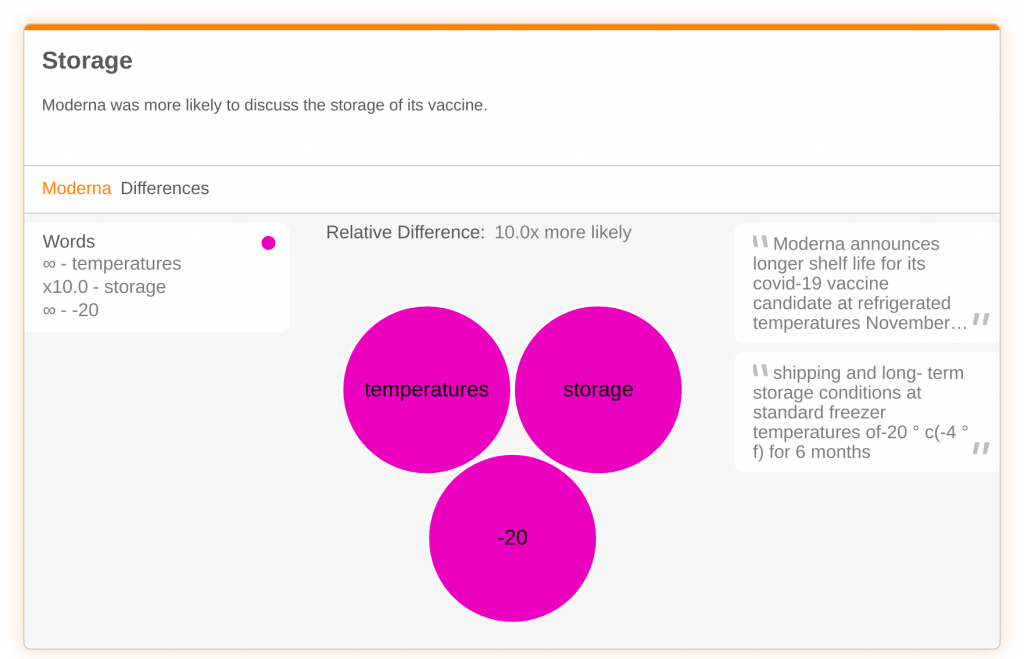 Relative Insight can be used as a sophisticated tool for competitor tracking. In this case, we can see how the competing COVID vaccines stack up against each other and how each are being marketed.

What makes Olivia Rodrigo so relatable?

The vaccine rivalry: Analyzing reported symptoms for each brand

How coronavirus has impacted charitable donations