As someone who was an avid (pre-coronavirus) concert goer, gigs are one of the top things I miss as this pandemic drags on. When news broke a few weeks ago that an actual Chainsmokers concert happened in New York, I was shocked. I have so many questions: ‘You can have a concert right now?‘ ‘How?‘, ‘Why?‘

So naturally, as any Twitter obsessed person would do, I scrolled through the tweets commenting on the absurdity of what had happened and saw many of the same questions being echoed. Obviously in a more entertaining, extreme, and polarizing way as you’d expect, the regular doomsday scrolling stuff.

But it got me thinking, if I’m seeing my reactions echoed in a larger space, is this indicative of larger trends? I wanted to know how do people feel these days about the restrictions on going to different places – let alone live events, as some of the world starts to ease up?

So I collected all of the tweets commenting on The Chainsmokers’ event and put all this language data in Relative Insight’s text analysis platform for some good old comparison.

Was it worth it?

People heavily questioned whether going to a live event in the current climate is actually worth the risk – I noticed a lot of people making the point that attending a gig is essentially making a decision to willingly be exposed to coronavirus in a way you otherwise wouldn’t. 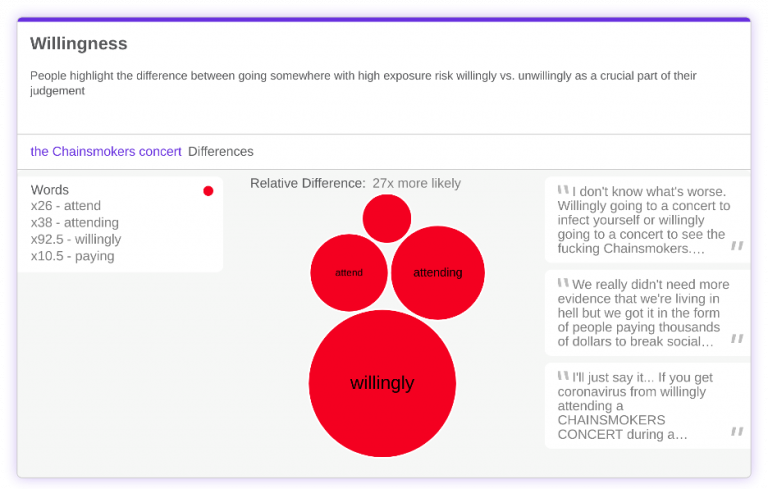 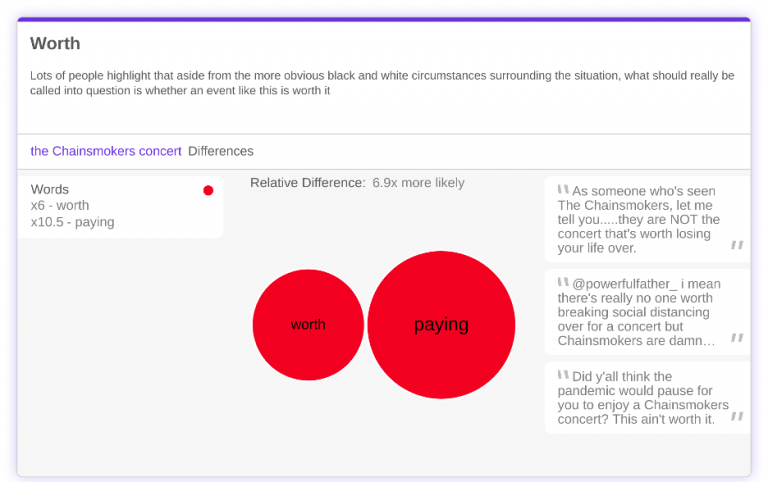 Americans are famously (or infamously) known for their fierce sense of individualism, but as COVID has reared its deadly head, it’s become clearer that this ideal, fully manifested, is not always positive. Actually, most would say it’s very detrimental to be able to track COVID’s spread through certain practices of not wearing a mask, and not social distancing, which seemingly limits your personal choices for the better of others. 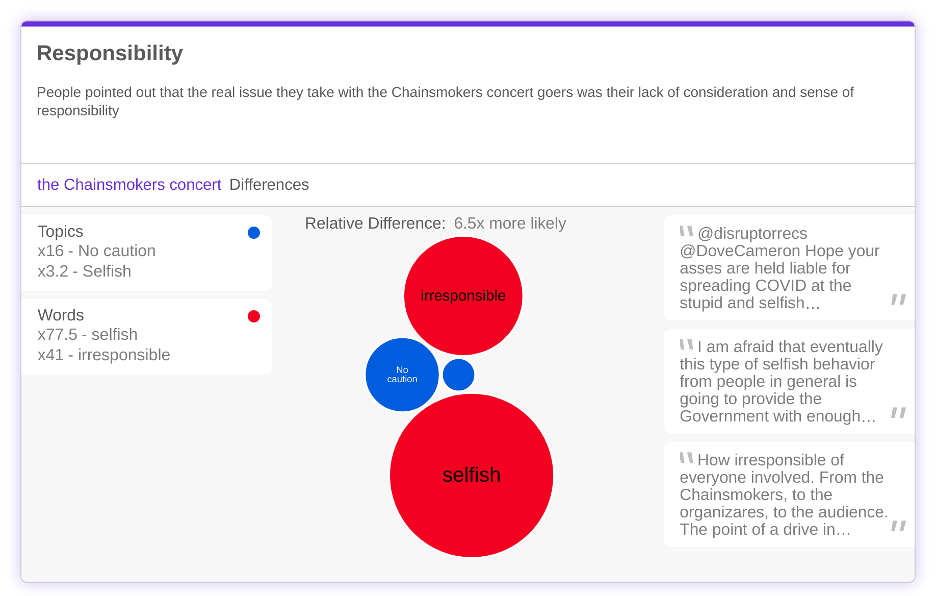 This is manifested in the conversation point of “responsibility” that many brought up in reaction to the Chainsmokers concert. I believe it is indicative of a greater conversation around America’s reckoning with its problem of ‘individualism is king’ and people’s inability to give it up in situations where the merits of collectivism outweigh it.

A focus on consequences

There was, unsurprisingly, lots of extreme language around consequences of those who attended the concert. Specifically, language around death as a likely consequence, or attendees ‘deserving’ to get COVID was prolific. This seems indicative of heightened awareness of consequences these days, especially around decisions that don’t seem carefully considered or done with empathy. 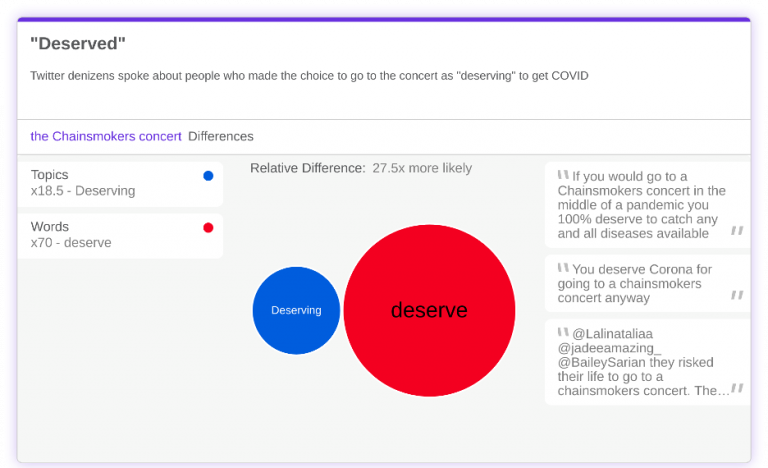 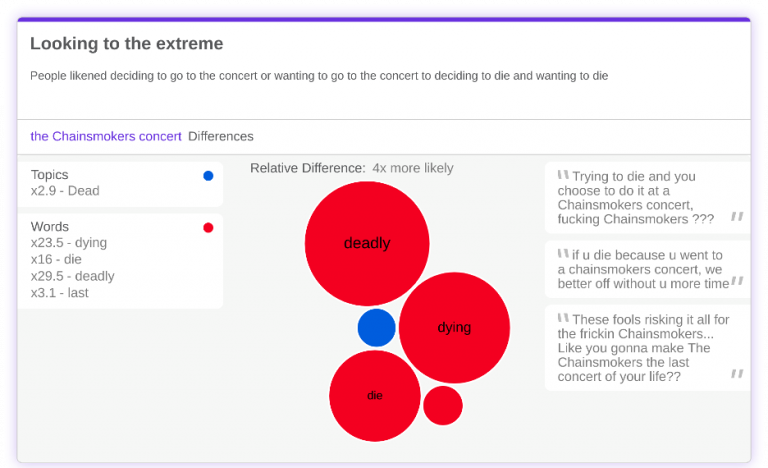 Something that might be playing out on a larger level here is actually an examination of people’s abilities to have empathy. On one hand, there seems to be a strong idea that people do not have empathy for others when they make decisions for themselves during a time when having consideration for other people is crucial.

Another side to the subject about empathy is looking at conversations about people who decided to go – people seem unable to empathize with them, they talk a lot about why someone would want to go to a concert, and whether or not they actually did consider the decision thoughtfully before deciding to go.

People wonder if these attendees were sold the concert as a very safe environment where social distancing would be adhered to, and it would just be a listening experience, but live and from their car? Did they possibly decide to go but with the intention of then quarantining after the concert, so not to expose those they live and interact with?

It seems to me that this conversation which is really about empathy, may be less well-rounded than we’d all like to think, judging from tweeters’ lack of ability to imagine the thought process of attendees and their labelling of those who attended as ‘high risk’. 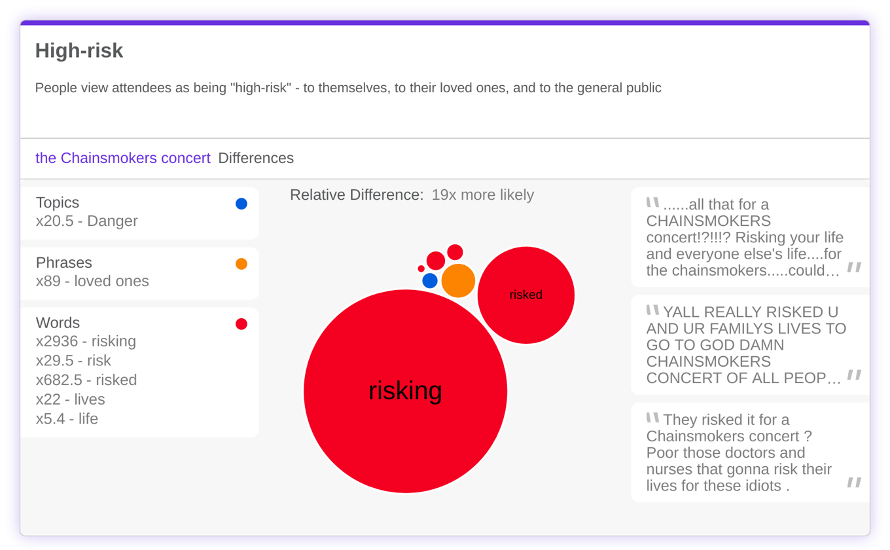 This discussion around those people who risked exposure to coronavirus is made even clearer when people started comparing the attendance of people at the Chainsmokers concert, to those who went on the BLM protests. 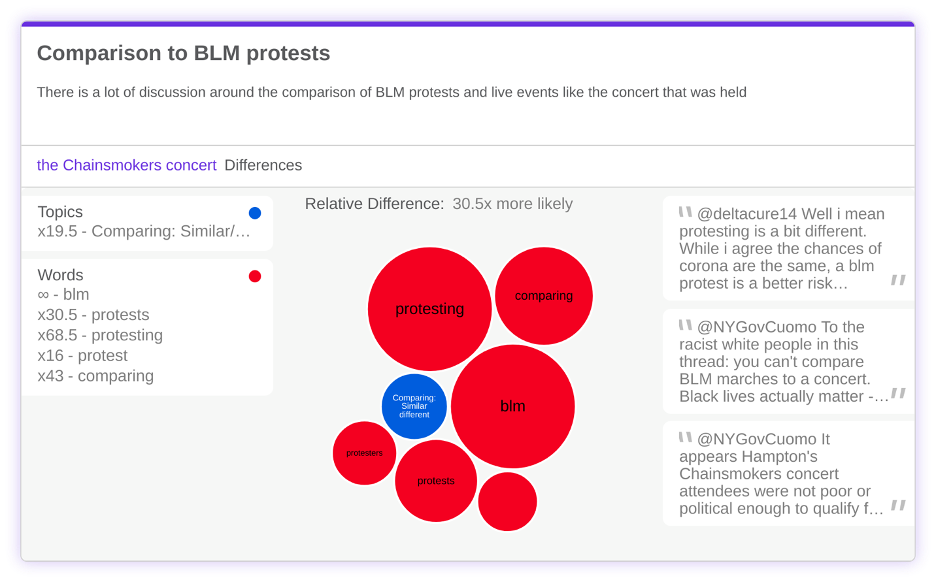 Obviously this discussion is not an easy one to have when so much about “worth” is subjective and based on values, which in America is diverse to say the least. But it is also clearly something that is crucial during this time, when as we work as a society to alleviate a virus that is affecting us all.

By analysing this online conversation, I found that one thing’s for certain, which is that commentators all thought this event happened far too soon – or its execution was done poorly – without strict adherence to social distancing, masks, and other advertised precautions. 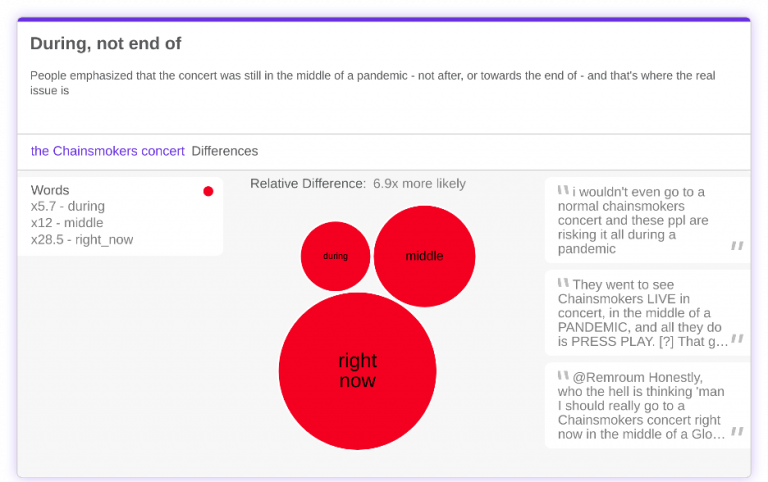 While this kind of event may have been unnoteworthy pre-coronavirus, it has become something that a good number of people find truly absurd.

“The new normal” as many have predicted, seems to already be here and this event is the perfect example of the absurdity of our former “normal.”

Relative Insight can analyse data from any language asset you can imagine. It could be anything from social media to surveys, to podcast transcripts to customer service call transcripts – the world’s your oyster!