Comparing Xbox and PS5 reactions to the launch events

With E3 cancelled because of the you-know-what, the games industry has had to adapt to show off their new consoles and games.

Over the past months, two titans of the infamous console wars, Sony and Microsoft, decided to platform their own online events similar to the press conferences they would have given at E3 – so I was interested to see how gamers reacted from both communities to the two events, then see who fared better.

This form of social media competitor analysis will uncover the differences in how consumers discuss each brand and what they value in a gaming console.

Sony’s PlayStation 5 event revolved around unveiling the new console as well as showcasing all the new games they are publishing. Microsoft’s event on the other hand was penned as the “Xbox Game Showcase” focussing on the new releases of games as their console had already been unveiled in March.

What did people think of the console?

PS5 reactions centered around design input. We can see straight away that overall gamers watching the PS5 event were 5.9x more likely to talk about colours and twice as likely to talk about the shape of the new console, which was exactly the kind of conversation this event was designed to spark.

However, many people did not actually like the new look and direction that Sony were taking with the PS5, calling it ugly. The word black is used 13x more by the commentators of this event which is interesting as the console is mostly white. Looking further into this I found that people are hoping that a black version will come out in order to be more in line with the classic PlayStation feel that PlayStation owners have been used to since the PS2. 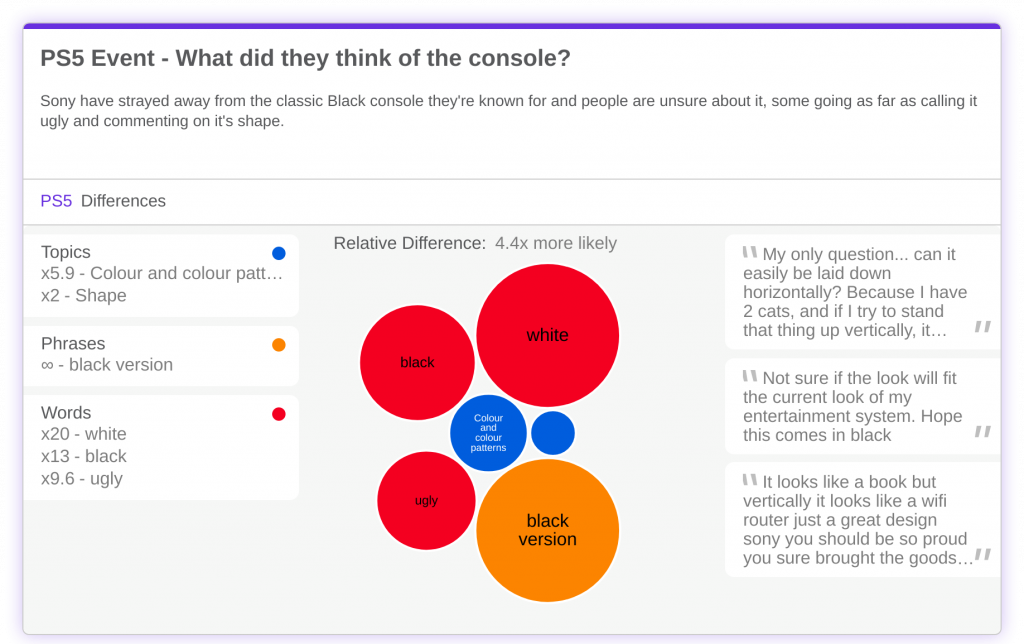 PS5 reactions were more likely to mention ray tracing. It sounds like a buzzword that’s just used to get people excited about the graphics of the new generation console and it is, but that doesn’t mean it doesn’t deliver. Essentially ray tracing is a way to simulate light in 3D environments to create more life-like real-world effects and watchers of the PS5 event were all about it. Ray traced was used 28.5x more in these conversations while the phrase Full ray tracing was never even mentioned by their Xbox event counterparts which is evidence enough that it is not a big deal for Sony. 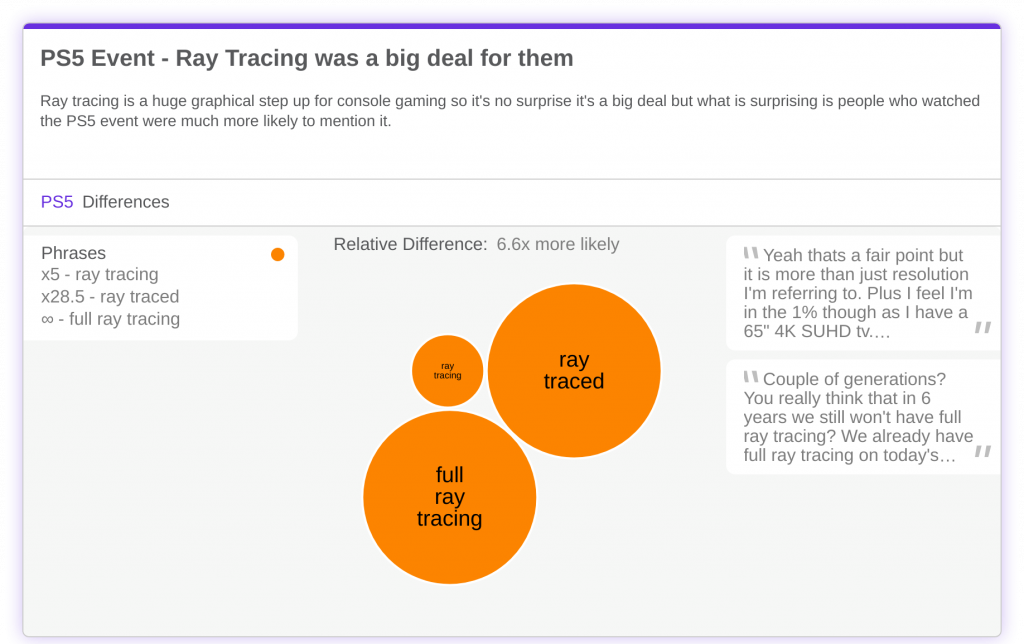 So, what was the verdict for Sony?

Overall conversation around this event was pretty positive – which is a huge win in the gaming industry as gamers are notoriously a fickle breed (!), but the standout topic was bravery used 16.5x more – which in this context this was mostly conversation around Sony breaking the mould with the new design console.

Words and phrases relating to shock also made up a large amount of conversation around the new design of the console. Like is the other big emotional topic used 2x more here, than from those watching the Xbox event, and this shows us conversation around their favourite aspects and what they enjoyed during the show. 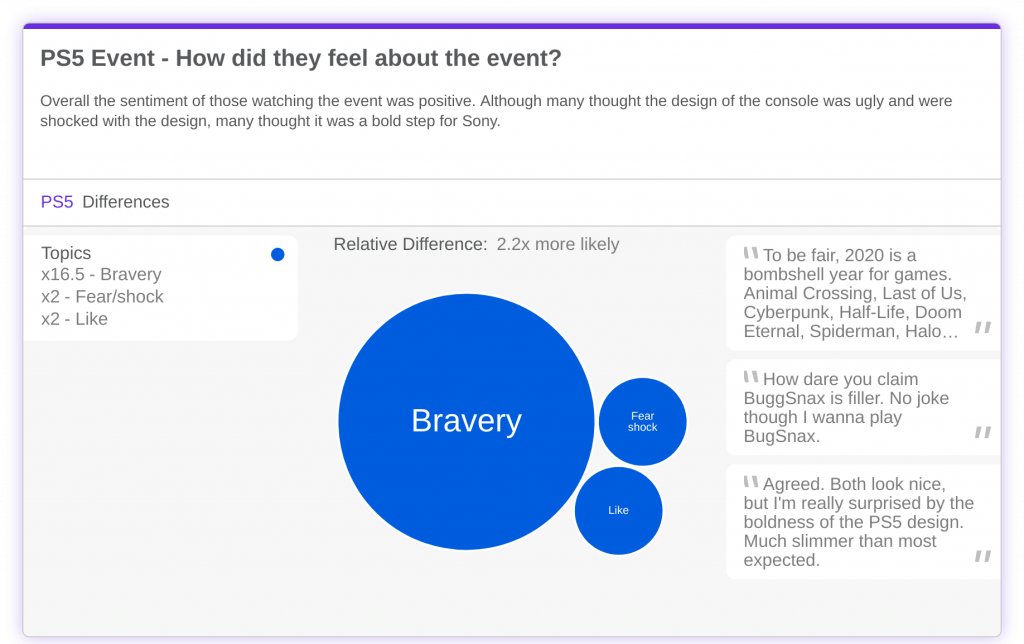 As discussed, the Xbox event was all about the games coming to the new Xbox Series X, and included in the show were games that would also be multi-platform titles, meaning that they would also show up on the shelves for the new PS5. When we come to look at the word differences, the top words and phrases for Xbox are specific game titles whereas those watching the PS5 event didn’t really talk about games at all.

These insights really highlight the fact that both events seem to have been successful in encouraging their fans to talk about the USP of each event. However, exploring more into what people thought about these games is a different story. The lack of gameplay and quality of graphics seemed to really upset and disappoint some fans which is not a great start. 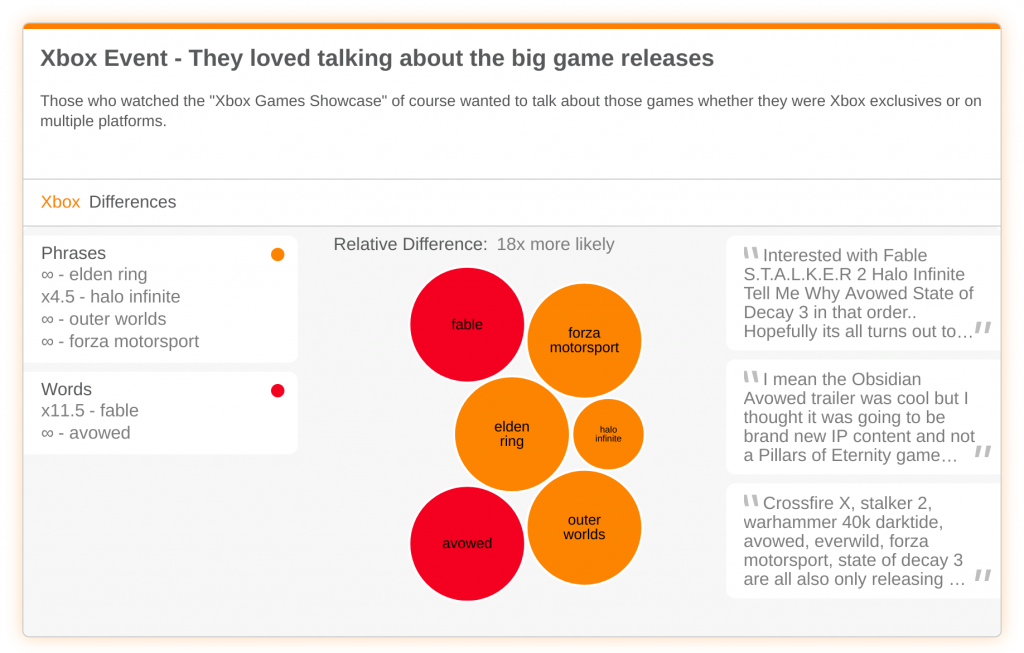 One particularly interesting insight that I discovered in this analysis of the two events is that those watching the Xbox event were 1.7x more likely to use the collective pronoun we to refer to themselves within a community than those watching the PlayStation event. This arguably shows that these gamers feel connected, and being in the Xbox crowd is a big part of their personal identity. 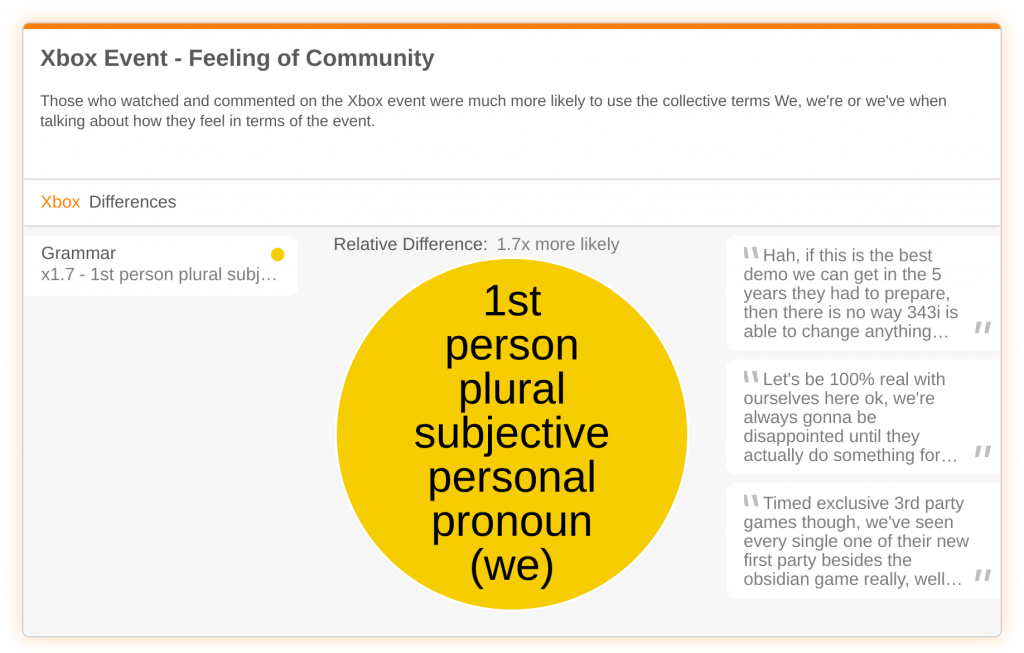 How was the event received overall?

Well, not great. These fans reaction was was much more negative when compared to Sony’s. The two big emotional topics that sprang forward were discontent, violent and angry (see, I told you these guys could be fickle!) being used 1.9x and 1.4x more than the PS5 event respectively. Watchers commented on the event and talked about games as disappointing and felt letdown by the quality of the games. They also felt that the speaker lineup, including Phil Spencer, Xbox CEO, was annoying. 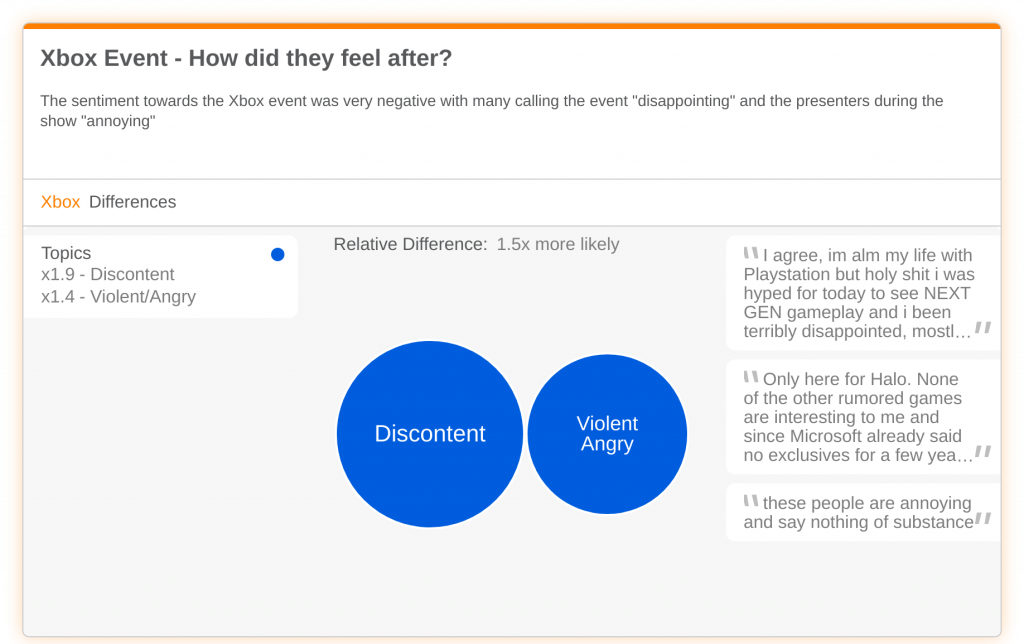 And the winner is…

After analyzing Xbox and PS5 reactions, it’s clear Sony wins this round! Although the new console design came with some dismay, I think that people will get over it, but they may have some work to do to get people more excited about their new games. Xbox are in a similar boat. Yes, they got people talking about their games, but it seems like for the wrong reasons – and I’m sure that as more gameplay becomes available for their hotly anticipated games (Halo Infinite and Fable, for sure!) they will turn it around.

Social media competitor analysis demonstrates the strengths and weaknesses of two brand in the eyes of the consumer. Knowing where you stand in among competitors on social media is crucial in becoming an industry leader.

The real winner will be decided during the “2020 holiday season” and beyond, and I for one, can’t wait.