For those that used to ride public transportation in the BC (Before Covid) era, you might quickly find yourself annoyed with having to drive yourself places as reading, meditating, or doing work on your journey is no longer an option.

Head constantly on a swivel and praying the person changing lanes sees you – or screaming at them when they don’t seize the freaking gap, as if the rest of our lives don’t cause enough anxiety! Lucky for us, humans much smarter than me at companies like Tesla and Waymo are working to solve the problem.

Aside from teleporting and flying, driving is the next most efficient option to get where we want to go, since trains here in the US are bound to their tracks and are outdated compared to rail networks in other developed countries. Moore’s Law states that computing power doubles every two years, though the cost is halved, and so I thought that comparing Waymo and Tesla’s autonomous driving projects from 2018 to now would be an interesting way to learn more about the two companies, while also testing this Moore guy.

Considering the first scenario of Tesla vs Waymo, I came to find that Elon and his executives do a lot of the blog writing. In fact, Tesla’s content is 7.5x more likely to come from a first-person point of view. 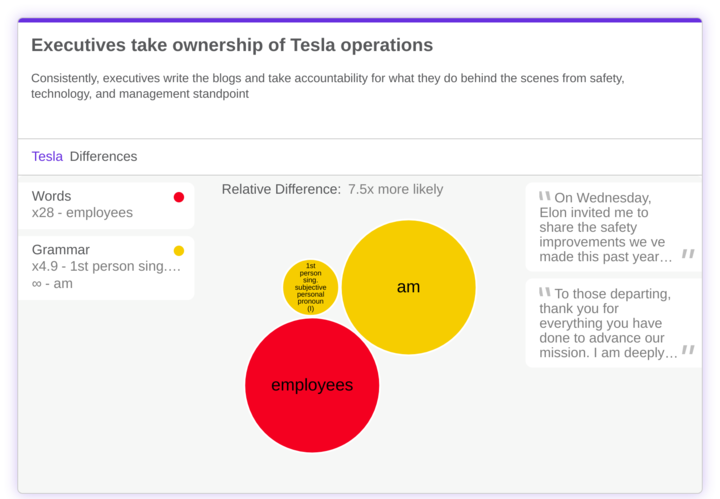 But it’s not all me, me, me as Tesla is 28x more like to address “employees” than Waymo.

Interestingly enough, Waymo comes at their blogs with a united front by taking ownership as a team and holding teams accountable vs him/herself or other individuals. 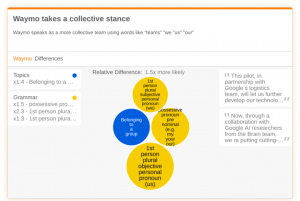 The biggest takeaway from the comparison here was Waymo’s language around the technology itself. They do an incredible job of talking about the R&D that goes into their vehicles. 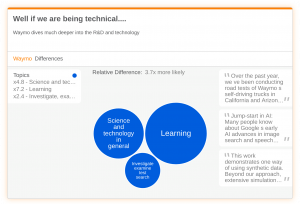 By contrast, Tesla talks much more about the cool gadgets and gizmos such as the charging and acceleration speed. It seems that Tesla is not only far more likely to use the phrase “sustainable energy” and “electric vehicle”, but Waymo doesn’t use either phrase once. 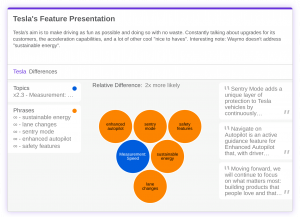 It’s also interesting to note that Tesla users are referred to as “customers” where Waymo refers to theirs as “riders.” I think this subtle difference holds the key to the rest, as being a customer means making a personal investment. Musk and team hold you accountable like they hold themselves accountable.

However, Waymo’s use of the word ‘rider’ also seems to align nicely with the rest of their messaging – because while they discuss the hard science-stuff they do behind-the-scenes, they are also addressing their internal teams and external audience with a “we’re all in this together” mentality.

This said, it’s going to take more than some nice marketing language to convince me to trust self driving cars.

Technology is getting safer

Looking at Tesla and Waymo’s content year-on-year is a better way to understand how the technology is trending. This second scenario compares the comms coming out of both companies from 2018 and 2019 to present day. It’s good to see that although 2018 content was full of language around crashes, injuries, and damage, there is significantly less of this since 2019 – a great indication that the technology is becoming safer. 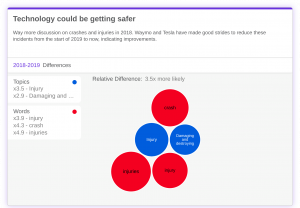 And now that it seems like both companies have increased safety standards, they are similarly doing all they can to tell you about how in-depth the tech is, and how awesome autonomous driving can be. Distance of battery life, sensors used to help machine learning, augmentation data, and design are a few hot topics. 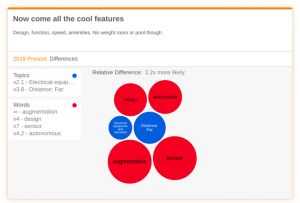 It’s interesting to see how Tesla and Waymo are approaching safety. Driving is dangerous, but people need to get places. People need to get places, but people don’t want to drive.  Waymo looks to provide services to drivers who don’t want to own a car, or can’t afford to – but do want to reduce their carbon footprint. Tesla empowers drivers to have a blast in their own car while reducing their carbon footprint.

Looking at the two year span, it seems as the issue of safety subsides, the companies are moving more towards talking about functionality and efficiency. Full-autonomous driving is still quite expensive and has some flaws, so until we see where Moore’s Law and technology takes us these next two years, can I suggest walking or riding your bike?

How to write a product description that stands out

How US tourism marketing differs by state

How do PR agencies convey value throughout their communications?