Comparing the people vs the critics for Don’t Look Up

The critical eye and consumer eye view entertainment through a different lens – and while the average moviegoer might love a film, the professional critic might pick holes in it and give it a lowly C rating. These ratings relay a general indication of a film’s quality, but not much else. The words that appear in reviews tell the real story.

Based solely on average ratings, we can see that consumers rated Don’t Look Up, the satirical sci-fi Netflix movie much higher than critics did, but what are they really saying? What do reviews tell us about this controversial movie? We pulled US and UK reviews, and compared professional opinions against consumer thoughts to find out.

Relative Insight analyzes all these words. By comparing two sets of written data – ie. critic reviews vs. consumer reviews – the platform uncovers the differences in how those two groups speak. This technique adds an additional layer of context, in turn weeding out universal language we would expect to see from both groups.

When we analyzed consumer reviews, we found that they were more likely to respond positively to the film compared to critics. They used the words good, great, amazing, entertaining, enjoyed, brilliant and loved. Moviegoers preceded these opinions with the phrase I think and I thought. 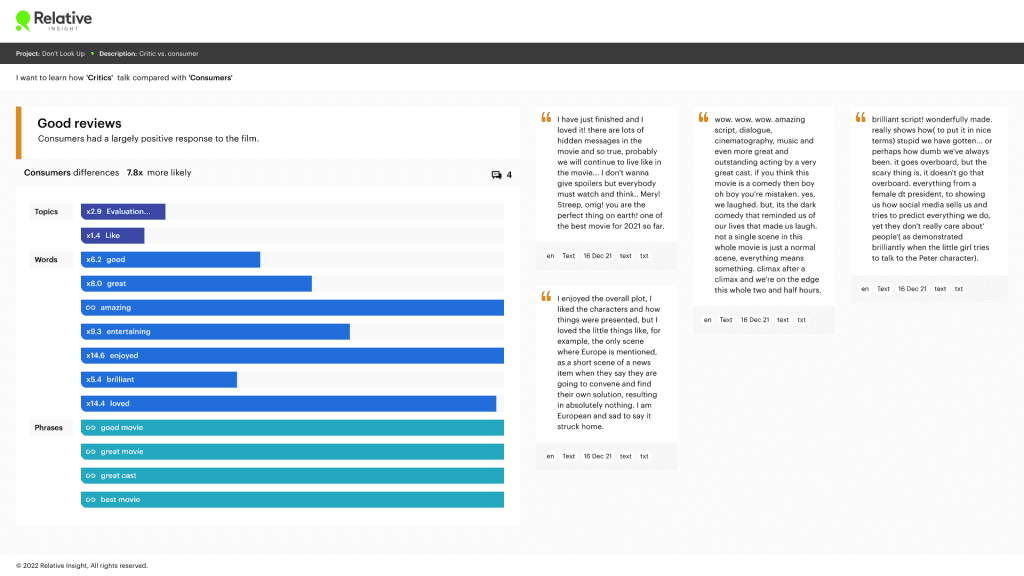 Although most reviews included these positive sentiments, a sect of viewers disliked the movie for one particular reason. These politically right-leaning reviewers saw the film as propaganda, lies and misinformation. They felt as though climate change is not equivalent to a doomsday comet.

The acting in Don’t Look Up received the most praise from viewers compared to the critics. Moviegoers used the words acting, cast and actors more than the professional reviewers. With Leonardo DiCaprio and Jennifer Lawrence making upwards of $25 million each, splurging on big names paid off in the eyes of viewers.

One criticism we saw frequently from critics was rooted in a single word: toothless. Multiple reviewers used the word to describe their attitudes toward the film. Through satire, the movie criticized the world’s response – or lack thereof – to the threat of climate change. Critics felt as though the writers and directors didn’t address this parallel straight on, and the film neglected to result in any actual impact.

Critics framed their opinions through the use of literary techniques. They were more likely to use the words tone, metaphor, allegorical and parable. Professional criticisms detailed the movie through descriptive words in order to substantiate their opinions.

Critics positioned their opinions as feelings. They were more likely to write it feels as opposed to I think, which we saw from consumers. Both phrases can be used to position an opinion, but critics were less likely to write in the first person.

Professional critics and the average moviegoer want and expect different things out of a cinematic experience. Analyzing consumer reviews demonstrates that critics seek deeper themes and high quality storytelling – while consumers want entertainment value and to see their favorite actors on screen.

To learn more about consumer and audience insights, register for the next installment of our Spotlight Series webinar event “Let me entertain you: Who the hell are your viewers, players & fans anyway?”

How do reviews of TV shows with diverse casting compare to those without?