Analysing social: Is it too early for Christmas decorations? 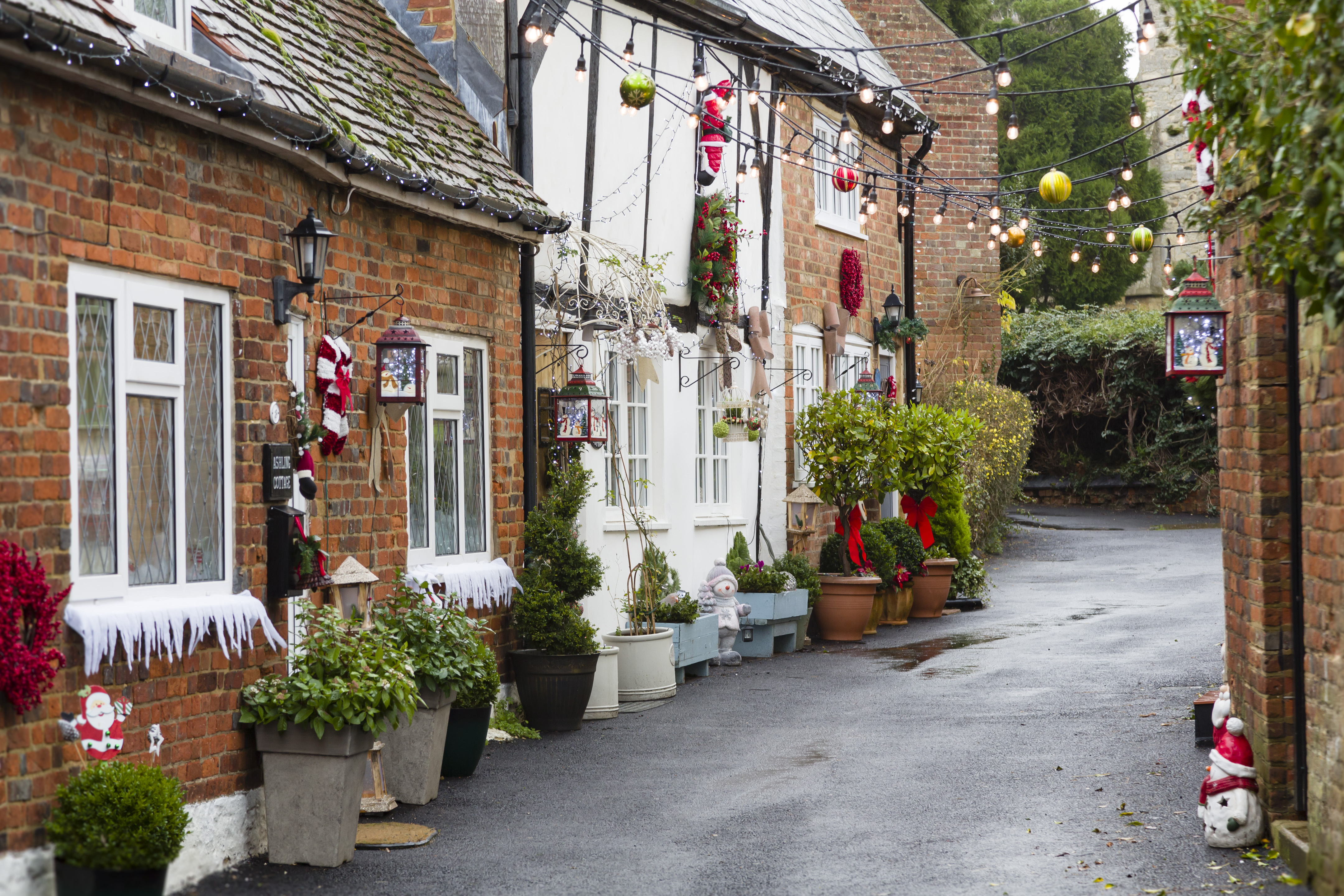 With socially distanced Halloween and Bonfire Night ‘celebrations’ over, the gloomy weeks of waiting for a Christmas that may or may not happen has arrived. And, after the year we’ve had, some people can’t wait to start spreading festive cheer. So, will you be a Scrooge when your neighbour proudly displays their Christmas decorations mid-November, or will you be joining in?

To understand how the conversation around Christmas decorations has changed this year, we compared Tweets from 2019 to 2020. Using Relative Insight’s platform, we analysed social insights to discover words, phrases and topics that were unique to each data set, helping us to better understand the sentiment around Christmas this year.

A Pre-COVID Christmas
In a pre-coronavirus age, groups gathered across the nation to marvel as special guests illuminated their town with sparkling Christmas decorations. We celebrated the beginning of holiday festivities, dancing to live (yes live) music. Sound like a dream? Not quite – it was the 2019 Christmas Lights Switch On, and the talk of Twitter this time last year. 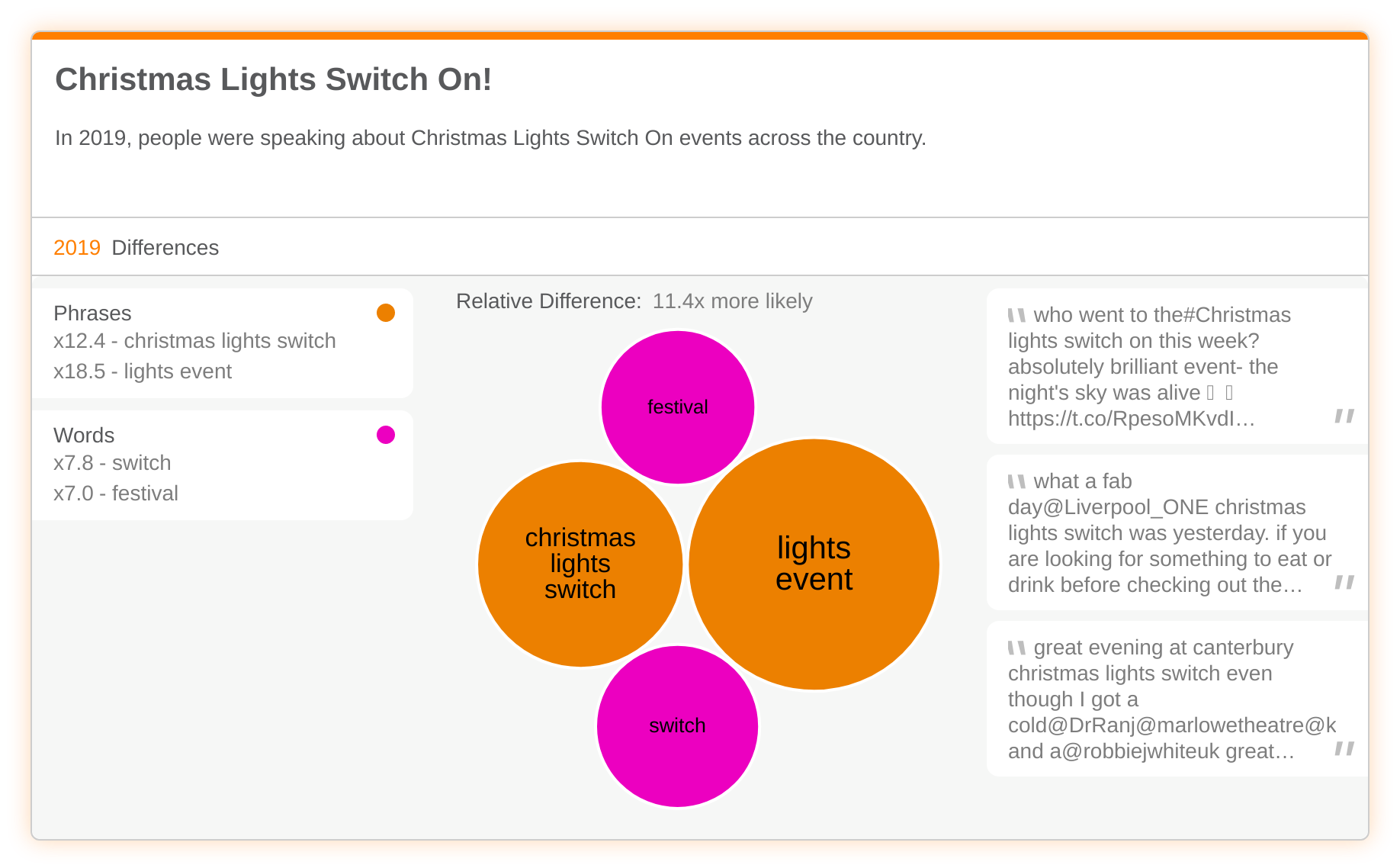 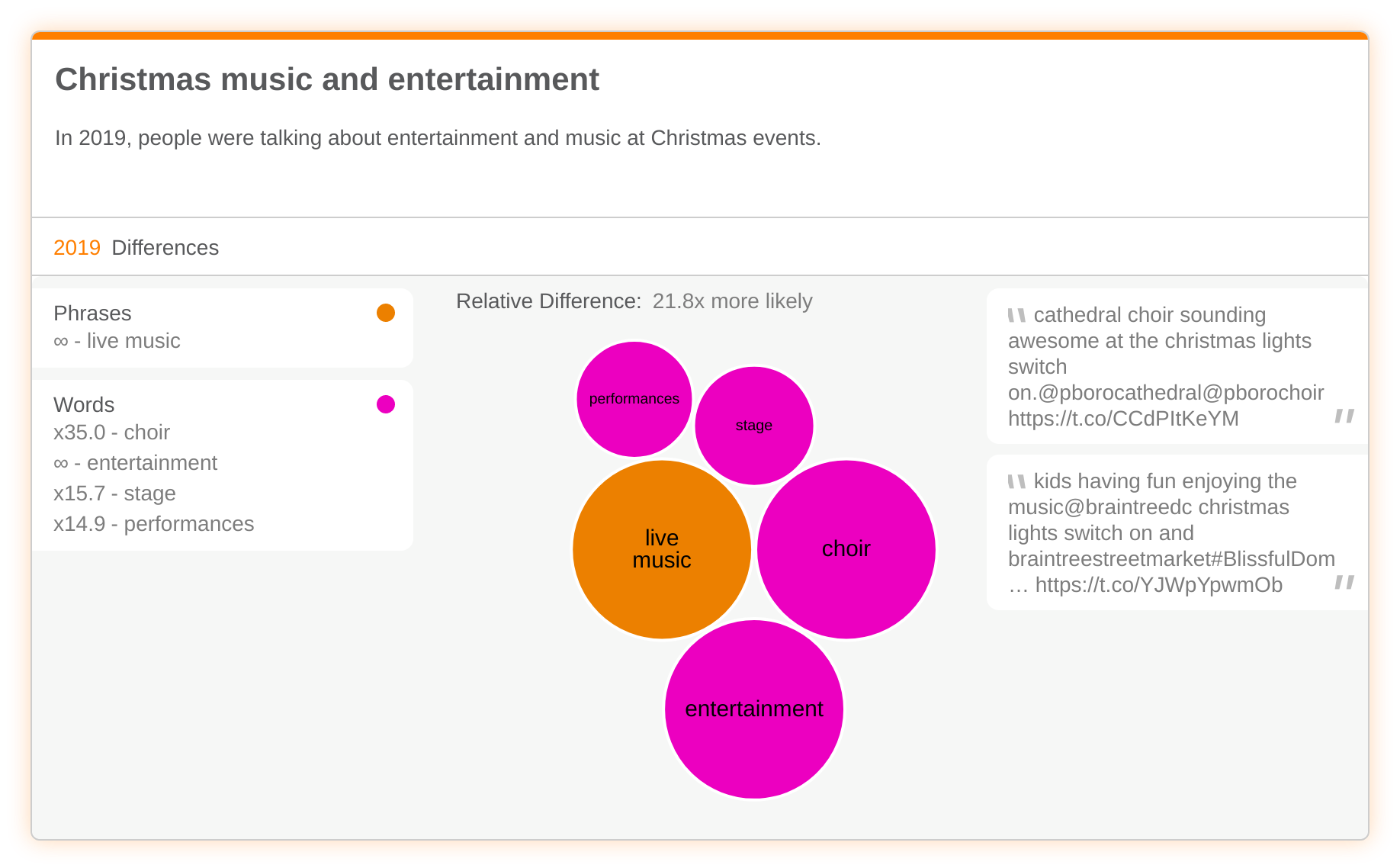 Officially Christmas
But when does Christmas actually begin? Twitter users were 2.4x more likely to declare it was ‘officially’ Christmas between 10th and 16th November in 2019, when compared to the same period this year. It seems that Christmas Light Switch Ons marked the countdown to Christmas, making it officially acceptable to sing Christmas songs. 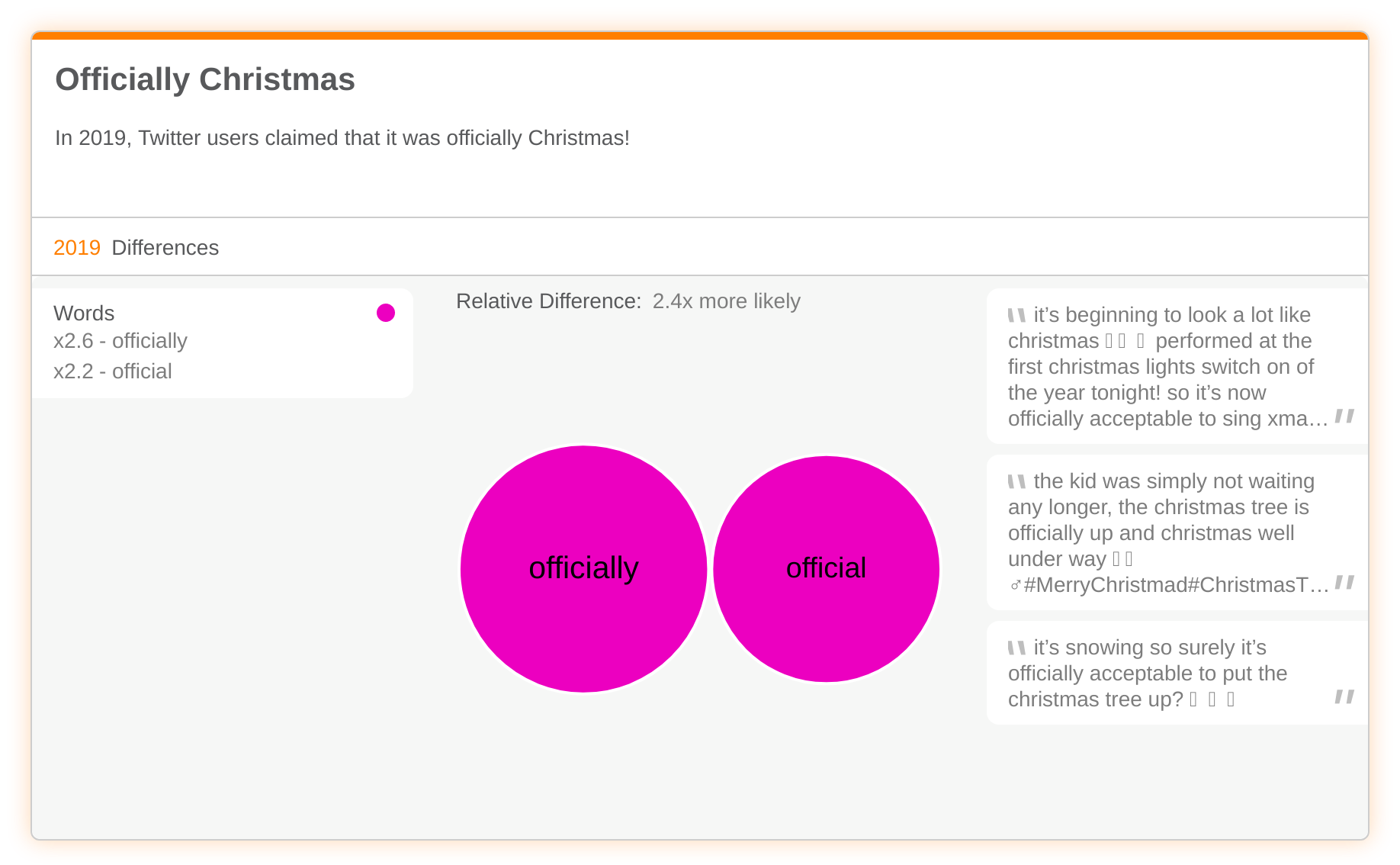 Neighbourhoods coming together
In 2019, crowds gathered – a rare image in 2020. However, lockdown and social distancing isn’t stopping people from coming together this year, albeit in a different way. This year, Twitter users were 5.5x more likely to refer to their ‘neighbourhood’ and ‘neighbours’ decorations, which perhaps can be down to the fact that coronavirus street parties, clap for the carers, and doorstep celebrations has encouraged a greater sense of local community than ever before. It seems that people are more interested in their neighbours than they were last year, perhaps because they’ve spent months bonding with them. 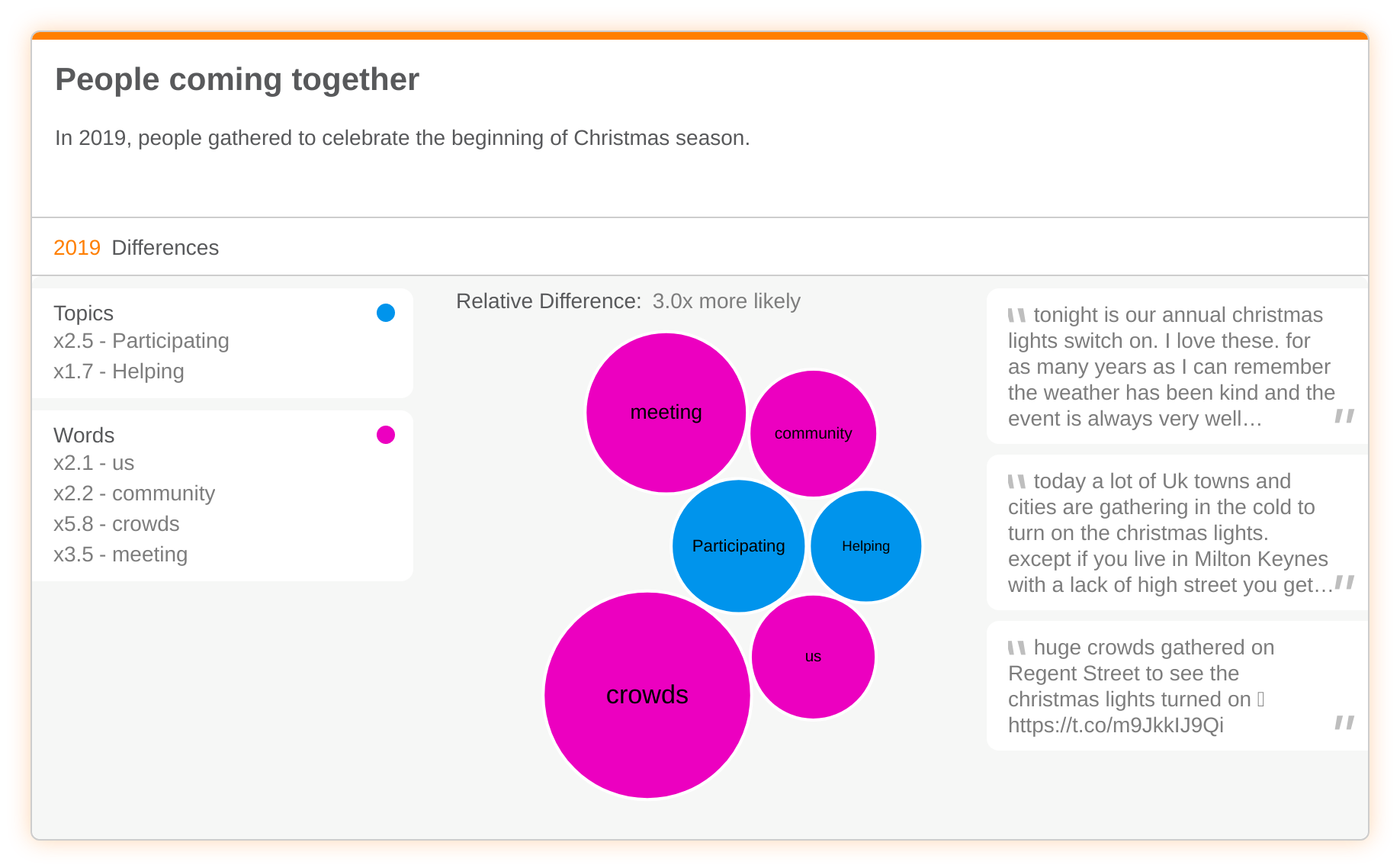 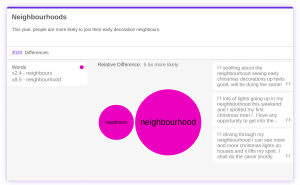 The new normal
Any other year, we would agree, November seems a bit keen for Christmas decorations. But as our fellow Twitter users conclude, this year is far from normal. People have changed many of their behaviours this year, and prematurely putting up the Christmas decorations makes the list too! 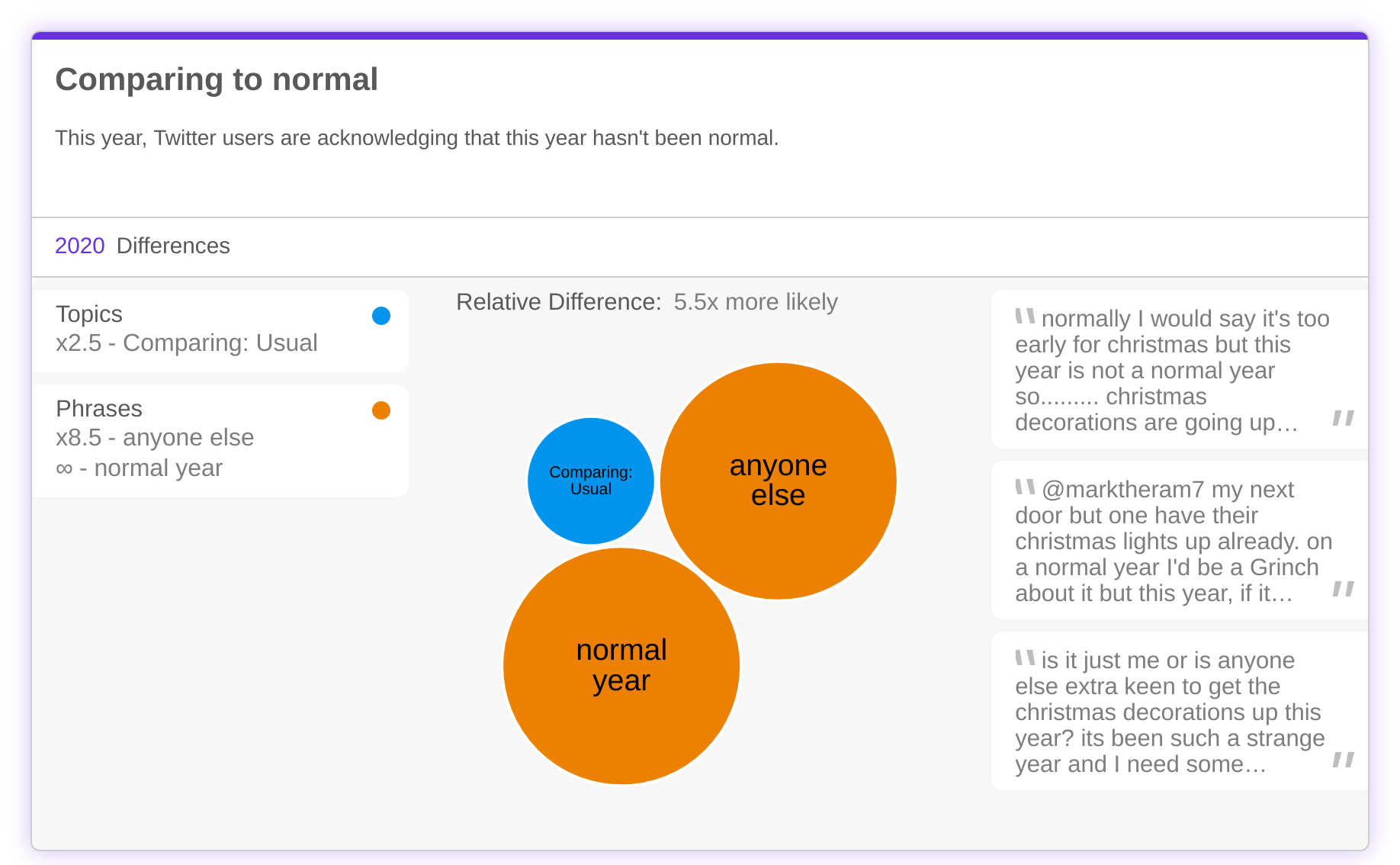 Don’t fight the urge
Last year, the debate around Christmas decorations still caused much of a stir. Twitter users were 2.1x more likely to use angry language when discussing the topic, and some confessed that they were ‘fighting the urge’ to put up their decorations. This year however, people have been tempted to the dark side (or should I say light side), and seeing putting their decorations up early as a defiant act to be proud of. 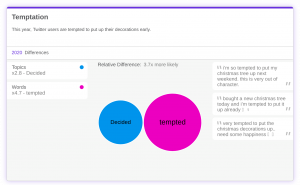 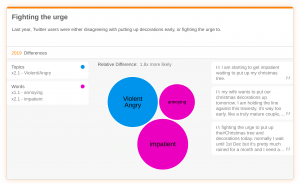 An emotional affair
As with much of this year, emotions have ran high. Twitter users are twice as likely to express their emotions when discussing decorations this year. However, there is some science behind it. Psychoanalyst, Steve McKeown, claims that: “In a world full of stress and anxiety people like to associate to things that make them happy and Christmas decorations evoke those strong feelings of childhood.” 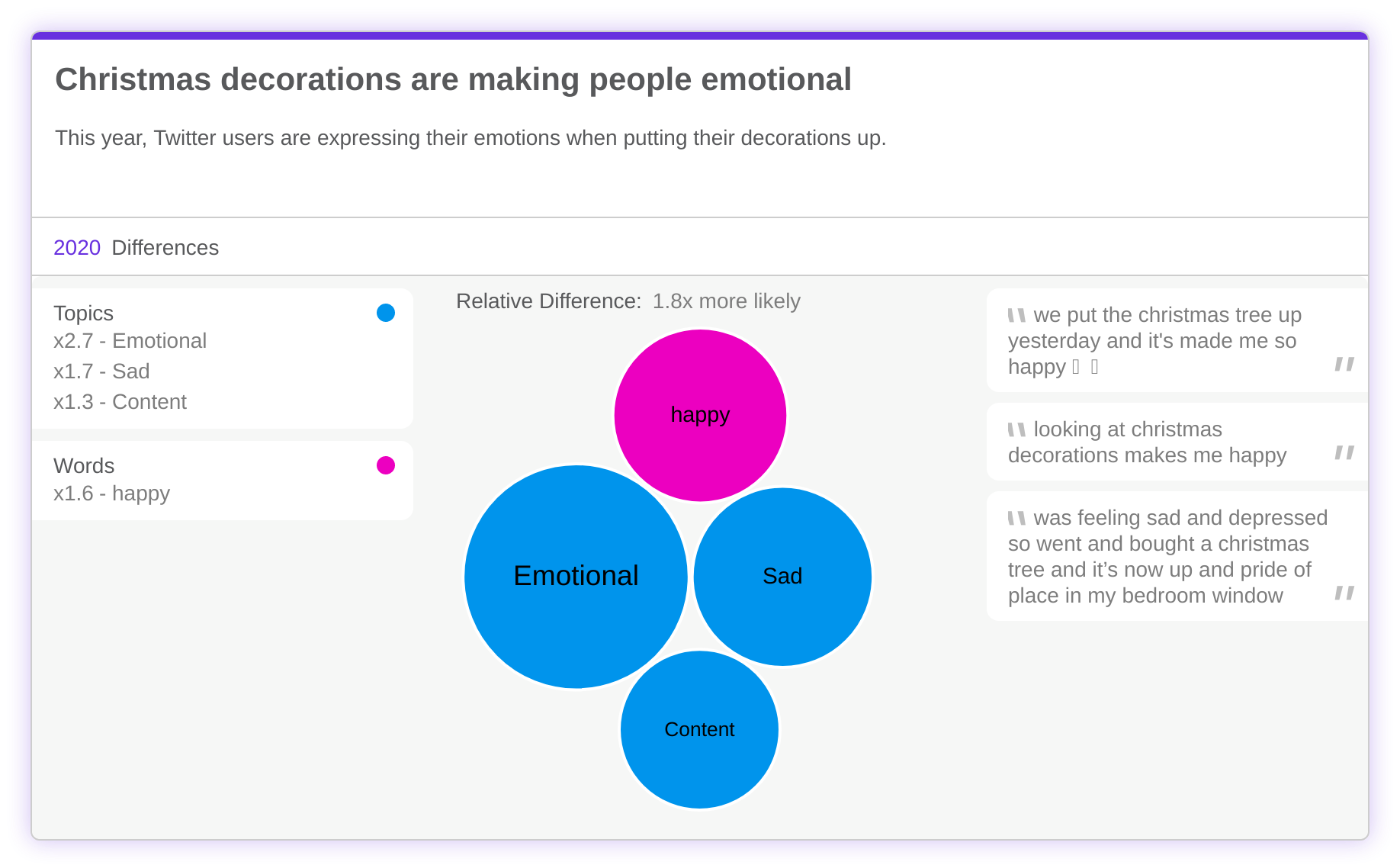 Good for our mental health?
The Light Up Locally campaign is calling for early Christmas decorations to boost mental health and support the NHS over lockdown 2. However some Twitter users are still shocked at early decorations, describing the ‘premature’ act as ‘mental’ in itself. Its fair to say that this increase in early Christmas decs has made an impact on Scrooge-like behaviour on Twitter! 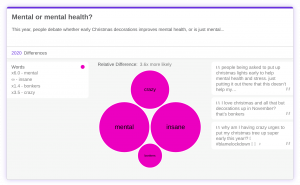 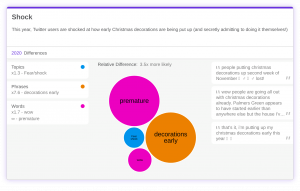 Actionable insights:
This year is unlike any other. And while some of us might not exactly be onboard with the early Christmas campaigning, tapping into current conversations and social insights can help brands and agencies better understand their audience. Yes, people might be bonkers to put their Christmas trees up six weeks in advance, but it shows a need for excitement, a light at the end of the tunnel and that going against the grain is the new normal.

Don’t miss our next Spotlight Series webinar: Has coronavirus stolen Christmas?, on December 17th  to discover more about how agencies and brands have been challenged this year, and to find out whether, despite all odds, there will be magic this Christmas.

While you’re here, you might also like:
I’m panicked and I’m stressed, but I want more Black Friday deals…
Christmas Cards from the Trenches: Comparing the language of WWI
What can I learn from social listening data

Contact us using the form below and we’ll show you how!